When Gov. Deval Patrick signed an oral chemotherapy parity bill into law on January 5, Massachusetts joined more than 20 states requiring health plans to cover oral cancer pills at a rate no less favorable than standard intravenous (IV) chemotherapy. The new law tells insurers that they cannot require higher patient costs for oral chemotherapy, and it helps ensure that all forms of chemotherapy are accessible and affordable to Massachusetts cancer patients. 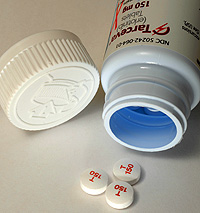 The new law ensures that oral chemo is covered at rates equivalent to IV chemo, and it has the potential to trim thousands of dollars in out-of-pocket costs for cancer patients receiving their chemo in pill form.

“The parity provided by this bill is a recognition that cancer treatment is changing,” says Dana-Farber President Edward J. Benz Jr., MD. “Increasingly, pills are replacing IV chemotherapy in the clinical setting, and some newer cancer drugs are only available in pill form. In fact, since 2012, eight of the 11 oncology drugs approved by the FDA are oral treatments with no IV equivalent.”

While chemotherapy pills and capsules have been around for years, they have become more common in the past decade, and experts see them as a critical part of cancer treatment in the future. For example, the drug imatinib (brand name Gleevec), which is the most effective treatment for chronic myelogenous leukemia, is only available in pill form, as is a newer medication, lenalidomide, used to treat multiple myeloma and myelodysplastic syndromes.

Oral medications account for around 25 percent of 400 cancer medicines currently in development, according to a 2008 report from the National Comprehensive Cancer Network. And researchers are continuing to uncover new potential benefits that may be gained through the use of targeted medications available only in pill form.

The new Massachusetts legislation earned broad support from a range of organizations, including the American Cancer Society, the Leukemia & Lymphoma Society, and Dana-Farber’s Legislative Action Network, whose members have actively lobbied legislators to enact this important bill since it was first introduced in 2009.

Learn how to manage oral chemotherapy at home through easy-to-use drug diaries.

Join the Legislative Action Network and help advocate for policies that improve the lives of cancer patients.

8 thoughts on “Better Coverage for Oral Chemo: Why It Matters”