This Veteran’s Day, Dana-Farber thanks our patients, survivors, families, and friends who have served or are serving in the armed forces, including survivors Stacey Carroll, Ben Groen, and Tim Crowley, who tells his story below.

In June 2010, I was diagnosed with acute myeloid leukemia (AML), a fast-moving disease where too many immature white blood cells are present in the blood and bone marrow, after doctors found abnormalities in routine blood work for the Marines. My wife, Julie, and I were in shock. We had just celebrated Father’s Day with our two young children, Jack and Kate, and now we would be spending the foreseeable future at Dana-Farber/Brigham and Women’s Cancer Center. 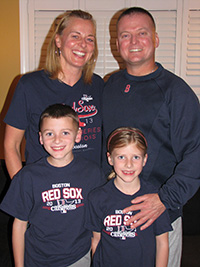 As a Massachusetts State Trooper and a major in the Marines in active duty for five years and the reserves for 10, I was trained to handle the unexpected. But nothing can prepare you for a diagnosis like this. I went from being an avid runner, active father, and capable trooper to spending 120 days in a hospital bed and dropping 40 pounds. This was difficult, but the most excruciating part of treatment was seeing friends I made at Dana-Farber pass away from AML knowing that it easily could have been me in their places.

Luckily, I was fortunate enough to be matched with a stem cell donor, a 19-year-old from Israel, and underwent a transplant in October 2010, giving my body an entirely new immune system. This was tough, as I had to stay isolated and wear a mask and gloves in public, which meant staying on the sidelines and watching my son’s t-ball games from the car.

After the transplant, my battle continued with graft versus host disease (GVHD), a complication from the stem cell transplant that resulted in eye, skin, and nausea issues, as well as osteonecrosis in my knees due to high doses steroids and full-body radiation, which stalled my running progress. It was frustrating going from being active to having so many restrictions, but my wife effectively became my drill instructor and kept me in line, telling me what I had to do to get better and truly embodying the Marine motto of Semper Fidelis – always faithful.

She wasn’t the only one. Throughout my treatment, my friends in the Massachusetts State Police stood by my side, organizing a fundraiser to support my care before my transplant and again last year in my hometown of Holyoke, Mass. Together with the support of friends, family, and the care team at Dana-Farber, they helped get not only me, but Julie, Jack, and Kate through the past few years.

As I continue to recover, my Marine training helps me focus less on what I can’t change about my situation, and more on taking each day as it comes and enjoying time with my family and friends. Since my diagnosis, Julie and I have vowed to travel more and do the things we’ve always wanted to do, now that we realize how short life really is.

It’s taken the Marine values of honor, courage, and commitment for us to keep going through this fight, which is far from over, as Julie is undergoing her own treatment at Dana-Farber for a battle with breast cancer, but we know we are in good hands and we are ready to face life’s next curveball together.

Hear more about Tim’s story in his interview during the 2013 WEEI/NESN Jimmy Fund Radio-Telethon.