The 34-year-old Navy SEAL combat veteran spent 11 years serving his country, and has seen courage in the actions of his fellow SEALS and through the children of fallen comrades who must learn to grow up without their fathers. 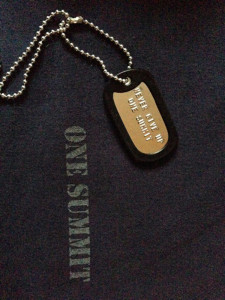 Now living in Boston, LaReau has found a way to channel these two examples of bravery. Through a nonprofit program he started called One Summit, he is pairing up SEALS with young cancer patients from Dana-Farber/Boston Children’s Cancer and Blood Disorders Center and other hospitals for a day of indoor rock climbing activities in which confidence and resiliency grow with each step taken up the wall.

This past Saturday, 15 cancer patients ranging in age from 5 to 13 joined LaReau and other past and active SEALs in “Climb for Courage” at Central Rock Gym in Watertown, Mass.

LaReau started One Summit while earning his master’s degree in Public Administration at Harvard’s Kennedy School of Government last year. “I was inspired by the strength of my mother as she battled cancer, and by the men I had the privilege to work alongside. After my mother passed away, I started volunteering and I saw young children battling cancer and I wanted to help,” says LaReau. “I was lucky to work with an amazing group of men in the military. There were no problems we could solve alone. We had to work as a team and trust each other. That’s what we are trying to instill with the children.”

Parents were encouraged to drop off their kids and give them an opportunity to bond with their mentor, and to impart some of the lessons they were teaching, such as goal setting and overcoming the fear of a new challenge.

“The SEALs are really on a level with the kids, making them feel special but taking the cancer out of it,” explains Kate Cusack, activities specialist in the Jimmy Fund Clinic at Dana-Farber. “Both these groups are warriors, and both are survivors. The kids just need to learn to conquer their fears, and the SEALs help them do that.”

This is the second time LaReau has run a Climb for Courage event with Dana-Farber; after the first program, in March, Cusack said she heard from many families about what a difference the experience of working with SEAL mentors had made for their children. Saturday’s participants were similarly impacted.

“It was such an awesome experience,” says Hope Laiter, 13, a melanoma patient at Dana-Farber/Boston Children’s Hospital. “When I first started climbing I was a little nervous, but once I started bonding with my SEAL, it gave me courage to rely and trust others and keep going to the top. It’s definitely something I can relate to with my treatment; I’m almost at the end and I’m going to keep fighting.”

Kids who participated in the program got all the gear so they could continue to climb, as well as a “courage tool” — a set of dog tags engraved with their name and the motto, “Never Give Up.” The dog tags were given to the kids when they overcame a particular challenge during the day.

When they first arrived Saturday, says LaReau, many of them didn’t think they could scale the highest 40-foot wall in the gym. By taking things one hand and toehold at a time, however, Hope and all of the rest conquered their fears and overcame the challenge.

This is the message that LaReau is hoping to get across with One Summit – that, just like climbing a rock wall, by dealing with cancer one chemotherapy treatment or one shot at a time, kids can make it through.

Says LaReau: “I think these kids can show the SEALs a different type of courage.”