Two decades ago, Dana-Farber blood cancer researcher Sophia Adamia, PhD, left her home in Georgia, a country with a turbulent past located at the crossroads of Western Asia and Eastern Europe.

Not until last May did she return to Georgia, to participate in a conference organized by the State Minister of Georgia for Diaspora Issues. She was among a group of emigree doctors and scientists from Georgia who gathered for four days to form a network and share their experiences. 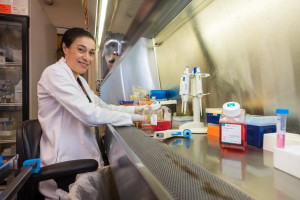 “It was a big deal,” Adamia explains. “It was the first time I had spoken the Georgian language publicly since I left.

“I talked about what I have done to succeed, rising from the ashes like a Phoenix. My most important message was to let the younger generation be free: Let them make the mistakes they want to make, because every mistake leads to a discovery.”

Georgia, which Adamia calls “the balcony of Europe,” was part of the Soviet Union and despite declaring independence in 1991, remained under Communist leadership until 2003 when a peaceful transformation, known as the Rose Revolution, ushered in the pro-Western government it has today.

Dissatisfied with life under Communism, Adamia first emigrated to Turkey, then to Canada, where she earned PhD in Oncology from the University of Alberta and became a Canadian citizen.

Joining Dana-Farber in 2006, she did postdoctoral research on multiple myeloma, a type of blood cancer that develops in plasma cells found in the bone marrow; Waldenstrom’s Macroglobulinemia, a type of non-Hodgkin lymphoma; and leukemia, cancer of the blood cells, where her work has led to new developments in research.

Adamia says she always wanted to study biomedical science for two reasons. One was to keep a promise she made to her mother, who died of multiple myeloma. The second was her belief in science “as an absolute freedom that cannot be taken away under any circumstances.”

As a teenager, Adamia became restless under the oppressive regime, which was strongly anti-American and forbade, among other things, jazz music.

“My father had a small radio in the attic in our old house, where we listened to jazz and the Voice of America, read photocopied books of  American authors,” she says. “It was our family secret.”

Adamia was part of the movement of younger Georgians who wanted more autonomy, drawing attention from the KGB, the Soviet security agency, which summoned her for interviews. After the one such interview (detail or rephrase), she decided it would be wise leave the country immediately. She crossed the border into Turkey, where she was a refugee for three years and worked at the American Bookstore in Istanbul before moving to Canada.

Reflecting on her journey, Adamia says, “the trip made me think I’m not really Georgian anymore, and I’m not really North American, either. But the best feeling is when you discover you are a citizen of the world.”