When Eli came home from baseball practice this past April with bruises on his body, his mom Jessica, an internal medicine specialist, and his dad Bryan, a trauma surgeon, didn’t think anything of it. “We assumed his coach was just throwing hard pitches, because every time Eli got hit with the ball, his skin bruised,” says Jessica.

But 10-year-old Eli didn’t let a few bruises stop him. He continued to play baseball and basketball, work hard in his fifth grade classroom and goof off with his two younger sisters, 6-year-old Anna and 3-year-old Sarah.

In May, Jessica and Bryan’s peace of mind vanished when Eli pointed to what he thought was another bruise. Because of her medical background, Jessica knew right away that the spots on her son weren’t bruises; they were petechiae. Caused by broken blood vessels, petechiae are small red or purple spots that can indicate a more serious underlying condition.

That Friday, Jessica took Eli to his pediatrician in their hometown of Atlanta where Eli’s blood work justified his parents’ concern. His platelet, red and white blood cell counts were extremely low.

“At first, I was concerned about leukemia or other types of cancer because the symptoms can present similarly,” says Jessica. To confirm a diagnosis, Eli’s pediatrician scheduled a bone marrow biopsy.

Meanwhile, Eli graduated from fifth grade and his family celebrated the start of summer vacation with a trip to the beach.

Back home, Eli’s bone marrow biopsy results solved the mystery of his bruising, petichiae, low blood cell count and uncontrollable bleeding. Eli had aplastic anemia, a rare blood disorder that occurs when the body’s bone marrow stops producing enough new blood cells. “I was sobbing,” says Eli. “I had no idea what that meant or what was going to happen.”

Eli’s best treatment option was a bone marrow transplant from one of his sisters, as his parents could not be donors. Eager to help, both girls were tested to see if they were a good match. Waiting for the results wasn’t easy. Because Eli lacked white blood cells, his body was unable to fight off common illnesses. “We weren’t supposed to be in the hospital at that point but every time Eli got a fever, he was back in the hospital. It happened on and off like this for months,” says Jessica. While Eli was in the hospital for a fever, the results came back: his sisters were not a match.

Eli’s parents were devastated. “We met with doctors who told us about the shortcomings of traditional immunotherapy drugs and outlined the risk of rejection when receiving bone marrow from an unrelated donor,” says Jessica. She spent hours researching alternative treatment options. That’s when she came across The Shimamura lab at Dana-Farber/Boston Children’s Cancer and Blood Disorders Center. Led by Akiko Shimamura, MD, PhD, the lab hosted a number of promising clinical trials for children with various blood disorders.

Eli and his mom made the journey to Dana-Farber/Boston Children’s in late June. Shimamura met with the family and immediately hospitalized Eli for his high fever. While Eli rested, Shimamura got to work enrolling Eli in a phase 2 clinical trial. The 26-week treatment period would be long and difficult, but if successful, the combination of immunotherapy drugs and transfusions would allow the bone marrow to heal itself, eliminating the need for a bone marrow transplant altogether.

In early July, Eli began his first round of transfusions. A huge Red Sox fan, Eli often watched games during his transfusions. As his blood cell counts began to normalize, Eli got to watch a game at Fenway Park. “The person in front of me caught a ball and he turned around and gave it to me,” he says with a smile on his face.

Hope on the Horizon

While Eli fights aplastic anemia in Boston, his community fights with him in Atlanta. Eli’s family has held fundraising cookouts, his baseball team has sent cards, and his community members have joined bone marrow donor registries and given blood in his honor. Inspired by the cancer patients on Eli’s various hospital floors, his sister Anna donated her hair to Locks of Love. 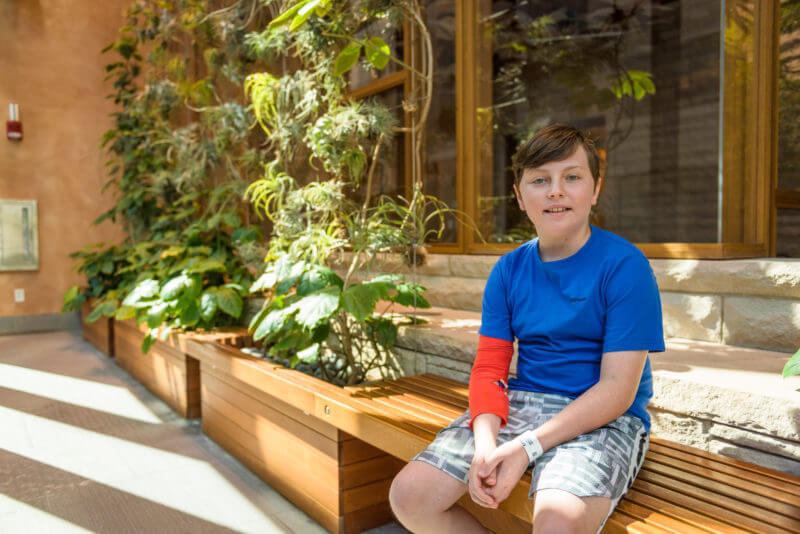 At a recent appointment, Eli sits bravely in the transfusion room, leaning on his mom and grandma for support. “Everything is going to be OK. It’s really not as bad as it seems,” he says. “Once you get your first transfusion, it becomes easier and easier. I wouldn’t say it’s been an easy summer, but it’s been a fun summer. Mom and I have gotten a lot closer. I don’t think we’ve spent more than one day apart.” If everything goes as planned, Eli will finish his transfusions in October and begin a 52-week follow up period.

Eli has had to make major changes to his active lifestyle, but one thing has stayed the same: Eli and his family will continue to fight his aplastic anemia together.

Tags:
Your next story: Immunotherapy for Ovarian Cancer: What's New?

Your next story: Signs and Symptoms of Multiple Myeloma