The drive from Plymouth, Massachusetts, to Raleigh, North Carolina, is about 750 miles. If you’re up for the drive, Jenn Anderson notes, plan on spending a lot of time on I-95 and consider extending the trip with a stopover in Delaware.

It’s a familiar route for Anderson, who was planning to move south with her family in 2015. However, two days before they were scheduled to leave, Anderson found a lump in her right breast. She soon learned she had stage II breast cancer.

Jenn and her husband, Glenn, were speechless. “I remember turning to my husband and asking, ‘Are you in the same nightmare that I’m in right now?’” Jenn remembers.

Anderson began treatment at the Susan F. Smith Center for Women’s Cancers at Dana-Farber under the care of Meredith Faggen, MD, medical director of Dana-Farber/Brigham and Women’s Cancer Center in clinical affiliation with South Shore Hospital.

“I remember the first person who came into the room said to me, ‘First of all, you’re going to be fine,’” recalls Anderson. “That was all we needed to hear.”

In the next 18 months, Anderson underwent four months of chemotherapy, a bilateral mastectomy, 33 radiation treatments, and reconstruction surgery. During all of it, Glenn said he felt helpless, but anytime uncertainty crept in, he returned in his mind to that first meeting at Dana-Farber. 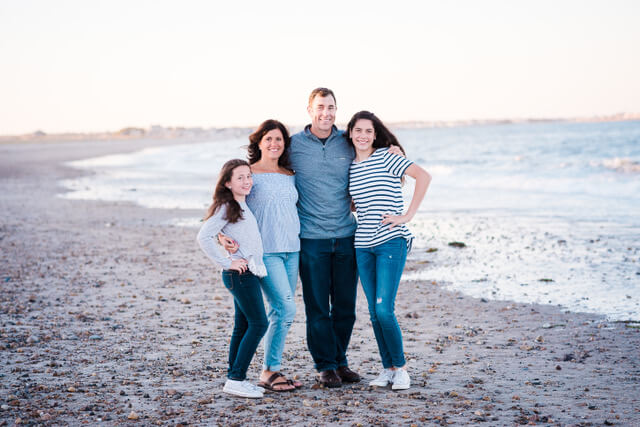 “People would ask me, how do you feel—are you nervous?” says Glenn. “I’d tell them, ‘No she’s going to be fine. Jenn’s doctors said she was going to be fine, and if they said it, that’s it.’”

In January 2016, the promise was fulfilled: Anderson was cancer-free. To celebrate, the family visited Disney World, finally taking the trip they had always talked about. Their travels didn’t stop with Mickey Mouse; Anderson says her experience has made her say yes to trips she’s always wanted to enjoy—whether that’s hiking the Grand Canyon with her husband and two daughters or exploring Costa Rica.

“We were so lucky,” Anderson says. “Dana-Farber healed me, they took care of my family, and they put me back together.”

And as for completing that 750-mile trip to North Carolina one day, Anderson says relocating will have to wait. Her family is happy in Massachusetts, and there’s no place like home.

Hear the Andersons tell their story: