From a Rare Cancer Gene to a Fundamental Life Process: The Nobel Prize-Winning Research of William G. Kaelin, Jr, MD

The insights Kaelin and others gleaned at the laboratory bench are now beginning to make a difference for patients.

In 1992, when he launched his own Dana-Farber laboratory, William G. Kaelin, Jr, MD, was well-positioned to make potentially landmark discoveries.

As a physician, he had an encyclopedic knowledge of human diseases, including rare genetic conditions like von Hippel-Lindau (VHL) disease, which is associated with an elevated risk of benign and malignant tumors, particularly in the kidney. He also knew that these tumors were famous for producing specific hormones that are normally only produced when oxygen is scarce. And having just completed a post-doctoral fellowship in the laboratory of Dana-Farber cancer gene scientist David Livingston, MD, Kaelin was well-equipped to design experiments to solve interesting and important problems from a genetic viewpoint.

While in Livingston’s lab, Kaelin had studied a tumor-suppressor gene, RB¸ which, when mutated or lost from the cell, allows tumors to form. Now heading his own lab, Kaelin sought a new challenge. Shortly after launching his lab, he decided to focus on the VHL gene, which had just been isolated in 1993. There was much to learn about its normal function and how inheriting a mutant VHL gene could set the stage for cancer.

Kaelin hoped that by choosing to study the mutant gene that caused VHL disease he would help reveal the answer to a fundamental, long-sought question: exactly how the body senses and rapidly adapts to changing levels of available oxygen. But that’s exactly what happened. And in October 2019, he and two other physician-scientists, Greg Semenza of Johns Hopkins University and Sir Peter Ratcliffe of Oxford University, were honored with the Nobel Prize for Medicine for their inter-related discoveries of the oxygen-sensing system in cells.

Oxygen-sensing and adaptation is a crucial process for all multicellular animals and is involved in normal body functioning — as in the increased demand for oxygen during exercise and in adapting to high altitudes where oxygen is less plentiful — as well as playing roles in cancer, heart attacks, strokes, wound healing, inflammation, and anemia. Already, the discovery of the mechanism by Kaelin, Ratcliffe and Semenza is advancing the development of new drugs for cancer and anemia and providing a wealth of insights into health and disease. 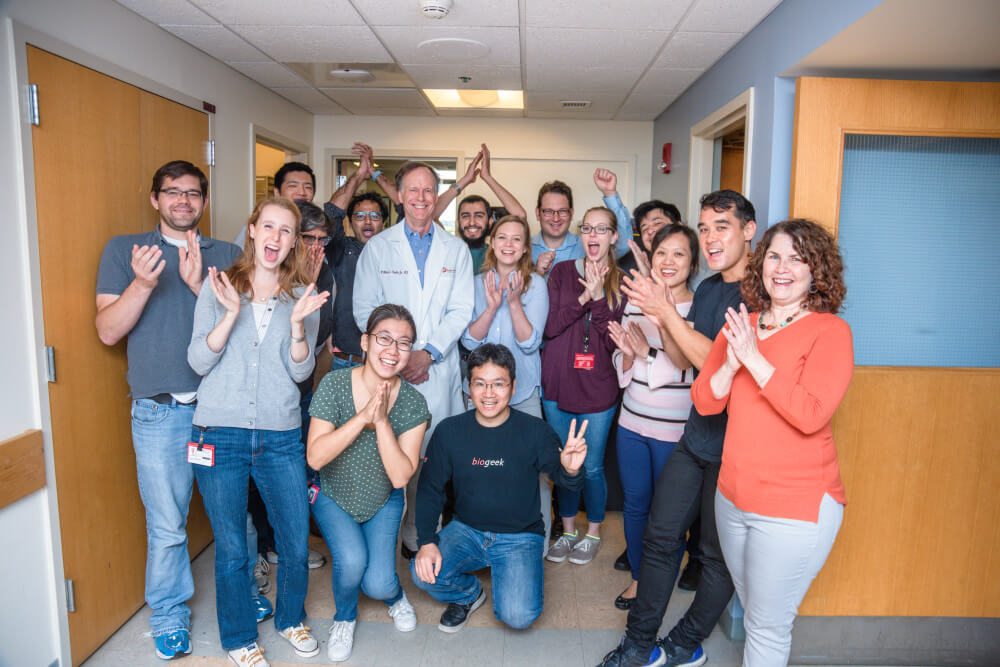 Kaelin and members of the Kaelin Laboratory on the day Kaelin won the Nobel Prize for Medicine.

Kaelin’s first objective was to test the idea that VHL was a tumor-suppressor gene. A tumor-suppressor gene makes a protein that helps tamp down budding cancers before they can become dangerous. People who inherit an abnormal or missing copy of the VHL gene from one of their parents are prone to developing kidney tumors and other cancers when the remaining copy of the gene (from their other parent) is damaged or lost, as can happen spontaneously over time. Kaelin confirmed in 1995 the tumor-suppressing function of VHL by showing that correcting the loss of VHL in laboratory-grown kidney cancer cells rendered them incapable of causing cancer when transplanted into mice.

Kaelin suspected that VHL, in addition to suppressing tumors, played a role in oxygen-sensing.

“I think my clinical training was very helpful because I knew that the tumors that were linked to VHL disease are extremely rich in blood vessels, and sometimes cause the body to make too many red blood cells,” Kaelin explains.

These two responses — the formation of new blood vessels to feed the tumor, known as angiogenesis, and a ramping up of red blood cell production to increase the ability of blood to carry oxygen — would be how the body might react if a tissue wasn’t getting enough oxygen.

In 1996, Kaelin discovered that cells lacking the VHL gene continuously sent out low-oxygen distress signals — even when grown in the laboratory in an oxygen-rich environment.

“This was the first demonstration that if a cell didn’t have an intact VHL gene, it couldn’t sense whether it was getting enough oxygen,” he says.

It was beginning to look like VHL disease and the mutant gene was indeed a “Rosetta stone” for understanding of the body’s oxygen-sensing system.

[Greg Semenza, Sir Peter Ratcliffe, and I] trained to do basic, fundamental, mechanistic research in hopes that if we understood the systems we were studying well enough over time, opportunities to translate would come along and fortunately, that happened.

VHL targets other proteins for destruction

In the mid- to late-1990s, Kaelin and other researchers showed that the VHL protein interacts with a number of other proteins in the cell. In some cases, VHL marked other proteins for elimination, like trash thrown in a disposal. What gave VHL this special function was that it is a so-called “ubiquitin ligase” that can bind to and apply a small “miniprotein” tag to a protein, dooming it to destruction.

“By 1998, we had learned that VHL was required for oxygen sensing, and suspected it was also in charge of degrading specific proteins in the cell. So now we had at least one component of the oxygen-sensing pathway,” Kaelin explains.

Previously, another component of the oxygen-sensing mechanism had been identified when Semenza isolated a genetic control unit, known as an “enhancer,” that responded to low oxygen levels, or hypoxia. This enhancer, a short piece of DNA, was located on the gene for erythropoietin (EPO), a hormone that activates the manufacture of red blood cells in the bone marrow. Semenza named the protein that binds to, and activates, this enhancer hypoxia-inducible factor, or HIF. The “inducible” part of its name stemmed from the fact that it is normally destroyed when oxygen is plentiful and it is not needed. HIF responds to low oxygen by ramping up the production of EPO, which in turn causes the manufacture of more oxygen-carrying red blood cells.

HIF is considered the master regulator of the body’s response to hypoxia. When more oxygen is needed — as during exercise — it can turn on a number of genes, including the EPO gene, and VEGF, which controls angiogenesis, as well as genes involved in the body’s metabolism.

But what was the connection between VHL and HIF? In 1999, Ratcliffe showed that cells lacking VHL couldn’t destroy HIF. Seizing on this important clue, Kaelin and others showed in 2000 that HIF — or, more precisely, a subunit called HIFalpha (one of the two components of HIF) — was one of the target proteins that VHL could tag for elimination. What was coming into focus was how VHL and HIF worked together as part of the oxygen-sensing control system.

When there was plenty of oxygen in a cell’s environment, HIF wasn’t needed to turn on genes to make more blood cells or blood vessels. But how would VHL know whether oxygen was present and hence whether to target HIF for destruction?

The answer came in 2001, when both Kaelin and Ratcliffe, working independently, showed that a specific oxygen-dependent chemical gets added to HIF-alpha, which then allows VHL to bind to HIF. VHL then marks HIF for destruction via the cell’s garbage disposal system known as the proteasome. This goes on constantly when there’s sufficient oxygen — VHL keeps binding to HIF-alpha, triggering its destruction before the cells accumulate a lot of HIF. Later work by Ratcliffe, Steven McKnight at UT Southwestern, and Kaelin showed that the oxygen-dependent chemical flag gets added by specific enzymes (proteins that do chemical work) called either the PHD or EglN “prolyl hydroxylases.”

On the other hand, if oxygen levels drop, the oxygen-sensing mechanism goes into play. VHL is unable to bind to HIF-alpha and tag it for elimination. As a result, HIF accumulates in the cell and turns on an array of genes to compensate for hypoxia (low oxygen). Thus, VHL is a key to the oxygen-sensing system.

In tumors without an intact version of VHL gene, HIF isn’t destroyed and instead accumulates, turning on a number of genes that can contribute to the cancer process, including genes that can stimulate cell proliferation, invasion, and angiogenesis. In effect, these tumors co-opt the normal oxygen sensing pathway for their own evil purposes.

From bench to bedside — developing drugs for cancer and anemia

The insights Kaelin and others gleaned at the laboratory bench are now beginning to move to the bedside — that is, make a difference to patients. He says a biotech company has made small-molecule drugs that inhibit a specific form of HIF, called HIF-2, as an approach to treating cancer. “They look very promising in phase 2 trials,” Kaelin says.

“There are actually millions of people around the world who don’t have enough red blood cells for a variety of reasons,” Kaelin says.

A drug to treat anemia, based on the new understanding of oxygen sensing and how to activate HIF and EPO to rev up the production of red blood cells, has been approved in China and Japan and U.S. submission is imminent.

To Kaelin and his co-Nobel Laureates, these drugs and what will surely be more to follow are the payoff for pursuing curiosity-driven science.

“All three of us trained to do basic, fundamental, mechanistic research in hopes that if we understood the systems we were studying well enough over time, opportunities to translate would come along and fortunately, that happened.”