Ali Mercy was an eight-year-old with relapsed acute lymphocytic leukemia (ALL) in need of a stem cell transplant. First, however, his father Abrahim had to find a country willing to provide Ali with the life-saving procedure.

Transplants were not performed in the United Arab Emirates (UAE), where Abrahim and Ali lived together in the city of Dubai. The UAE government typically sent its citizens to Germany for transplants, but because Abrahim was a native of India, his son was denied such assistance.

Left on his own, Abrahim reached out to medical officials in Asia, Europe, and North America. Only one person was willing to help: Leslie Lehmann, MD, clinical director of the Pediatric Stem Cell Transplant Center at Dana-Farber/Boston Children’s Cancer and Blood Disorders Center.

“Dr. Lehmann immediately got back to me and said that Dana-Farber/Boston Children’s would treat Ali,” recalls Abrahim.

Shortly thereafter, in February 2014, father and son traveled the 6,600 miles from Dubai to Boston. It was their first time in the United States, and Ali’s first plane ride. The mounds of white fluffy stuff they saw after their arrival also made a big impression; Ali had never seen snow.

Lehmann was true to her word. Although a perfect donor match could not be found for Ali, he had a successful cord blood transplant — using stem cells taken from an unrelated umbilical cord donor — on April 8, 2014. There were complications, including graft versus host disease (GVHD) and kidney trouble, but Ali’s leukemia went into remission. He and his father now live in Mansfield, Mass., where Ali attends high school.

“Ali has such a beautiful and resilient spirit – he gave 100% effort towards his own recovery every day, and that inspired everyone one his team,” says Lehmann, also medical director for international hematology/oncology and bone marrow transplants at Dana-Farber/Boston Children’s. “It is so wonderful to see him develop into a creative young adult who makes the world brighter for all those who know him.” 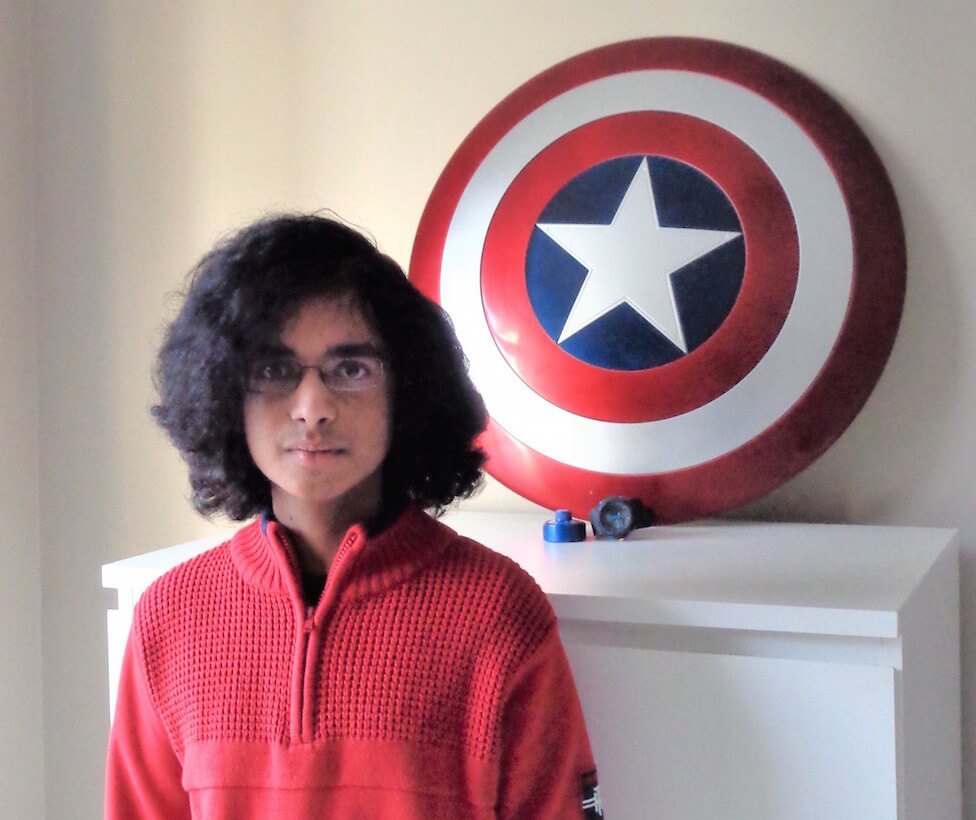 All my problems, swept up by a magic broom.

Shedding away the words of yesterday.

It doesn’t what they do or say.

I can feel your thoughts like the winter snow,

Warming my skin with the slightest blow.

Why won’t you shine on me today?

Please don’t leave me and go away.

When the stars are bright.

When the stars are bright.

The journey that led Ali and Abrahim Mercy to Dana-Farber/Boston Children’s began with Ali’s 2010 ALL diagnosis. Chemotherapy initially put Ali’s ALL into remission, but three years later, it returned — this time having metastasized to Ali’s central nervous system. Soon he could feel nothing below his waist and was using a wheelchair for mobility.

“I was devastated,” says Abrahim. “I felt, at this point, there was nothing I could do to save him.”

Then Dana-Farber/Boston Children’s entered the picture. Its International Patient Services office helped the Mercys in their transition to the United States, and Lehmann and other caregivers including physician assistant Margaret Buonanno, MS, PA-C, and nurse Kelli Sheehan, BSN, RN, became like family. During Ali’s long post-transplant recovery time, when he was isolated in his hospital room for four months due to his weakened immune system, they would bring in games to play with him.

“The people there were just so friendly that after a couple weeks I didn’t feel as if I was in a hospital — I started to feel at home,” says Ali. “Along with my father, they made one of the most painful times of my life into something worth remembering.”

Growing up and giving back

Today things are looking up for Ali, who will turn 15 just before Christmas. His ALL remains in remission, he is walking well, and he has developed a great love for crafting short stories and poetry (see sidebar). He says that cancer has provided him with insight and maturity he believes will help him as a writer.

His father has also gained a new perspective from what the two of them have gone through. The outpouring of support Ali has received from his Boston caregivers has compelled Abrahim to devote himself to helping other families impacted by cancer; he is now a member of the Pediatric Patient and Family Advisory Council at Dana-Farber, and passes on wisdom to new ALL parents through the One-to-One program.

“People need to know when they hear the word cancer, they should not panic,” says Abrahim. “Have faith, and have hope, and know places like Dana-Farber/Boston Children’s will be there for you.”