For Kidney Cancer Survivor, Timing is Everything | Dana-Farber Cancer Institute

For Kidney Cancer Survivor, Timing is Everything

Shaun Tierney would never claim he was lucky to develop stage IV kidney cancer, but he strongly believes that the timing of his diagnosis prolonged his life.

Tierney learned he had kidney cancer, also known as renal cell carcinoma (RCC), in February 2007. By this point the disease was in both kidneys and had already metastasized to his back, ribs, and hip, leaving him in constant pain. An oncologist near his home in western Massachusetts told the 51-year-old engineer and father of two daughters and one son to get his affairs in order. Nothing could be done to extend Tierney’s life.

This is where what Tierney calls his “good timing” came into play. Shortly before his diagnosis, the U.S. Federal Drug Administration approved a drug called sunitinib malate (Sutent) for the treatment of kidney cancer. And when Tierney sought out a second opinion at the Dana-Farber/Brigham and Women’s Cancer Center (DF/BWCC), he learned that oncologists there were already using sunitinib malate as a first-line therapy, even in patients with late-stage disease like he had.

Oliver Sartor, MD, an oncologist from New Orleans then practicing at DF/BWCC, told Tierney and his wife Mary that he was very hopeful that Sutent could halt his disease progression. Sartor also knew radiation techniques that would likely reduce the bone metastases and associated pain. Until this point, Tierney believed he had months to live and would not survive to see any grandchildren.

“We left our meeting with Dr. Sartor with the most powerful medicine: the slightest glimmer of hope,” Tierney says today. “He explained the concept of living with cancer as a chronic illness. I had already been living for 20 years with a different chronic illness, multiple sclerosis, so I thought, ‘I’ve done this before. I can do it again.’”

Dana-Farber’s Lank Center for Genitourinary Oncology provides compassionate care and the most effective therapies for prostate, kidney, and testicular cancer, as well as many other rare and common cancers.

Timing has always been an important part of Tierney’s life. If he had not stopped one day in 1972 to offer help to a woman with a stalled car, he knows, he would not have had Mary at his side to this day. He gives her full credit for motivating him to push through the rough patches during the past 12 years.

An outcome like Tierney’s was not commonplace at the time of his diagnosis. Until the early years of this century, kidney cancer was still strongly resistant to chemotherapy and radiation. It could only be treated effectively when caught early, and in more than half the cases (such as Tierney’s), it was not. Then a new wave of therapy options began emerging, including at least six FDA-approved drugs between 2005 and 2010, and long-term survivorship increased dramatically.

Tierney rode this wave. In the spring of 2007, after several weeks of radiation, he began taking Sutent at home as an oral medication. Today he makes the three-hour drive to Boston for scans and check-ups, and in between these appointments has blood work at a facility near home. The tumors throughout Tierney’s body stopped growing, and then shrunk 50 percent within six months of his beginning treatment.

Toni Choueiri, MD, has headed Tierney’s care since 2008, when Sartor left DF/BWCC to help rebuild New Orleans’s medical infrastructure following Hurricane Katrina. Director of the Lank Center for Genitourinary (GU) Oncology at DF/BWCC and the Jerome and Nancy Kohlberg professor of Medicine, Choueiri currently sees Tierney every three months and alters his Sutent dosage depending on the severity of side effects or when Tierney’s tumors show evidence of growth. Choueiri credits a support team of nurses, patient navigators, advanced practitioners, administrators, and pharmacists for playing a role in assuring patients like Tierney receive optimal care and communication.

“Today, kidney cancer patients live much longer with stage IV disease, and we are seeing more positive outcomes due to new classes of agents, many being developed and led by Dana-Farber scientists,” says Choueiri.

Kidney cancer was also known in the past to be radiation-resistant — but new ways of delivering radiation, such as stereotactic body radiation therapy (SBRT), can be used in select cases of the disease, especially if just a few spots are growing. Tierney is one of those cases: soon, he will undergo SBRT for a third time.

The timing, doctor and patient agree, couldn’t be better. 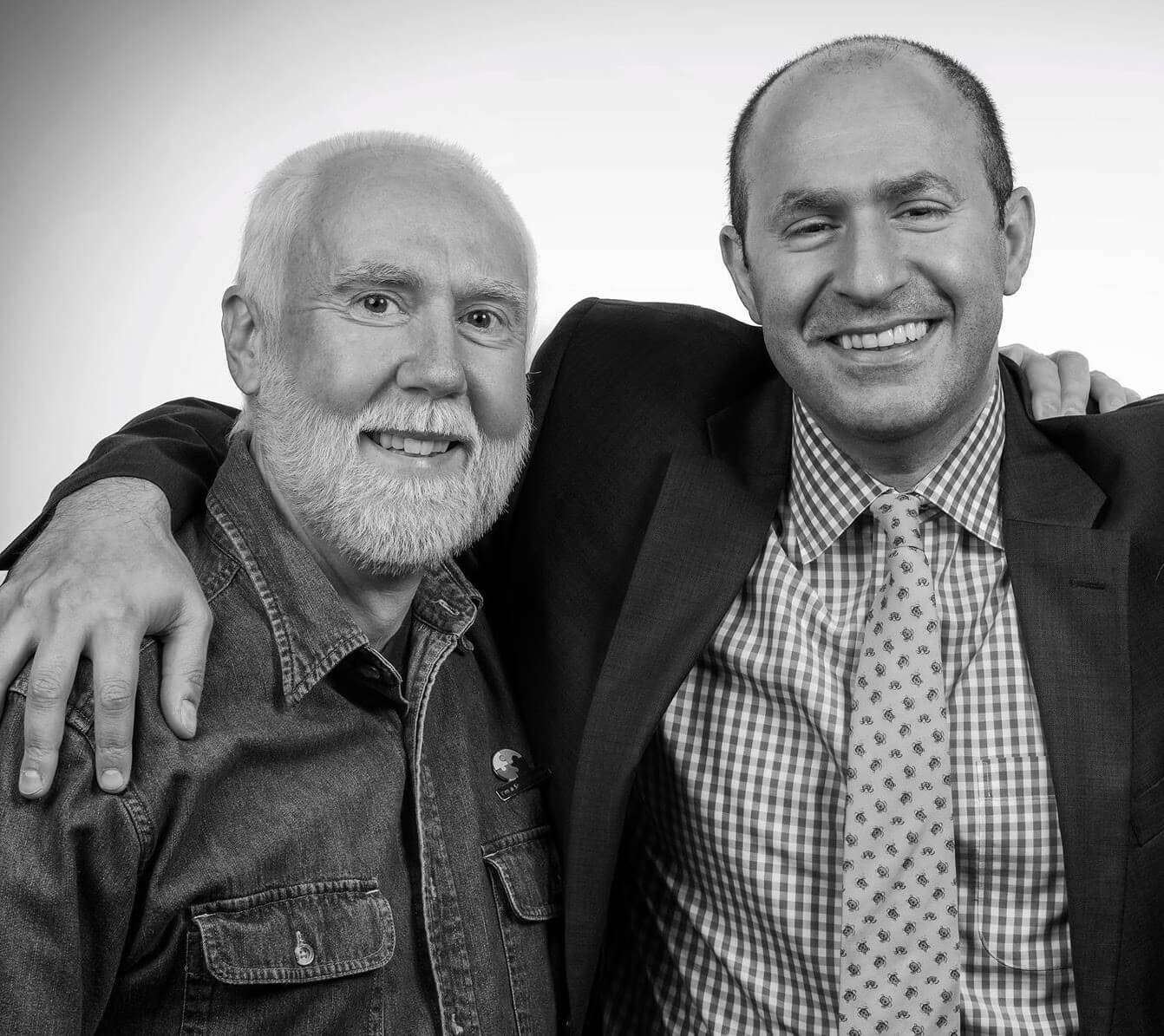 “Today, kidney cancer patients live much longer with stage IV disease, and we are seeing more positive outcomes due to new classes of agents, many being developed and led by Dana-Farber scientists."

Tierney is retired from his job at General Electric, in part due to the challenging side effects of his treatment, and is now focusing on family and supporting other kidney patients in person and online. He is a patient representative on the governance committee of the Dana-Farber/Harvard Cancer Center Kidney Cancer Program, and hopes to be back on his feet by September to continue with one of his other passions: participating in the Boston Marathon® Jimmy Fund Walk presented by Hyundai.

He has donned his sneakers to support research and care at Dana-Farber each year since his diagnosis, and his entire family (including six grandchildren) have all joined him at least once on the trek. In several years, Tierney has been honored as a Walk Hero – his face adorning the 17.5-mile marker along the Walk’s historic Hopkinton-to-Copley Square course. 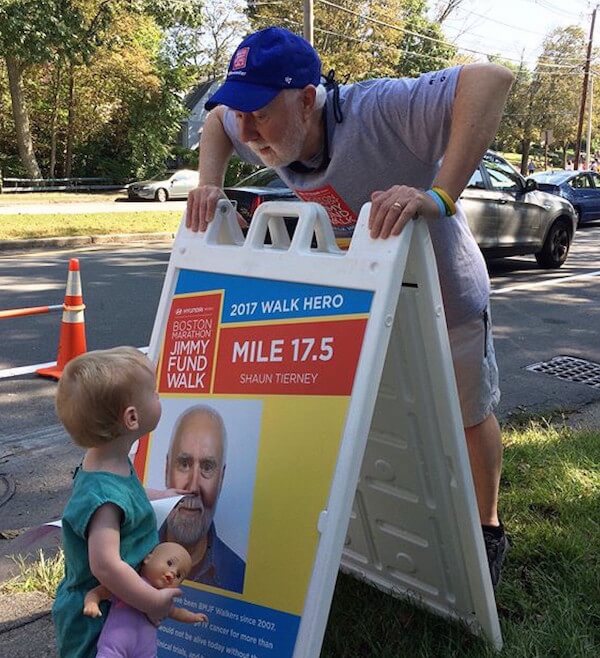 Tierney and his granddaughter.

Like the Walk itself, his has been a long journey, but Tierney is willing to endure the hills he encounters along the way.

“That has been the story of my life at Dana-Farber; I’ve benefitted from one great innovation after another,” says Tierney. “I’m 64 now, golfing, kayaking, chasing after six grandkids, and traveling with Mary, friends, and family. I’m also reaching out to other patients, trying to give the same little ray of hope to them that meant so much to me.”