When a new, state-of-the-art facility for housing Dana-Farber’s research animals was being built in the Longwood Center in 2016, its director, Heather Manning, MBA, LATG, was adamant about one feature: there should be an entire room dedicated to decontaminating all incoming materials to prevent facility contamination.

Most research institutions use small, hand-held devices for decontaminating objects coming from the outside, says Manning. But her vision was a 300-square-foot self-contained room “where everything is controlled by pushing a button.”

The decontamination equipment would communicate to building controls automating the sterilization process from start to finish, resulting in a consistent and efficient process which takes place on a daily basis.

Manning had no idea that four years later, the facility would play a vital role in Dana-Farber’s response to the coronavirus pandemic.

Beginning at the end of March, in a matter of weeks, a band of people from across the Institute came together to do whatever was needed to stand up the N95 reuse project. The team showed that the room could be used to sterilize scarce personal protective equipment (PPE), including N95 respirator masks, face shields, and powered air purifier respirators for re-use multiple times.

Real-life operations made possible by the group that informally called themselves “SEAL Team 9” began on April 20, and decontaminated 431 N95 masks and 266 face shields in the first week. 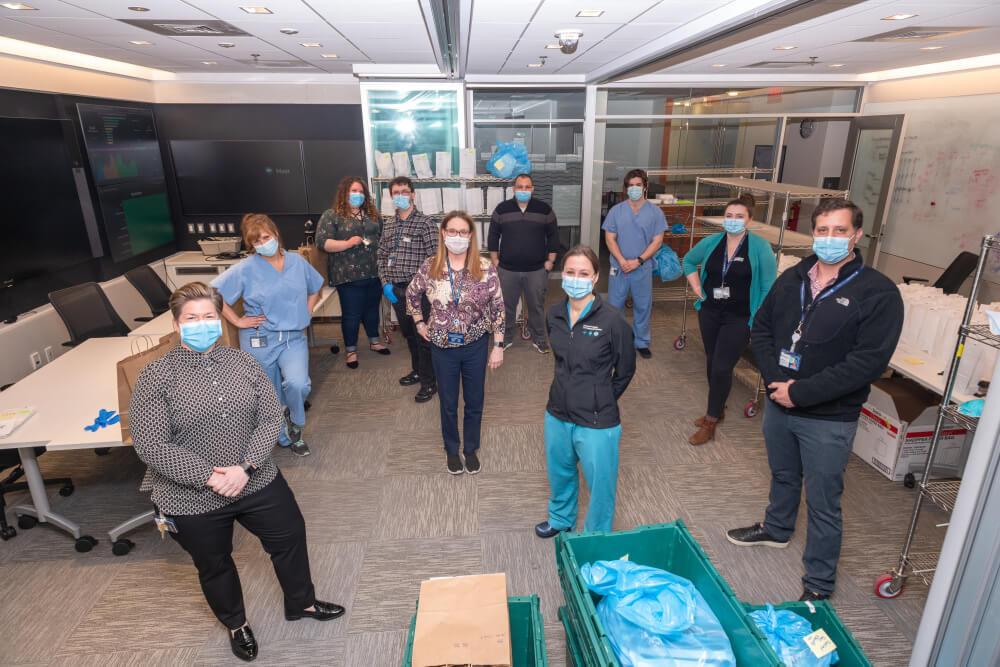 Members of the PPE decontamination operation at the Longwood Center.

Melissa McCullough, senior director of Environmental Health and Safety at Dana-Farber, says it became obvious in March “that we had a supply chain problem” in obtaining enough personal protective equipment, particularly masks, from the normal sources.

Although the masks are intended to be used only once, people began considering if they could be cleaned sufficiently to be used multiple times.

A light bulb went off in the mind of Ross Berbeco, PhD, a physicist in Dana-Farber’s Department of Radiation Oncology, which operates a small animal radiation research laboratory in the Longwood Center.

“I remembered that our animal facility has a dedicated decontamination room using ionized hydrogen peroxide,” Berbeco recalls. “I got in touch with the animal facility folks [including Manning, McCullough, and Barbara Smith, DVM, PhD, senior director of the animal research facility] and that led to talks with the Institute’s biosafety and infection control team, including Karen Byers, RBP, CBSP, and David Kirkorian, who were all very excited about the prospect of using the facility for large-scale decontamination.”

Berbeco, who says his main contribution was “connecting the right people,” got things rolling with a Zoom conference call on March 30 that included many of the team members and Nicole LeBoeuf, MD, MPH of Cutaneous Oncology. LeBoeuf helped establish the Greater Boston Pandemic Fabrication Team (PanFab), a group of volunteer scientists, engineers, clinicians, and concerned citizens working to use innovative approaches to alleviate shortages in medical products related to the COVID-19 outbreak. Berbeco had been working with PanFab researchers to test radiation as a decontamination method (ultimately found to degrade the masks).

With Berbeco’s introduction, LeBoeuf brought the researchers and engineers of PanFab together with the ARF team to rapidly design and carry out the studies necessary to validate the safe use of ionized hydrogen peroxide for rapid decontamination of N95 masks. 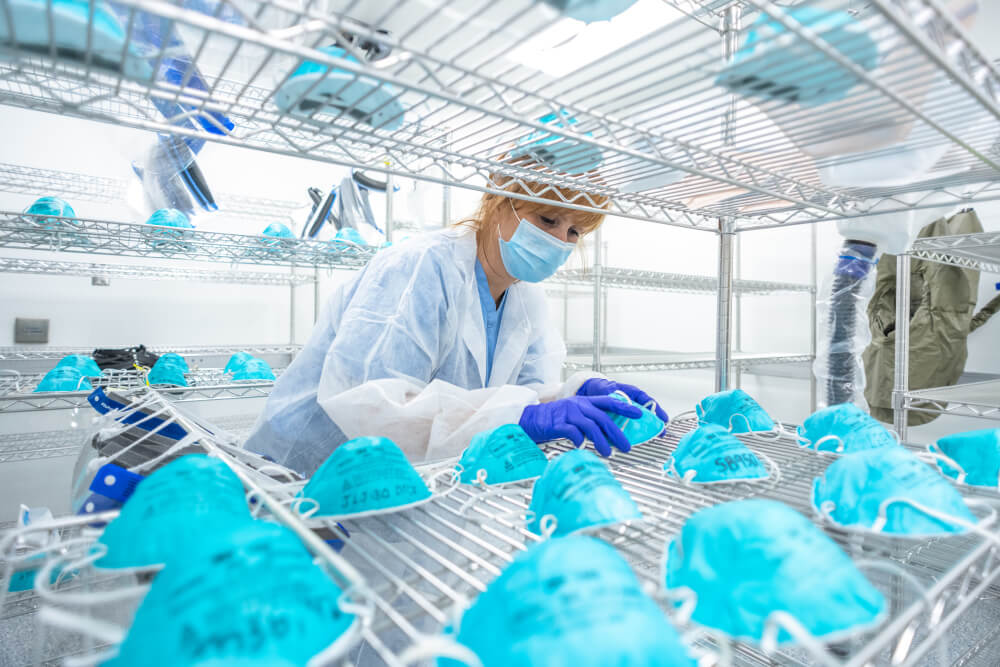 N95 face masks, face shields and other PPE getting ready to be decontaminated.

The critical question was whether masks and other equipment could be adequately decontaminated in the facility while still retaining their ability to filter out microorganisms including the COVID-19 virus. And if so, how many times could they be recycled?

That meant testing the process on series of masks and sending them to an outside certification laboratory and PanFab researchers at MIT to be checked.

The results of the tests showed that the masks and shields could be disinfected and reused at least five times. It’s a huge benefit for Dana-Farber, given the shortage of new PPE products, and it is thanks to both the ARF facility members and the team members throughout the institute who make all the logistics work, says Manning.

From those who collect the masks from the clinic floors, transport the bins to Longwood Center, and the processing team that moves the items from dirty to clean and subsequently returned to the users in the clinical areas — it is a total team effort.

Manning says she has been “the person in the middle,” keeping meetings and other activities on track as “everything started moving at 100 mph” and new workflows — with extensive documentation requirements — were needed.

ARF team members David Turner, Mike Terrasi, and Mehgan Patterson were instrumental in getting the decontamination room set up for this process while maintaining daily operations for the animal facility. 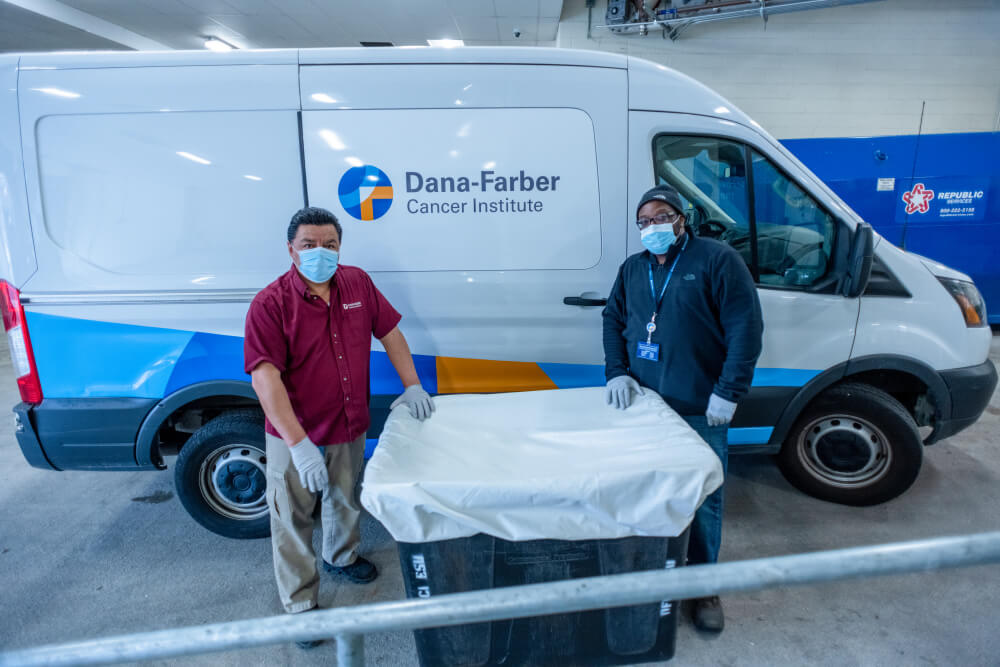 To begin the decontamination process, the ventilation in the room is turned off to allow the hydrogen peroxide solution to pass through a cold plasma arc which then creates an aerosolized fog. This fog contains reactive oxygen species consisting mainly of hydroxyl radicals — the killing agent. After a period of two hours the room and its contents are fully decontaminated, verified by biological and enzymatic indicators. 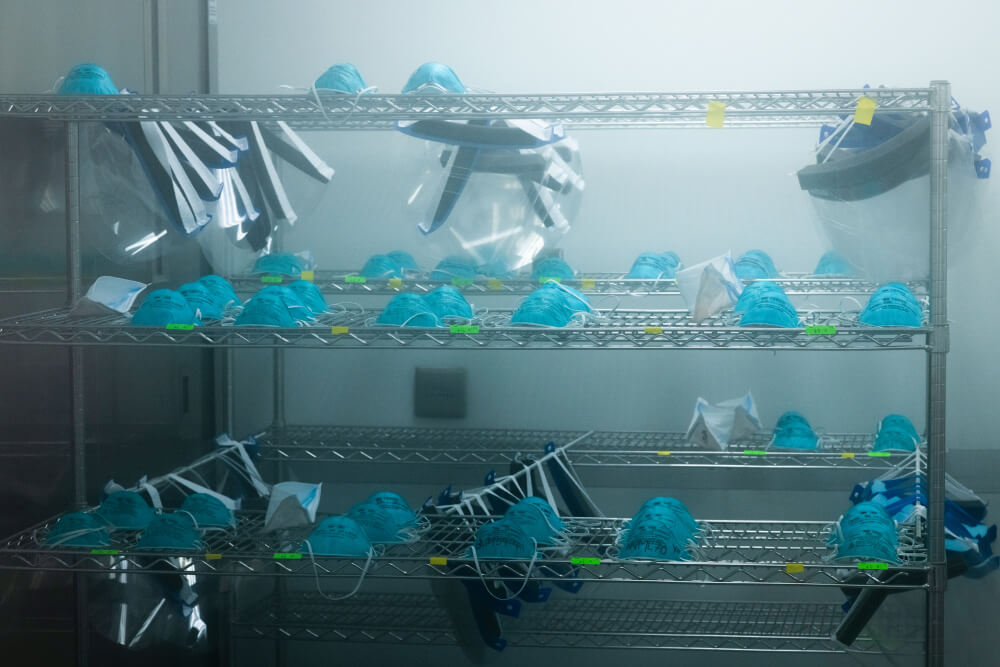 "There are a lot of moving parts to this,” says Manning. “This has been a really important project to everyone involved — mobilizing this with people from across the institute who all have one goal, and it is to help our peers in the clinic as well as patients.”

And there may be a long-term benefit, even when the normal supply chain of new masks and shields resumes, she says.

“It’s given us a look at some of these products that were originally designed for one-time use — maybe they can be used more than once, and that could help the environment.”