Not long ago, it was unclear whether Mark Dowling would survive his lymphoma. Then he became a candidate for a form of immunotherapy that uses specially altered T cells.

In more than two decades as a chaplain with the Springfield (Mass.) Rescue Mission, Mark Dowling estimates that he helped more than 1,000 men struggling with issues like addiction and homelessness face their challenges one day at a time. Now, while battling non-Hodgkin’s lymphoma which at one point spread to his brain, the 67-year-old retiree is applying that same one-day-approach to his own challenge – aided by CAR T-cell therapy that has kept his disease in remission for 10 months and counting.

“That’s been our rhythm for the last three years since my diagnosis, to hang in there and never give up hope,” says Dowling, whose partner on this journey is his wife of 40 years, Holly. “We are grateful to all the people who made it happen, and to the Lord for the timing. It couldn’t be better.”

This assessment is confirmed by Dowling’s physicians in the Hematologic Oncology Treatment Center and Center for Neuro-Oncology at Dana-Farber, where his current treatment consists of mostly check-ups and scans. Not long ago, it was unclear whether he would survive the lymphoma.

Dowling was still working at the rescue mission, a residential Christian rehabilitation center for men, when he began experiencing intense pain in his lower jaw in April 2016. Exams by a dentist and oral surgeon showed nothing wrong, and only after Dowling also began experiencing night sweats, fevers, and a loss of appetite and weight – all symptoms associated with lymphoma – did the severity of his situation become clear.

“My mom died of breast cancer at a very young age, when I was six,” says Dowling, “and some of the residents at the rescue mission had cancer. But I only had a vague, general idea about lymphoma. After the diagnosis, I learned quite a lot.”

Dowling had four months of chemotherapy at a medical center near his home in western Massachusetts, and by Thanksgiving the cancer was gone. He returned to work, but new scans in January showed the lymphoma had returned. The local oncologists now suggested Dowling seek out specialists in Boston, so he and Holly made the long drive to Dana-Farber – where they bonded immediately with Caron Jacobson, MD, medical director of the Immune Effector Cell Therapy Program and a physician in Dana-Farber’s Lymphoma Program.

Even with specialists on board, the setbacks continued. A new chemotherapy regimen initially yielded positive results, but then a second relapse – this time with troubling new circumstances.

“They discovered the same lymphoma had gone to my brain,” says Dowling. “It was a fairly big mass, about the size of a golf ball. There were also spots in my pelvic area.”

A new Dana-Farber specialist now joined Dowling’s care team – Lakshmi Nayak, MD, director of the CNS (Central Nervous System) Lymphoma Center. By this point Dowling had already discussed with Jacobson the possibility of joining a clinical trial involving CAR T-cell therapy, which uses the body’s own immune system to fight cancer. This emerging option is usually open to patients who have relapsed two or more times from other treatments, but now Dowling had become ineligible due to his brain tumor.

All in good time

Here, however, is where timing started to work in Dowling’s favor.
The other treatment possibility was an autologous (self) stem cell transplant. Nayak and Jacobson did not feel Dowling could handle the arduous procedure unless all his cancer – including that in his brain – could be put into remission in advance. Chemotherapy had already failed twice; the third time would have to be the charm.

“By some miracle,” says Jacobson, “he ended up having a complete response to chemotherapy in the brain and the body, so he went on to have an autologous transplant.”

Both Dowling and his wife retired – Holly was a nurse – in anticipation of the lengthy hospital stay and long months of isolation from friends and family required by the arduous procedure. They also moved temporarily to Boston, where Holly could stay with one of their daughters who lived close to Dana-Farber/Brigham and Women’s Cancer Center, where the transplant took place.

Time was once again on their side. While Dowling relapsed yet again eight months after his transplant, his brain tumor had gone away. Science was now ready for him.

“By this point, CAR T-cells had since become FDA-approved for lymphoma, so we were able to treat him under our eligibility criteria,” says Jacobson. “The extension of life Mark got from the transplant meant that he could see CAR T-cells go from experimental therapy to standard of care for his disease.”

Dowling completed his CAR T-cell therapy in November 2018. Nearly a year later, his lymphoma is in remission, and he maintains a deep admiration for the medical advances involved with his treatment, citing both the scientists and clinicians at Dana-Farber as “fantastic, almost like family.” This past April he and Holly celebrated the wedding of their daughter Becky, a milestone Dowling was unsure he would ever reach. But he got there, one day at a time.

“Mark is a remarkable example of how quick the pace of medicine is these days,” says Jacobson. “More time can mean the difference in someone being eligible for the next big thing.” 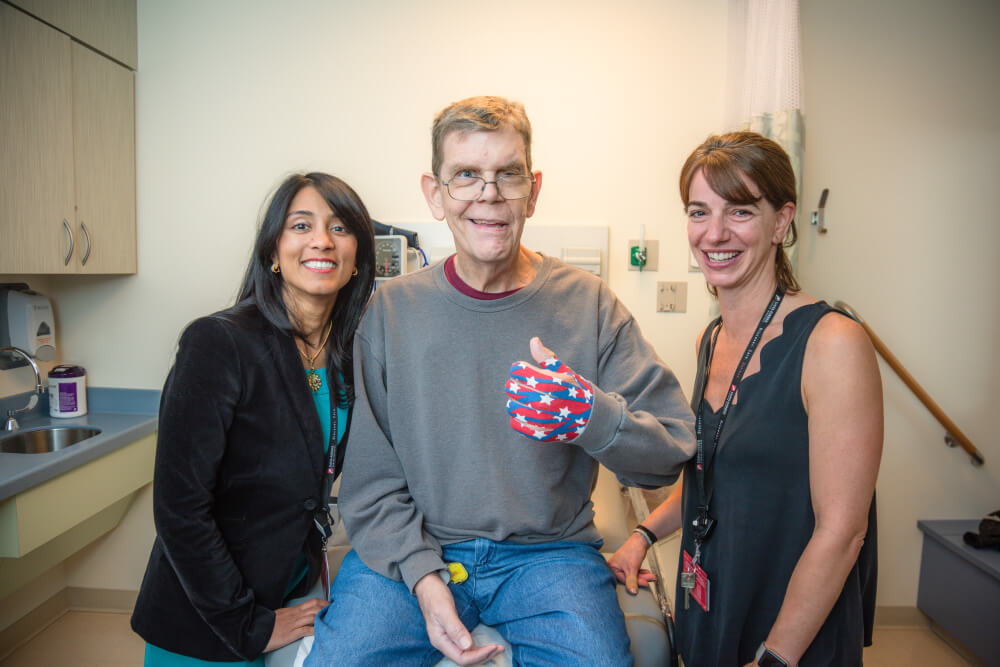