When Angelina Jolie underwent a preventative double mastectomy earlier this year, this issue of cancer risk and genetics made front-page headlines. Jolie, who announced the operation in a New York Times op-ed, tested positive for the BRCA1 gene mutation and learned she had an 87 percent risk of developing breast cancer.

Jolie’s announcement left many women wanting to know more: What is a gene mutation? Should I undergo genetic testing? What should I do if my tests are positive?

I can’t pinpoint when I started to get ovarian cancer symptoms. It was all very subtle and gradual. I was a healthy person. I ran, biked swam, hiked, and went to the gym regularly.

A slight pain in my left side, difficulty digesting food, feeling of fullness, and shortness of breath: those were the subtle constellation of symptoms that landed me in my primary care doctor’s office. At the age of 50, I felt like I was going downhill fast.

A diagnosis of ovarian cancer can raise a lot of questions. It can also raise many new medical terms, which your doctor or a member of your care team can explain. Here are a few terms to know.

Millions of women in the United States have sought treatment for fertility-related problems over the past 35 years. Because many of these treatments –including fertility drugs and in vitro fertilization (IVF) – use hormones to stimulate ovulation, researchers have explored whether such therapies might increase the risk of breast or ovarian cancer.


In one whirlwind year, Allison Bellevue moved to Boston, started a new job, met her future husband, and discovered she was pregnant. Compared to what followed, that year was a breeze.

When Bellevue, now 31, went for her first fetal ultrasound, doctors noticed a small mass on her right ovary. They told her it was likely a cyst, and they would keep an eye on it over time.

In 2012, it is estimated that more than 22,000 new cases of ovarian cancer will be found, and over 15,000 women will die from the disease, according to the National Cancer Institute. Unfortunately, in many cases the cancer isn’t detected until it is advanced. It’s important to recognize the symptoms and urge the women in your life to take early action.

September is Ovarian Cancer Awareness Month and in recognition of that, we asked ovarian cancer survivor Margaret Winchester to share her story.

After being diagnosed with advanced (stage IIIC) ovarian cancer in 2008, I chose Dana-Farber for my care because I knew about the Institute’s cutting-edge approach to cancer care and research. 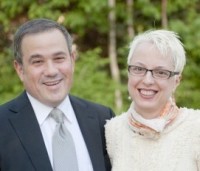 For most people, getting involved with a cause means thinking about what type of organization they’d like to support. But this is a story about what happens when a cause selects you – taps you on the shoulder and asks you to engage in battle.

It began in 1998 when my wife Amy, then 40, was diagnosed with late-stage ovarian cancer. Our two daughters were 5 years and 15 months old. Amy battled for 15 months, and died in 1999. Like many spouses of women who die of cancer too young, my next few years were all about balancing the family boat.

Fast forward to three years later, when I met my current wife, Ruth. We married in 2005 and Ruth adopted my daughters.

Just one year later, Ruth’s mother, Mildred Moorman, was diagnosed with late-stage ovarian cancer and was treated at Dana-Farber by Dr. Ursula Matulonis. (She died earlier this year.) I had the opportunity to share our family’s story at a meeting of the Susan F. Smith Center for Women’s Cancers Executive Council at Dana-Farber.

Always a strong supporter of cancer research, I wanted to do more; to find people like me.