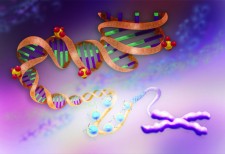 Chinese scientists recently found a gene that encourages the growth of a form of lung cancer by switching on a circuit that includes a gene called sonic hedgehog. How do genes get their names?

When a scientist discovers a new human gene, he or she submits a proposed name to the Human Gene Nomenclature Committee (HGNC), an international panel of researchers with exclusive authority over this area. Guidelines were established in 1979 by the HGNC and have been updated periodically. (The HGNC itself operates under the auspices of the Human Genome Organization, an international association of scientists involved in human genetics.)

Although the rules are fairly lengthy, they basically require that names be concise and convey the character or function of the gene without trying to describe everything known about it. Despite the call for brevity, some names are rather unwieldy – ATP-binding cassette, sub-family A (ABC1), member 1 is an example. As a result, many genes are better known by their acronym or symbol: the symbol for the above-mentioned gene is ABCA1. Symbols are not permitted to be offensive, confusing, or spell actual words.

Even with these rules, gene nomenclature can be confusing. Sometimes, the names bestowed by the HGNC have little meaning for researchers in the field, who continue to use genes’ more familiar names. The gene officially dubbed Smarcb1, for example, also goes by the symbols Snf5, INI1, and Baf47. Even TP53, one of the most “famous” genes for its role as a tumor-suppressor, is best known by its nickname, P53.

However, the rules governing the names of genes for other (non-human) organisms are somewhat looser, allowing scientists to indulge their sense of whimsy. Fruit flies, for example, have the genes tinman and tribbles, while zebrafish boast the genes backstroke, einstein, and tiggywinkle hedgehog.