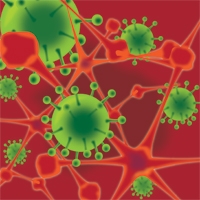 In 1958, when scientists linked an aggressive form of leukemia to infection with a particular virus, some researchers took the discovery as evidence that nearly all cancers are caused by viruses. A cover story in Life magazine in 1962 proclaimed, “Cancer may be infectious.”

Today, it is estimated that viruses are responsible for almost 20 percent of cancer cases worldwide. Seven viruses have been connected to specific types of malignancies; it’s now known, for example, that the human papillomavirus (HPV) causes cervical cancer and some types of head and neck cancer.

While viruses can cause cancer in a variety of ways, the actual mechanisms fall into two broad categories. In the direct method, oncoviruses (cancer-causing viruses) infect normal cells and slip some of their genes into the cells’ DNA, causing the cells to produce a few abnormal proteins. If the cells acquire additional gene mutations, or if the individual has a weakened immune system, the cells can begin to behave cancerously.

In the other, indirect, method, viral infection can cause tissue to become inflamed as the immune system tries to quell the infection. Such inflammation, persisting for years or even decades, increases the chances that tissue will become cancerous.

If there is a “bright side” to such cancers, it’s that they can sometimes be prevented by vaccines, such as the recently developed Provenge, or other treatments that target the causative virus. The HPV vaccine, for example, offers protection against viruses responsible for 70 percent of cervical cancers. A hepatitis B vaccine is used to prevent liver cancer.

Research around new vaccines continues – Dana-Farber’s Cancer Vaccine Center is pioneering new technologies and approaches that will help create more effective cancer vaccines in the future. Vaccines may not be right for everyone. It is important to discuss options – and potential side effects – with your physician.