There are a lot of good reasons not to gain too much weight, but you might not be aware of this one: Growing evidence links obesity to a higher risk of developing cancer, and being overweight may worsen a cancer patient’s outlook.

Although more and more studies are finding this connection, scientists haven’t uncovered the biological mechanisms by which excess pounds make normal cells more likely to turn cancerous. But they are pursuing a large number of leads, some of which may uncover new ways of fighting cancer – including losing weight.

Bruce Spiegelman, PhD, a Dana-Farber cancer biologist, has made many landmark discoveries about molecules involved in metabolic problems like obesity and diabetes, and more recently, how those molecules can be culprits in cancer. He and two colleagues summed up what’s currently known about obesity and cancer in an article in the journal Nature Reviews/Cancer. 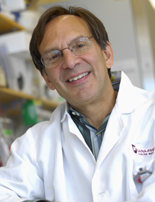 “There are many theories that could explain why obesity raises a person’s risk of cancer,” says Spiegelman. “We know fat cells don’t just store excess calories; they also secrete a number of chemical signals into the blood. These chemicals, known as adipokines, trigger some of the changes that lead to metabolic problems, like insulin resistance and diabetes, and abnormal functions such as high blood pressure, lowering of ‘good’ cholesterol, and cardiovascular disease.”

Some of the chemical signals that may be most directly related to cancer, says Spiegelman, are those that trigger inflammation in fat cells and various organs. Inflammation is part of the body’s defenses against harmful invaders, but in this situation, obesity causes chronic inflammation that affects many tissues in a harmful way.

Scientists also suspect that other hormonal changes related to obesity could contribute to cancer risk. Obese people often produce increased amounts of insulin and insulin-like growth factors, which have been implicated in cancer development.

Scientists can’t yet say which of these leads are most important: In fact, it’s likely that these different pathways converge to turn normal cells to the dark side.

So can losing weight help reduce an obese person’s higher risk of cancer? That’s not yet clear. Some studies have shown that people undergoing weight-loss surgery have a lower cancer risk, but other studies haven’t found this effect. In general, though, doctors advise people to maintain a healthy weight to prevent an variety of problems.

Drug treatments may have benefits as well. Some diabetes drugs appear to reduce cancer risk, and heavier patients have been found to benefit more from “chemo-prevention” – taking anti-inflammatory drugs like aspirin to prevent colon cancer.

Spiegelman and his colleagues make one important point: With the increase in childhood obesity, an emphasis on making lifestyle changes could help not only prevent obesity in adulthood but also lower the risk of cancer over a person’s lifetime.

Fuchs says he is currently investigating the mechanisms responsible for the connection between obesity and cancer: “We believe the research will not only allow us better ways to prevent cancer but also gives us new critical insights on finding new therapies for patients with established cancer.”

And research is bringing new developments daily: Together with other scientists, Spiegelman recently identified a natural hormone from muscle cells that triggers some of the key health benefits of exercise. The research team believes the protein may lead to new treatments for diabetes, obesity and perhaps other disorders, including cancer.