Their season starts today, and although the Boston Red Sox will have a lot of competition in their quest to repeat as World Series champions, fans can be certain of one thing: a continuation of the baseball team’s special bond with the Jimmy Fund and Dana-Farber Cancer Institute.

Dating from 1953, this is the longest and most successful partnership between a professional sports team and charity in North America. The Red Sox have helped the Jimmy Fund raise millions of dollars for cancer care and research at Dana-Farber through appearances and appeals while befriending patients of all ages.

Here are some highlights from the long-standing connection between these two New England institutions. 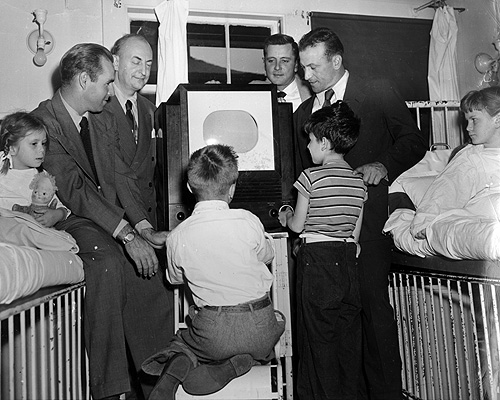 Baseball was instrumental in the founding of the Jimmy Fund. A broadcast of a May 1948 visit by Boston Braves players to the hospital bedside of a 12-year-old cancer patient of Sidney Farber, MD, known to the public only as “Jimmy,” was heard by a nationwide radio audience, with listeners encouraged to send in donations to get the boy a television. By summer’s end more than $230,000 had been raised, which Farber used to start construction of a research and treatment facility (now Dana-Farber Cancer Institute) to fight pediatric cancer – then almost universally fatal. 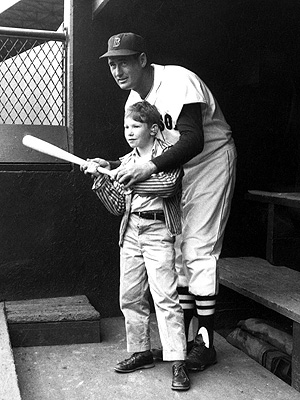 When the Boston Braves moved to Milwaukee in 1953, team owner Lou Perini passed off stewardship of the Jimmy Fund to his Red Sox counterpart, Tom Yawkey. Legendary Sox slugger Ted Williams became the charity’s greatest champion, routinely visiting young patients without media fanfare and appealing for the cause throughout New England. 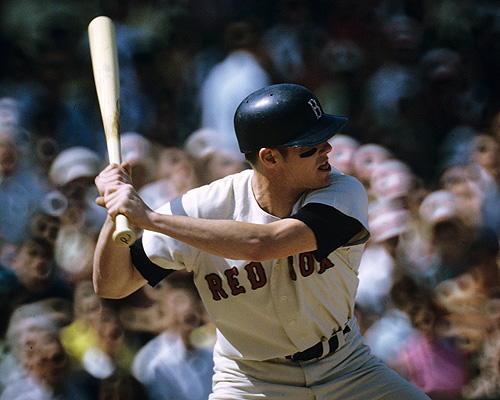 After Ted Williams retired, new Red Sox players stepped forward as Jimmy Fund advocates. When the 1967 “Impossible Dream” Sox went from ninth place to first in one season, they voted unanimously to contribute a full share of their World Series bonus to the Jimmy Fund in honor of Tom Yawkey. One player from that team, rookie second baseman Mike Andrews, served as Jimmy Fund chairman for 30 years after his baseball career. 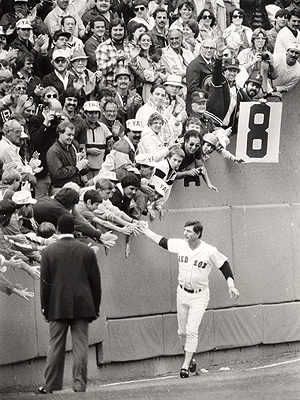 Carl Yastrzemski, like his left-field predecessor Ted Williams, was a Jimmy Fund champion. In his final game for the Red Sox in 1983, “Yaz” changed his uniform jersey each inning, and then donated all the shirts to Dana-Farber to auction off for the Jimmy Fund. By this time, many pediatric cancer patients were living into adulthood thanks to advances in research and treatment, aided in large part by the support and exposure generated by the Red Sox. 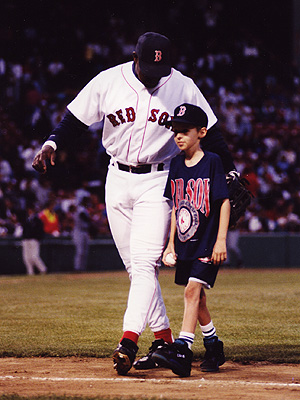 Many Red Sox players have developed close relationships with Dana-Farber patients, including slugging first baseman Mo Vaughn. Vaughn promised Jason Leader he would hit a home run for the boy on his 11th birthday, and after Mo came through, the two forged a friendship. Today their bond is honored by their respective families – who team up for the Boston Marathon Jimmy Fund Walk®, presented by Hyundai. 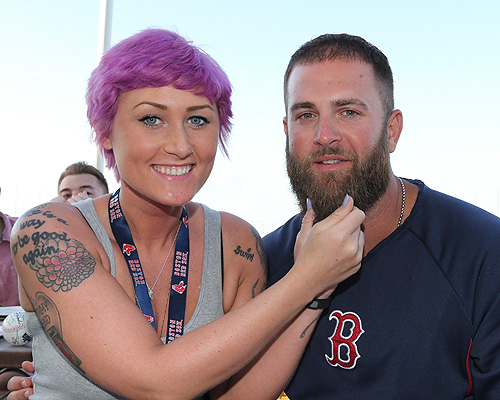 Photo courtesy of the Boston Red Sox
In recent years the link between Dana-Farber and the Red Sox has expanded through annual events like the WEEI-NESN Jimmy Fund Radio-Telethon at Fenway Park, Rally Against Cancer, ™ and by Red Sox players (currently third baseman Will Middlebrooks and catcher David Ross) serving as Jimmy Fund Co-Captains. There are also trips by teenage patients to Red Sox spring training in Florida and regular-season road games, get-togethers that give kids the chance to bond with peers who understand their situation and create incredible memories. 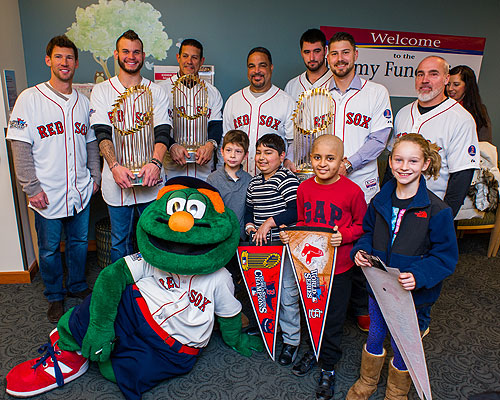 Like Ted Williams 60 years ago, today’s Red Sox players and coaches make the short trip down Brookline Avenue from Fenway Park to visit adult and pediatric cancer patients at Dana-Farber. When a December, 2013 visit included a special treat – the chance to see the 2004, 2007, and 2013 World Series trophies up close – many patients and families got both a great thrill and the perfect photo for their upcoming holiday cards.

1 thought on “Play Ball: The Red Sox and Jimmy Fund Start Another Season Together”