From her early days growing up in Hungary, Yvette Kaplan has possessed a strong will to survive. Whether it was German occupation during World War II, communism and a daring break for freedom as a teen, or cancer’s devastating impact on her family, she has met each challenge with resilience – including a pancreatic cancer diagnosis. Here is her story.

I remember watching the Nazis march into my hometown of Budapest in the spring of 1944, when I was only five. My father – like almost all the Jewish men – had been taken away two years before. I kept waiting for him to come home, but never found out what happened to him.

When the war ended, Communist rule began. In 1956, after I had graduated high school and was working as a chemist, a student protest turned into a revolution. This was my opportunity to escape.

My sister Julie, a friend, and I walked for three days and nights until we got to Austria, and then hitchhiked to Vienna. An uncle in New York sponsored me, and the U.S. government arranged for transportation to America for thousands of Hungarian refugees – including the three of us and my mother. I was also fortunate enough to receive a full university scholarship.

After college, I became a social worker in New York City and met my husband, Bernie, a physicist. We soon moved to Massachusetts and had a son, Saul. Around Saul’s third birthday, Bernie developed jaundice. Surgery revealed cancer in his pancreas and liver, but the doctors never told him – they just told me. That’s how it was back then; they thought protecting the patient was the best approach, and I had to carry that burden alone. It wasn’t the type of thing you talked about with friends or even family. Right up until Bernie died in January 1970, at 33, he and I never discussed cancer.

By the time I was diagnosed with breast cancer in 1994, thankfully, things had changed and people were more open. My treatment went well and I was cancer-free for more than 20 years, working as a tour director leading groups all around the world. Every couple of years, my sister and I would go back to Budapest and revisit the places of our childhood, and in 2016, Saul came with me for the first time. It was wonderful sharing that experience with him, but I didn’t have my usual energy to run around the city. It turns out I was now the one with pancreatic cancer, which was spreading to my liver, just like Bernie.

I spent 13 months on a clinical trial, a partnership between Dana-Farber and Beth Israel Deaconess Medical Center, but I had to discontinue due to complications. The long drives from my my home on the South Shore of Massachusetts up to Boston were tough, and since starting treatment again I’ve been able go to Dana-Farber/Brigham and Women’s Cancer Center (DF/BWCC) in clinical affiliation with South Shore Hospital. It’s comfortable and calm, and everybody from my oncologist Melissa Kim Yee, MD, to the nurses and the receptionists are wonderful. I can get my bloodwork, see Dr. Yee, have reiki and massage, and consult a nutritionist – all in the same building. Saul lives out of state, but he comes in at least once a month and takes me to treatment. Sometimes we talk to a social worker together, which is also very helpful. 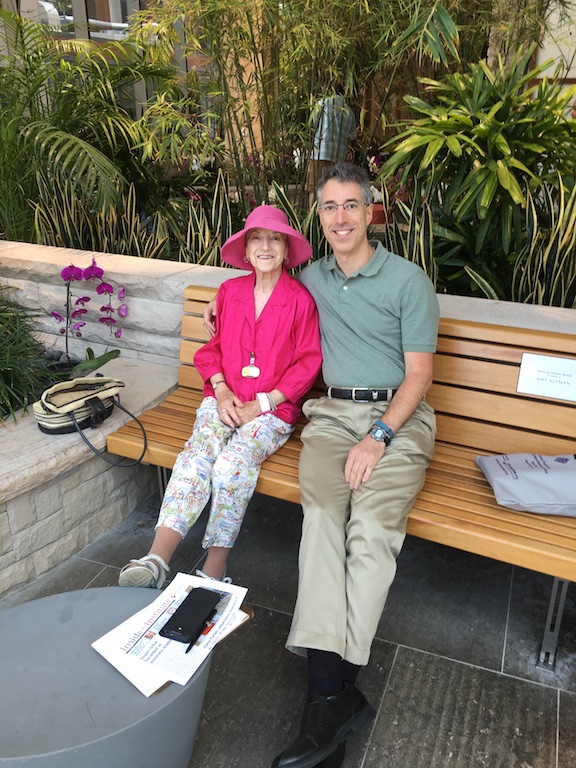 My diagnosis is serious, but I know I’m getting the best care. Dr. Yee is in regular touch with Dana-Farber colleagues in Boston, and I hope that a new clinical trial will be found for me.

Where do I get my strength and desire to continue? I’m not sure. But I’ve never been a quitter.