Sometimes the best things are worth waiting for. Charles “Chuck” Vanada and Tobias Gillmann, connected across 3,700 miles and one life-altering procedure, can attest to that.

In September 2009, Vanada – then a 48-year-old non-Hodgkin lymphoma patient – received a stem cell transplant at Dana-Farber/Brigham and Women’s Cancer Center (DF/BWCC), thanks to Gillmann, 34, who six years before had added his name to a marrow donor database in his native Germany with links to the international donor registry. Donor and recipient learned each other’s identities after a two-year waiting period set by their countries, but it was not until last month that they finally met at Boston’s Logan International Airport.

“Thank you so much; I’m so grateful,” Vanada said, grabbing Gillmann in a tearful embrace. “Five years is a long time,” Gillmann replied, referencing the period they had communicated by Facebook before meeting in person. During Gillmann’s five-day visit, which included sightseeing and a party thrown by Vanada’s family, the pair continued building on a special friendship cemented by common interests as well as shared cells.

Both, for instance, are automotive enthusiasts: Vanada repairs and races stock cars with his son, Jacob, while Gillmann is a mechanical engineer who works for Mercedes Benz. Both are also family men: Chuck and his wife, Debbie, have been married 32 years and have two sons (Jacob and Josh) and a grandson; Gillmann is married with an 8-year-old daughter, Lucy.

In fact, it’s a photo of Gillmann holding Lucy, then 3, that was the first image the Vanadas had of their donor. “I remember looking at it and thinking, ‘This is the man who saved my life, holding his little girl,’” says Vanada.

The strong bond formed by the men is the result of a selfless act Gillmann undertook in 2003. A colleague in Germany had blood cancer, so a campaign was held to sign up potential stem cell donors. Six years later, Gillmann learned he had a patient match, so he went through the collection process, which he describes as “quick and easy.” (Only later would he learn his match was in the United States.)

That night, the cells were flown to Boston, where Vanada – whose cancer was spreading after 10 years of semi-remission – was waiting. The healthy cells from Gillmann were infused into Vanada’s bloodstream, where over the next several weeks they formed healthy red and white blood cells. 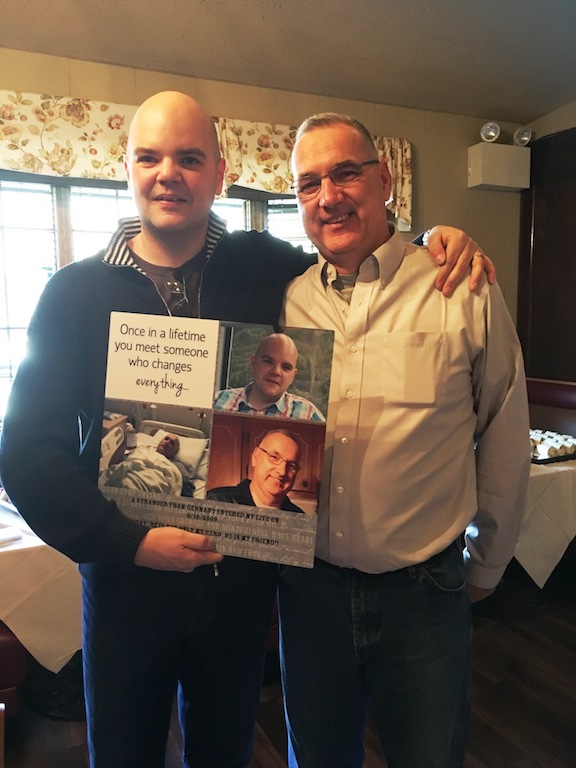 “Every day we depend on people like Mr. Gillmann to come forward with such kindness and generosity,” says Joseph Antin, MD, chief and program director of adult stem cell transplantation at DF/BWCC and Vanada’s oncologist. “The curative potential of unrelated donor stem cell transplantation can only be realized when people take the time to join the registry and provide this fantastic resource.”

Now that they have connected in person, Gillmann and Vanada plan to continue being part of each other’s lives. In April, when Tobias’ daughter receives her first Communion, Chuck and Debbie will be making their first trip to Germany to celebrate.

After all, what are brothers for?

Get more information on the National Marrow Donor Program’s “Be The Match” registry.