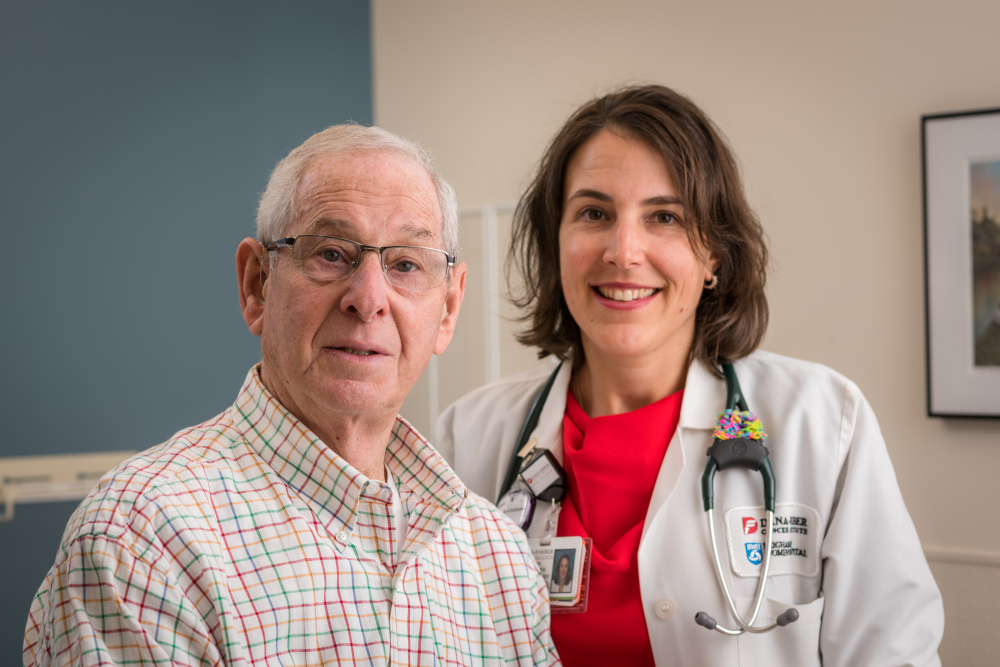 For nearly 50 years, Jay Schwab wondered whether the melanoma he survived as a young man would return in a more serious form. When it did, in 2016, Dana-Farber was ready with a revolutionary response.

A retired pediatric dentist, Schwab is one of a growing number of Dana-Farber patients thriving in treatment due to breakthroughs in immunotherapy. The field centers on harnessing the power of one’s own immune system to fight cancer, and in Schwab’s case, it is shrinking his tumors and improving his quality of life. His three younger siblings all died of cancer, but at 76, he is feeling great and optimistic for the future.

“Dana-Farber and immunotherapy are giving me another chance,” says Schwab. “I have a loving family – a wife, two children, and four grandchildren. I have done a lot of good things in my life, but I’m not ready to give it up.”

Immunotherapy capitalizes on our immune system’s natural function of recognizing foreign cells and attacking them, and takes it a step further. Cancer cells often find a way to bypass the vigilant immune system, including through the use of natural proteins called immune “checkpoints” that act as brakes to prevent an immune system attack. Led in part by researchers at Dana-Farber, scientists have learned how the cancerous cells work their deception.

Partnering with colleagues around the world, they are developing checkpoint inhibitors – drugs that take off the brakes and let the immune system do its job. Some tumors that once proved stubbornly resistant to chemotherapy and other treatments are being thwarted quickly and dramatically, offering patients like Schwab their best chances yet of beating even the most challenging cancers like melanoma and lung cancer.

“We are seeing miraculously rising survival rates,” says Elizabeth Buchbinder, MD, Schwab’s primary oncologist at Dana-Farber. “Before checkpoint inhibitors, melanoma was unfortunately a very aggressive cancer that did not respond well to any treatment. Now many patients are years out from their checkpoint inhibitor treatment, and doing great. In many of them, their disease is shrinking.”

The first time he had cancer, Schwab says, it was luck and not science that saved him. A Brooklyn, New York, native who moved to Boston to attend Tufts University School of Dental Medicine, he was undergoing his pediatric training at Boston University in 1968 when he developed melanoma on his back. Survival rates for the disease were much lower then, but because his was thought to be localized, it was removed surgically – sparing him chemotherapy and radiation.

A year later, Schwab opened his pediatric practice in Providence, Rhode Island, which he led for nearly 35 years. He and his wife, Karen, raised a son and daughter on Boston’s South Shore. He became active in community affairs, played a lot of tennis, and enjoyed gardening. It was a full and satisfying life, but cancer was never far from Schwab’s mind. After a long day at work, he would pull out his old pathology reports, think of his wife and kids at home, and remind himself that things could be much worse.

This seemed the case when Schwab felt pain in his abdomen in August 2016 that led to his second melanoma diagnosis. A CT scan discovered the disease had spread to his hip, bones, lung, and lymph nodes. Chemotherapy is not very effective in melanoma, and radiation could only be used sparingly because of the threat of damage to his organs. The pain was so bad that Schwab needed a cane to walk.

“Before immunotherapy, this was a dismal diagnosis,” says Buchbinder. “Now, with it, he’s doing absolutely wonderful. His immune system has kicked in and is attacking his cancer. Our hope is that the shrinking that we see on our scans will be a long-term durable response, and that his melanoma will continue to be controlled and not grow back.”

Schwab has a one-hour immunotherapy infusion every two weeks, when he also meets with Buchbinder or a member of her team. Most of his time, however, is for other pursuits like gardening, rooting for the Red Sox, and spending time with his family and friends. And he no longer needs the cane.

Learn more about how Dana-Farber treats patients with melanoma.