When Rosette Becker developed primary central nervous system (CNS) B-cell lymphoma, its symptoms forced the retired scientist from Sharon, Massachusetts, to give up the painting she so loved. But after starting chemotherapy in a clinical trial at Dana-Farber Cancer Institute, Becker was able to pick up her brush again and paint her way through the ups and downs of her successful treatment.

Becker, 73, started painting as a child in Belgium; it was a passion she shared with her mother. She set the hobby aside throughout her career in medical science management, applying her PhD in biophysics to develop medical diagnostics, serve as a principal in a venture capital firm, and finally establish her own biotech consulting firm. In 2000, when her mother developed macular degeneration, Becker found herself helping her mother with her art.

“The paintings started out hers, but ended up being mine,” Becker says. 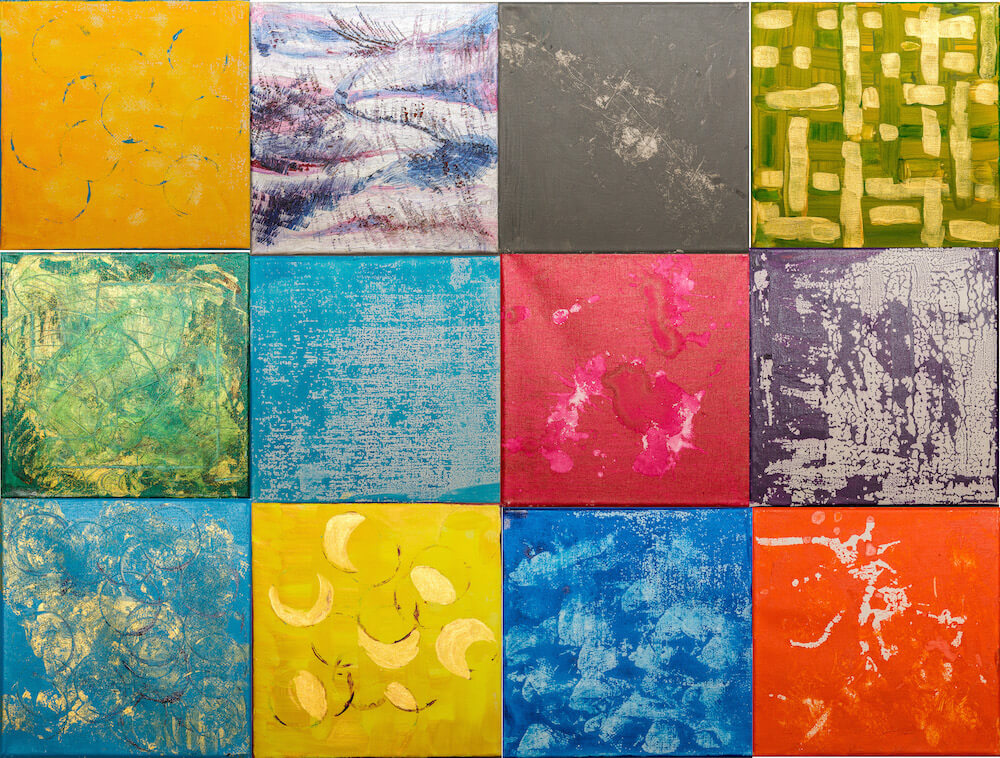 Upon her retirement in 2003, Becker set out to create her own works once again. Her first subjects were highly personal portraits of family members, living and deceased. She painted stories of the hidden children of the Holocaust—Jewish children, including her two older sisters, who had been hidden from the Nazis. Over the next decade, she gravitated toward abstract painting.

“It is much freer but also much more difficult,” she explains. “In my role as a scientist, I was very logical and analytical. But with abstract art, you have to use your emotions, and you don’t know what will come out on the canvas.” 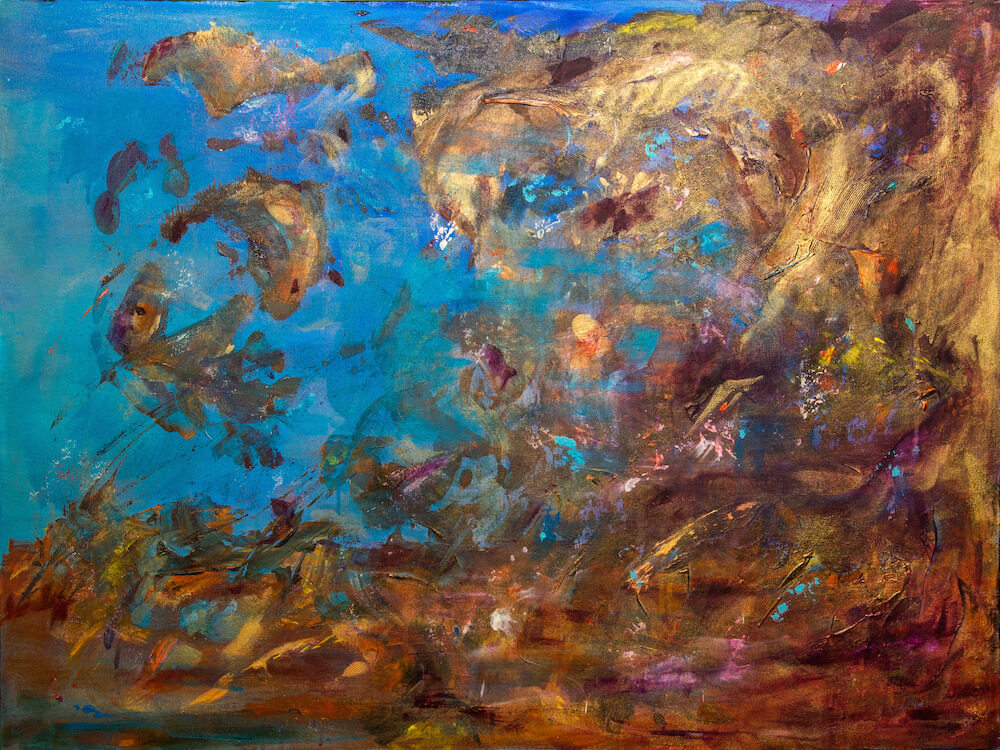 In July 2013, Becker suddenly lost fine motor coordination in her right hand—her painting hand. “I was writing a birthday card for my granddaughter and I thought, ‘My handwriting looks weird,’” she recalls. She started struggling for words and unconsciously substituted words. At her granddaughter’s birthday party, she felt unable to connect emotionally with her family members.

When she drove through two red lights, “I knew I needed to get help,” she says.

A Boston neurologist immediately admitted her to a local hospital for testing after a consultation. After nine days, Becker had a diagnosis: a high-grade brain tumor caused by primary central nervous system (CNS) lymphoma, an extremely rare form of cancer. True to their training, the Beckers delved into the scientific literature to understand her condition and reached out to their extensive network in Boston’s medical community for referrals for the right specialist to treat it.

That specialist was Lakshmi Nayak, MD, at Dana-Farber’s Center for Neuro-Oncology.

“Primary CNS lymphoma is a disease in which many patients respond well to the initial line of chemotherapy,” Nayak says. “But the recurrence rate with standard therapy is very high, usually 50 to 60 percent in the first two years. In the trial, a very high dose of induction chemotherapy and immunotherapy was followed by a consolidation regimen to eradicate any microscopic tumor cells that remain, reducing the chance of recurrence.”

The high doses of chemotherapy utilized for the consolidation regimen can temporarily reduce a patient’s bone marrow stem cells, which power the immune system and fight off infection. CNS lymphoma patients sometimes have their stem cells harvested before chemotherapy and injected afterward to kick-start the immune system. At the time of Becker’s consult, Nayak was conducting a clinical trial comparing the recurrence rate in CNS lymphoma patients who received consolidative chemotherapy and a stem cell transplant with those who did not undergo a transplant.

“Within two days, Dr. Nayak completed all the tests I needed to join the trial,” Becker says. “She is so caring; she checked in on me repeatedly throughout the tests. To start my treatment as fast as I did was unbelievable.” 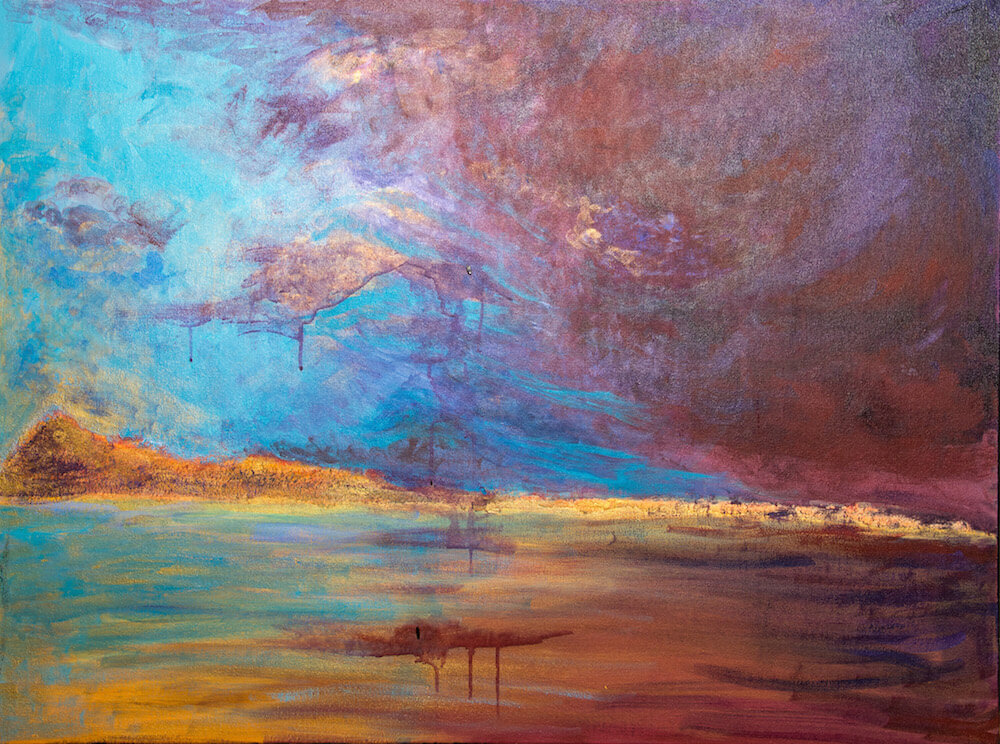 By October, Becker’s neurological symptoms had abated enough for her to lift a brush again. But it was in November, when she was finally able to paint the large-scale canvases she most enjoys, that she felt fully back in her artistic element. One of her first works from this time, titled “String of Hope,” sets a ribbon from a gift she received against a glowing golden background. It reflects the optimism she felt at the time.

But her regimen was about to change. In December, her chemotherapy protocol was switched in the lead up to the next phase. In January 2014, Becker would undergo consolidation without a stem cell transplant. She would be hospitalized for three weeks.

“I appreciated Dr. Nayak’s honesty in telling me that it was going to get worse,” Becker says. “I could brace myself and muster the energy and power to face it.”

Over the next month, Becker channeled her anxieties about these changes into a duo of dark canvases titled “Angst” and “Fear.” Once the paint was on the canvas, her anxiety was transferred to the painting. “Those emotions were no longer inside of me,” she explains. “They were on the canvas. They relieved my emotional storm. I felt ready for treatment and went into the hospital with peace of mind.”

Those three weeks were rough, Becker acknowledges, and she slept most of the time. “But when I would open one eye and see my family, I had a big smile on the inside,” she said. “I knew I was OK.”

In March 2014, Becker was scheduled for her first post-consolidation MRI. When it was postponed, she poured her emotions into her painting once again. The resulting work, titled “One Day at a Time,” shares the same theme—a golden background, ribbon, pieces of Becker’s hospital ID bracelet—as her earlier “String of Hope.” “I was optimistic about my chances for remission, and it was reflected in the painting,” she says. 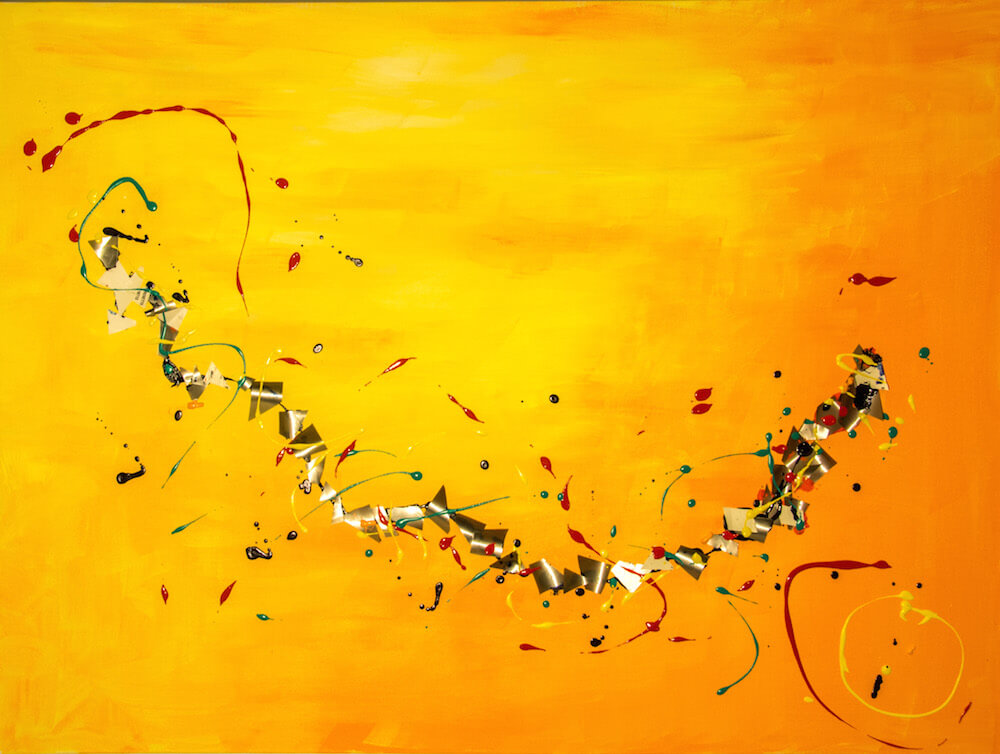 In Becker’s case, art mirrored life. Her CNS lymphoma did go into remission, and it remains so more than four years later. “She has been doing fantastic,” says Nayak, who has since been appointed to lead the Center for Central Nervous System Lymphoma, established recently at Dana-Farber. The first of its kind in the world, the center is dedicated to providing comprehensive care for patients, like Becker, with primary or secondary CNS.

As for Becker, in the years since her consolidation she has not only created new works but shared her story—and her paintings—with others.

“I don’t consider myself a motivational speaker,” she says. “I just tell them what I did. If you have something serious in your life—illness, death, divorce—do something creative. It doesn’t matter what. Doing something creative helps get your emotions outside of yourself. It will help you through your situation.”