The two diagnoses, which came in 2012 and 2014, allowed mother and son – who were already close – to bond even more deeply during their respective treatment at Dana-Farber. And in the years since, even when Anne’s disease progressed to metastatic breast cancer and Kevin dealt with the side effects of his own treatment, they and their close-knit family have remained active and optimistic.

“Never in our wildest dreams could we have expected for this to happen, but we’re so thankful to be there for each other,” says Anne Palmer, 59. “We have the best care in the world and a wonderful, supportive family. Sure, it’s a lousy situation, but there are so many more positives in life to focus on.”

This upbeat attitude was on full display in 2012 when Anne and her husband, Jeff, gathered Kevin and his brothers Eric and Brian together to share news of her first diagnosis. The boys thought their mom – an avid runner – was indestructible. She told them she didn’t plan to let breast cancer stop her from living an active life, and with guidance from her oncologist Meredith Faggen, MD, and other Dana-Farber clinicians, Anne kept her word.

While still undergoing chemotherapy at Dana-Farber/Brigham and Women’s Cancer Center in clinical affiliation with South Shore Hospital, near the family’s Scituate, Mass. home, Anne continued to train for a half-marathon. She decided to fundraise for her race through Dana-Farber’s Run Any Race program. Then, with help from Eric, she returned to her youthful passion of skateboarding – and realized she was still pretty good at it. Soon she was joining with Eric in longboarding competitions around the country, including the annual Miami UltraSkate – in which participants skate for 24 hours straight around a NASCAR race track.

“It was incredibly important for my mom to keep an eye to the future while remaining present to what was happening in her life,” says Eric Palmer. “I think the fact she was so resilient through her cancer was pivotal in how Kevin handled the news of his brain cancer.”

Learn more about how cancer is treated at Dana-Farber Cancer Institute.

Kevin was still living with his parents during Anne’s initial breast cancer treatment; inspired by his ultra-skating mom and brother, he got back into competitive running himself. Along with his dad, he comforted his mom each night through her chemotherapy. So when bouts of dizziness and a seizure at work led to his diagnosis in December 2014 with a malignant and inoperable brain tumor, Anne was by his side through proton radiation and chemotherapy treatment at Dana-Farber and Massachusetts General Hospital. 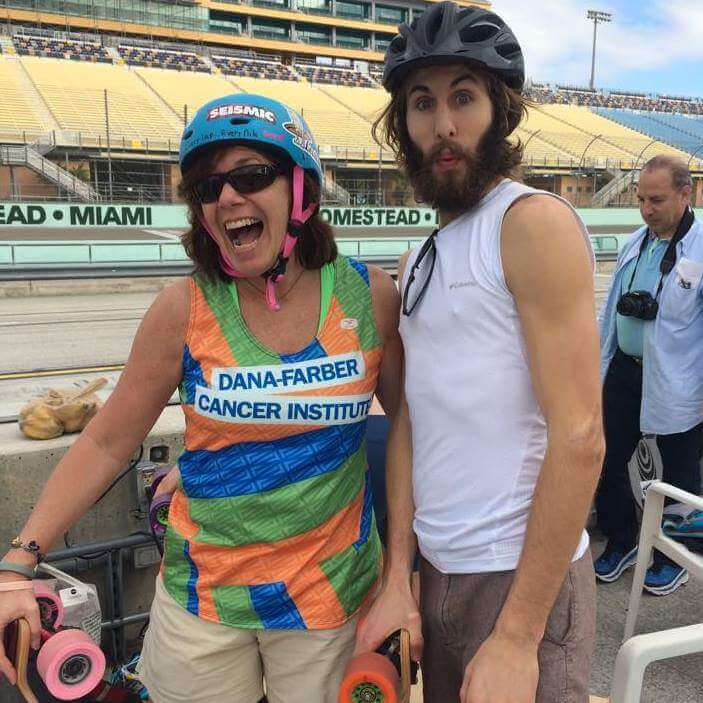 “When I got my diagnosis, my mom told me right off the bat, ‘We have the best doctors in the world. We will get through this,’” says Kevin, whose Dana-Farber care is overseen by Rameen Beroukhim, MD, PhD. “She set such a great example for us through the way she handled her cancer that I wanted to do the same thing, so I kept running and working out as much as I could through my treatment. She’s a champion.”

Today, both Kevin and Anne are doing well; Anne’s cancer has stopped progressing, and Kevin’s tumors, shrunk down by his treatment, have stayed small. Both are in a “watch-and-wait” phase, and this past summer, they ran with Jeff and Eric in the Jimmy Fund 5K & Fun Run presented by Bayer.

“It’s a scary thing to hear that someone you love has cancer, but when they approach their treatment like any other life challenge, it becomes much easier to face,” says third brother Brian. “With all the challenges Kevin faced, he was reminded by our mother what a gift life is – and how it’s best not to spend too much time feeling sorry for yourself.

“But you don’t have to be going through cancer; we are all inspired and gain strength from her example.”