The gaudy green image you see below is not an avant-garde sculpture, but the most detailed image yet made of the protein “spike” that allows HIV – the virus that causes AIDS – to latch onto and enter human blood cells.

Protruding from the virus’ membrane, the spike is considered one of the most tantalizing targets for vaccines designed to prevent infection by HIV. The new three-dimensional image, produced by Dana-Farber investigators, allows researchers to visualize for the first time the individual envelope proteins – gp120 and gp41 – that make up the spike, as well as the smaller components of those proteins. 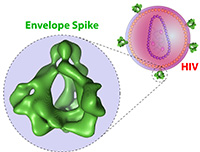 “The fascinating cage-like architecture of the envelope spike contributes to HIV’s ability to avoid an attack from immune system antibodies,” says Dana-Farber’s Joseph Sodroski, MD, who led the work with colleague Youdong Mao, PhD. “Knowing the detailed structure of the spike may assist scientists in developing vaccines that elicit more effective virus-blocking antibodies.”

To create the image, investigators purified tiny amounts of the envelope spike and used cryoelectron microscopy – which magnifies molecules at very low temperatures – to obtain the three dimensional pictures. The results were published in the journal Nature Structural & Molecular Biology.

AIDS has been a focus of research at Dana-Farber since the early 1980s – soon after the disease was first identified – because of the many biological links between AIDS and cancer.