Rumors of a link between deodorant/antiperspirant and breast cancer have been around for nearly 20 years. The theory is that by blocking sweat glands in the armpits (particularly in women who shave their underarms), antiperspirants allow toxic compounds to accumulate in the underarm lymph nodes near the breasts, prompting cancer to develop. 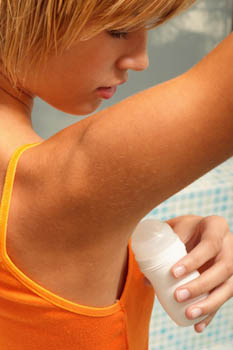 However, research has found no conclusive evidence of a connection between deodorant/antiperspirant use and breast cancer.

A major study in 2002 found no data to support this claim. The study involved more than 1,600 women, about half of whom had breast cancer and an equal number who did not. The researchers found no link between breast cancer risk and the use of antiperspirants or deodorants or underarm shaving.

In summary, there is no substance to the theory that antiperspirants cause harmful substances to build up in the underarm lymph nodes. Lymph nodes do help clear out bacteria and wastes, but they don’t release these substances through sweating – in fact, they aren’t connected to the sweat glands. Cancer-causing substances are removed from the blood by the kidneys and liver and leave the body through urine and feces.

17 thoughts on “Does Deodorant/Antiperspirant Cause Breast Cancer?”