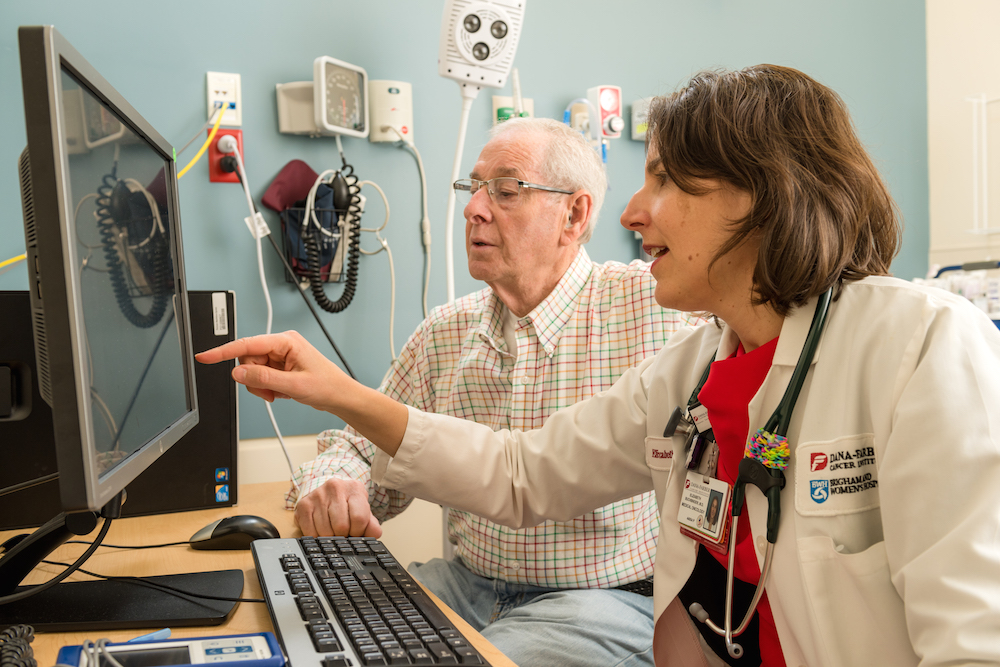 As a pediatric dentist, Jay Schwab had a clear-cut enemy: dental disease in children and adolescents, and the apprehensions they faced in the dental environment. Cavities could neither hide from his drill nor fool his X-ray machine, and plaque could easily be scraped away. Generations of patients went away smiling and in good dental health.

As a patient, however, Schwab faced a far more cunning adversary: cancer. He had lost his three younger siblings to the disease, and, at 76, knew he was lucky to have survived his own bout with melanoma in the 1960s. After a long day at work, he would pull out his old pathology reports, think of his wife and kids at home, and remind himself that things could be much worse.

This seemed the case when Schwab received a second and more serious melanoma diagnosis in 2016. But a lot has changed in the decades since his first time with cancer, and he is undergoing treatment at Dana-Farber with profound optimism – due, at least in part, to recent breakthroughs in immunotherapy. Schwab is among a growing number of patients benefiting from remarkable advances in the field, which centers on harnessing the power of the immune system to fight cancer.

This revolution capitalizes on our immune system’s natural function – recognizing foreign cells and attacking them. But cancer cells often find their way by this surveillance. One way is through the use of natural proteins called immune “checkpoints” that act as brakes to prevent an immune system attack.

Now, led in large part by researchers at Dana-Farber, scientists have learned how cancerous cells work their deception. Partnering with colleagues around the world, they are developing checkpoint inhibitors, drugs that take off the brakes and let the immune system do its job. Some tumors that once proved stubbornly resistant to chemotherapy and other treatments are being thwarted quickly and dramatically, a breakthrough that is offering some patients their best chance yet of beating even the most challenging cancers like melanoma and lung cancer.

“What’s exciting to me about immunotherapy drugs and checkpoint inhibitors is not only their underlying efficacy, which is very impressive, but the fact that they work through a mechanism that’s completely different from our other treatments by mobilizing a patient’s own immune system,” says Barrett Rollins, MD, PhD, chief scientific officer at Dana-Farber. “That tells us that there is this wonderful new pathway for us to exploit – basically a whole new way to treat cancer.”

Checkpoint inhibitors have been approved for use in six types of cancer, and are currently being evaluated in hundreds of clinical trials in more than 30 cancer types – with more than 80 of those trials at Dana-Farber. But challenges remain: Only 20 to 25 percent of patients benefit from checkpoint inhibitors, and some encounter serious side effects. Researchers are working to develop new strategies – including combining checkpoint inhibitors with other immunological drugs, vaccines, radiation therapy, and traditional chemotherapy agents – to find the best approach for each patient’s cancer.

The emergence of checkpoint inhibitors represents the fulfillment of long-held hopes. For more than a century, researchers sought to harness the body’s own cell-fighting abilities as a means of killing cancer. They knew that the immune system could stop infections and malignancies in their tracks before they could damage healthy tissue, but they didn’t know all the intricacies of the process – or why cancer could often resist it.

In the 1990s, scientists learned more about the role of T cells, the foreign body watch dogs – and attack dogs – of the immune system. It is T cells that scramble to shut down invading cells. Initially, researchers couldn’t figure out how cancer cells were avoiding the T cells’ attack. Then, in 2000, Dana-Farber scientist Gordon Freeman, PhD, and his colleagues discovered the protein PD-L1 – and they had their answer. Freeman’s team found that PD-L1 can cover the surface of healthy cells like a coat, and it is this coat that binds molecules on incoming T cells known as T-cell co-receptors (PD-1). The co-receptors serve as both brakes and hall passes, telling T cells that an immune response is not needed and giving the healthy cells free reign of the body.

The challenge is that some cancerous cells are also coated in PD-L1, making them essentially wolves in sheep’s clothing. By fooling T-cell co-receptors into thinking they are healthy, these malignant cells can avoid an immune response just like their healthy counterparts – and allow cancer into the body. Blocking PD-L1 (or its related binding molecule, PD-L2), Freeman’s team concluded, could “turn off the brakes” and allow the immune system to kill off the cancerous cells.

Pharmaceutical companies went to work developing drug agents to block PD-1, PD-L1, or PD-L2 and give the immune response the help it needed. And as these first immune checkpoint inhibitors became available, Dana-Farber physician-scientists began administering them to patients with a variety of cancer types for whom standard chemotherapy or other treatments had failed.

In one trial of the PD-1 blocker nivolumab, 87 percent of Hodgkin lymphoma patients who had not responded to chemotherapy or a stem cell transplant experienced a full or partial remission – and the majority were still doing well 18 months later. Hodgkin lymphomas have a genetic basis for enhanced PD-1 signaling, the likely reason for the very high response rate to PD-1 blockade.

Study leaders Margaret Shipp, MD, and Phillippe Armand, MD, PhD, of Dana-Farber published their findings in the New England Journal of Medicine and in 2015 the U.S. Food and Drug Administration (FDA) gave nivolumab its Breakthrough Drug Designation for use in Hodgkin lymphoma patients. By the start of 2017 nivolumab had been FDA-approved for use on individuals with Hodgkin lymphoma, melanoma, non-small cell lung cancer, bladder cancer, kidney cancer, and squamous cell cancer of the head and neck.

“The Hodgkin lymphoma findings are a variation on the precision medicine theme,” says Shipp. “Instead of finding genetic alterations in tumors and attacking the tumors directly with precision drugs, here we’re targeting alterations in tumor cells that shield them from attack by immune cells.”

Ipilimumab, a drug targeting another checkpoint protein, CTLA-4, has shown promise for patients like Jay Schwab with advanced melanoma. Stephen Hodi, MD, of Dana-Farber led a phase 3 clinical trial testing ipilimumab in patients whose melanoma had not responded to other treatment. Just as in the PD-1 studies, the results were dramatic.

Patients who received the CTLA-4 blocker ipilimumab lived significantly longer, on average, than those who did not, marking the first time survival rates for metastatic melanoma had ever gone up through treatment. Some patients even appeared to be cured, and by 2011 ipilimumab had received FDA approval as a metastatic melanoma therapy. More than 2,000 metastatic melanoma patients have since received it at Dana-Farber and elsewhere, and about 20 percent have benefited from it. Of these individuals, the majority are alive today.

“We are seeing miraculously rising survival rates,” says Elizabeth Buchbinder, MD, Schwab’s primary oncologist at Dana-Farber. “Before checkpoint inhibitors, melanoma was unfortunately a very aggressive cancer that did not respond well to any treatment. Now many patients are years out from their checkpoint inhibitor treatment and doing great. In many of them, their disease is shrinking.”

Putting It All Together

The challenge now is to build on that progress. As researchers continue learning more about which immunological approaches work best, and in which cancers, they are treating patients with combination therapies in which checkpoint inhibitors are given with other treatment such as chemotherapy, vaccines, or radiation therapy.

“One area of investigation that Dana-Farber scientists like Stephen Hodi are studying is why certain people don’t respond well to checkpoint blockades,” says Bruce Johnson, MD, chief clinical research officer at Dana-Farber. “Some may need a way to stimulate their T cells, while others require inflammatory cytokines that are suppressing their immune response removed. We need to sort out what we understand about these tumors to know which drugs might work in concert with a checkpoint inhibitor.”

Sometimes, Johnson explains, cancer cells may have two different checkpoints that are keeping an immune system attack at bay; in these cases, two checkpoint inhibitors may be an effective treatment option. Other studies – forming in fact, an almost new field of their own – involve removing, modifying, and reinserting a patient’s T cells to make them better able to detect and destroy cancer cells. The list of cancers targeted successfully by checkpoint inhibitors continues to grow, as does the number of patients receiving them. Elaine Shusterman is one example. A patient of Johnson’s, Shusterman was diagnosed with non-small cell lung cancer in June 2016. In addition to being treated with nivolumab, a PD-1 inhibitor approved by the FDA in 2015, she is also receiving a CTLA-4 inhibitor to stimulate her T cells.

“I know my lung cancer is not totally curable, but thanks to this treatment we’re hoping to make it a chronic disease,” says Shusterman, 66, who after starting on an immunotherapy trial in August 2016, spent that October hiking to the bottom of the Grand Canyon. “There has been significant shrinkage in pretty much all of the spots on my lung, and I had a lump on my neck that appears to be completely gone. I feel great.”

While Johnson calls immunotherapy and checkpoint inhibitors “the biggest thing to happen to lung cancer in more than a decade,” he knows mysteries remain. It’s not clear, for instance, why many patients do not respond to the treatment. The side effects also differ; Shusterman didn’t lose her hair or suffer from nausea, but the powerful immune response carried out by T cells can sometimes affect healthy tissue and organs. This can cause problems ranging from skin rashes to more serious issues like pneumonitis (inflammation of the lungs), colitis, hepatitis, and pancreatitis.

Dana-Farber’s Center for Immuno-Oncology, directed by Hodi, is looking into such issues and is involved in nearly 100 clinical trials using checkpoint inhibitors and other immunotherapy treatments including vaccines. Physician-scientists believe that combination therapy approaches using PD-1 inhibitors as the “backbone” of treatment will be a key to improving the accuracy and success of immunotherapy.

“One important reason why PD-1 inhibitors do not work in many patients is that the immune cells that promote the attack against the cancer have not reached the tumors in sufficient numbers,” says Patrick Ott, MD, PhD, clinical director of the Center for Immuno-Oncology. “One of the approaches to tackle this problem is adding a cancer vaccine, which has the ability to increase the numbers of these cells and to potentially drive them into the tumor.”

This approach has already shown some success in melanoma patients. Adding a drug called TVEC, which has cancer vaccine properties in addition to its tumor-killing effect, has shown to substantially increase the clinical activity of ipilimumab and is currently in clinical trials in combination with PD-1 inhibitors. Another mechanism that can suppress an immune response against cancer is an enzyme called IDO; using small molecules of it in combination with PD-1 inhibitors has shown early promise (as evident by higher response rates in melanoma and lung cancer) – leading to several clinical trials in different cancers.

“We have a new strategy to attack all cancers. The success of immunotherapy has opened the door and also unleashed a flood of creativity and discovery,” says Gordon Freeman. “We know ways we can do better and are bringing those to patients. In 10 years, we hope that 60 percent of patients will be benefitting from immunotherapy.”

In the meantime, Freeman and others will be learning from patients like Schwab and Shusterman, each of them a pioneer in this powerful new era in cancer research and care.