It’s a compelling idea that has attracted scientists for decades: rather than poison tumors with chemicals and radiation, use a biological agent – a vaccine – to rally the body’s formidable immune defenders to kill cancer cells and shrink tumors.

Yet, even as other forms of immunotherapy are showing promise against some cancers, efforts to make an effective and safe cancer treatment vaccine have struggled.

Treatment vaccines differ from preventative vaccines, such as the human papilloma virus (HPV) vaccine, which prevents cancers caused by certain strains of HPV. A treatment or therapeutic cancer vaccine, by contrast, is designed to stimulate a patient’s immune system to attack cancer cells. Only one such vaccine – Provenge, for advanced prostate cancer – is approved for wide use. Much of the time, despite researchers’ best schemes, vaccines have failed to land much of a blow against cancer.

But rather rapidly, a series of molecular discoveries, together with increasingly powerful DNA sequencing methods and predictive computer algorithms have brought a promising new vaccine concept based on “neoantigens” to the table – and, just recently, to the clinic.

Neoantigen vaccines are highly personalized therapies. An antigen is any substance the body encounters that provokes an immune response. “Neo” antigens are molecules newly minted by mutations that occur randomly as cancer cells divide and grow. Neoantigens are unique to each patient and his or her cancer, and – critically important – can be recognized by the immune system as foreign. The neoantigens from a patient’s tumor are used to make a customized vaccine that stimulates the immune system to react against cancer cells that carry the selected neoantigens.

“It’s a new thrust – neoantigens are reinvigorating the vaccine field,” says Catherine Wu, MD, a Dana-Farber physician-scientist who has discovered unique mutated neoantigens in leukemia and is a leader in neoantigen vaccine development.

Scientists have long tried to create cancer vaccines that contain a distinctive antigen – some molecule or part of the cancer cell which would spur an immune response against the tumor, while leaving normal organs and tissues in the body unscathed. The problem is, while the immune system can recognize antigens on cancer cells, these antigens tend to be similar to those on normal cells. As a result, the immune system fails to respond with enough power to subdue tumor growth. Cancer cells are also adept at hiding their identifying antigens.

“Finding a good antigen for a cancer vaccine has been difficult because most are ‘self-antigens’ – they induce tolerance by the immune system,” explains Patrick Ott, MD, PhD, clinical director of the Center for Immune Oncology at Dana-Farber. Tolerance refers to the lack of an immune reaction against an antigen perceived as harmless.

Neoantigens are unique not only to the cancer but also to the individual patient; they are antigens that the immune system has never encountered. As a result, the body’s defenses should have zero tolerance for a cell bearing a neoantigen.

Scientists say the vaccine, which is injected under the skin, appears to trigger strong immune activity in some patients.

Wu and Ott, working with collaborators at the Broad Institute of MIT and Harvard, have developed a personalized neoantigen-based vaccine called NeoVax. NeoVax is in early trials at Dana-Farber in patients with advanced melanoma, glioblastoma brain tumors, and kidney cancer. The scientists say the vaccine, which is injected under the skin, appears to trigger strong immune activity in some patients, with no safety problems.

“What’s exciting about neoantigen vaccines is that the T-cell responses to these peptides tend to be highly tumor specific,” says Kai Wucherpfennig, MD, PhD, chair of Dana-Farber’s department of Cancer Immunology and Virology. “I think this is going to be important.”

Neoantigen vaccines are in very early human testing and haven’t yet been shown to benefit patients. They have, however, been shown to control cancer in animals. There is also indirect evidence for the power of neoantigens in humans. Some studies have found that patients treated with checkpoint inhibitors have better outcomes if their tumors contain greater numbers of neoantigens. This suggests that the patients’ immune systems are reacting more strongly to the tumor because of neoantigens on the cancer cells’ surface, and scientists see this as an indication of how a neoantigen vaccine would cause a more potent immune response.

Even at this early stage, Wu and her colleagues are confident they are onto something transformative.

In a 2013 paper published in Cancer Immunology Research, she and her co-authors wrote: “We are entering a new era of cancer immunotherapy in which a sophisticated vaccine loaded with patient-specific neoantigens is poised to generate a powerful yet precisely targeted antitumor immune response.”

Any success that neoantigen vaccines may have, they will owe in part to rapidly developing DNA sequencing technology and computational bioinformatics. 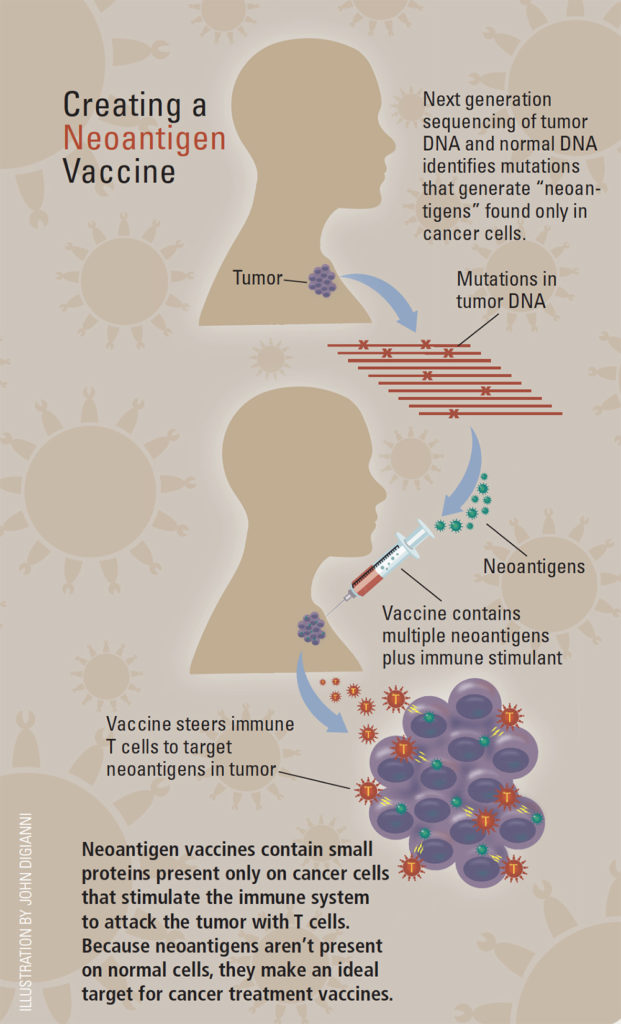 cells evolve – mutations that didn’t necessarily cause the tumor or drive its behavior, but occur only in the cancer cells and not in healthy cells. Only in the past few years, with powerful whole-exome sequencing technology, has it become feasible to rapidly search through the protein-coding parts of a patient’s normal genome and the tumor’s genome in order to identify all the mutations that have occurred.

To make a neoantigen vaccine, scientists first sequence the patient’s tumor exome DNA and compare it to the DNA of the patient’s normal tissue to reveal neoantigens in the tumor. Next, they use computer algorithms to predict which neoantigens are most likely to bind to antigen-presenting cells in the patient’s immune system – necessary to provoke a strong immune response. Then the DNA code for those neoantigens is used to make peptides – pieces of protein – that go into the vaccine, along with an immune-stimulating substance called an adjuvant.

Ideally, Wu says, a vaccine would contain all the neoantigens discovered by sequencing the tumor DNA, but for practical reasons the NeoVax vaccine uses a smaller number – around 16 to 20 neoantigens, for example, in the melanoma vaccine.

In the ongoing clinical trials, the neoantigen approach is showing encouraging activity and safety profiles.

In one Dana-Farber study, the NeoVax vaccine is being given to six patients with melanoma who have had their tumors removed surgically. The study is examining the safety of the vaccine and whether the vaccine is triggering an immune response among T cells called CD4 and CD8. Says Wu: “Based on our computer predictions, we generated vaccines directed against antigens on the tumors, and all four of the patients with stage III disease have remained in remission.”

The two patients with stage IV disease who had recurrences were treated with pembrolizumab, an immune checkpoint-blocking drug, and went into complete remission, says Wu. In addition, patients treated with the combination of vaccine and pembrolizumab had persistent and broadened neoantigen-specific responses. “This is very exciting, because at the very outset, our concept was not to use the vaccine alone – we wanted to use available tools and put them together,” she notes. The vision was to use the vaccines to “steer” the immune response to focus on the neoantigens, in combination with the checkpoint inhibitor drugs, such as those that target PD-1 and PD-L1, to release the “brakes” on the immune reaction to attack the cancer.

In a clinical trial led by David Reardon, MD, clinical director of Dana-Farber’s Center for Neuro-Oncology, nine patients with glioblastoma brain tumors received the NeoVax vaccine following surgery. Reardon says that “while it is too early to ssess impact on survival outcome, we have been able to demonstrate robust T-cell immune responses” to neoantigens in some patients, with no safety issues.

A second trial combining NeoVax with a checkpoint-blocking drug for newly diagnosed glioblastoma patients has been approved and should open this year.

This article originally appeared in Dana-Farber’s 2017 issue of Paths of Progress.