A growing arsenal of new drugs that unleash the body’s immune system against tumors has captured the cancer treatment spotlight. Immunotherapy in different forms—checkpoint blockers, vaccines, and CAR T cells, for example—has had unprecedented success in halting or shrinking even advanced cancer in some patients, and prolonging lives in cancers such as melanoma.

In mid-2017, it was reported that 248 new immunotherapies and vaccines were in clinical trials, and trials testing combinations of immunotherapies with other treatments such as chemotherapy numbered 765.

Nevertheless, the sobering fact is that at present immunotherapies help only a minority of patients with a given cancer type, and in some types of cancer they have had little or no success. A major focus today is to discover why immunotherapies work or fail, and how they can be improved to reach their hoped-for potential as a broadly transformative treatment for cancer.

“This is what everybody wants to do now,” says Gordon Freeman, PhD, a Dana-Farber immunologist who made fundamental discoveries leading to checkpoint-blocking drugs. “The door is open, and now we want to expand the benefits.” 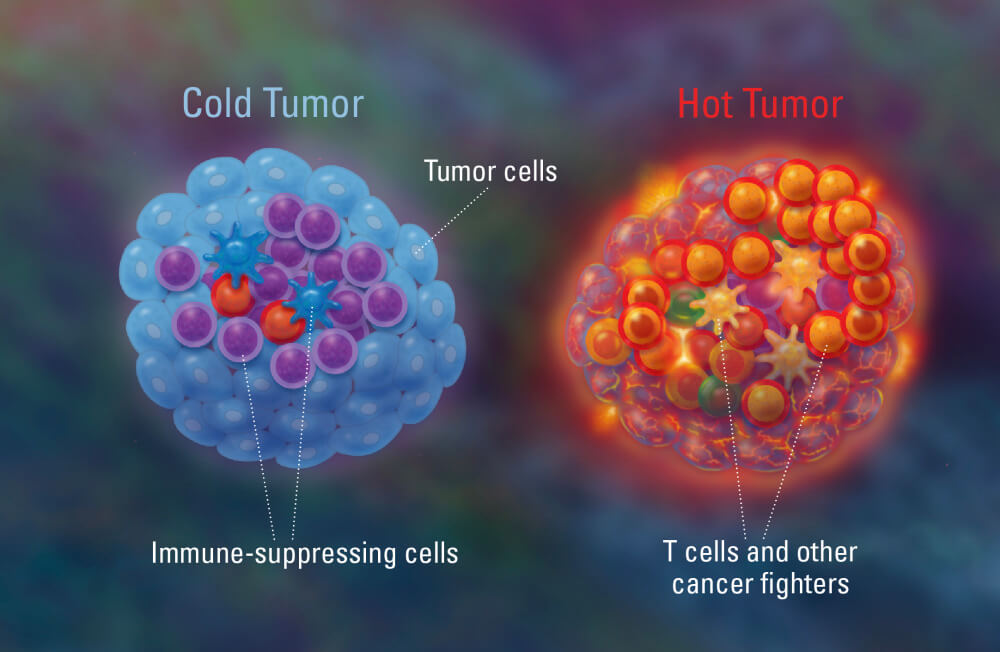 Checkpoint inhibitors work best against so-called hot tumors. These are cancers that have been invaded by swarms of T cells, creating an inflamed tumor. This response by the immune army hasn’t killed the tumor, but because T cells are present within the tumor, they are more easily mobilized against the cancer. Checkpoint inhibitors release the brakes the tumor has clamped on the T cells, which are then free to fan a smoldering fire into a cancer-killing inferno.

Hot tumors often have a high mutational load. That is, they have many changes in their DNA code that cause the cancer cells to produce distinctive new molecules called “neoantigens” on their cell surface. These neoantigens make the tumor more prone to recognition by the immune system, and thus more likely to provoke a strong immune response.

“Cold” tumors, by contrast, are cancers that, for various reasons, haven’t been recognized or haven’t provoked a strong response by the immune system. Immune T cells have been unable to penetrate such tumors. The T cells have been excluded by components of the microenvironment. The microenvironment in and around tumor cells comprises blood vessels, structural elements, and specialized immune cells; the latter include myeloid-derived suppressor cells and regulatory T cells, or Tregs. These Tregs turn down the volume on the normal immune response by secreting immunosuppressive chemical messengers like cytokines that impede the movement of T cells into the tumor. The result is what some have called an “immune desert” around the tumor.

“It’s like a castle encircled by a moat,” explains Laurie H. Glimcher, MD, president and CEO of Dana-Farber and a prominent immunologist. The T cells can’t attack the castle if they are stranded outside by the moat. Since a cold tumor has few T cells within it, checkpoint blockers are less likely to be effective than they are against hot tumors.

Herein lies one of the limitations of immunotherapy at present. “Only eight cancers to date are ‘hot,’” says Glimcher. “And even within those, it is a minority of patients who benefit.” Among the cancers generally considered hot are bladder cancer, head and neck cancers, kidney cancer, liver cancer, melanoma, and non-small cell lung cancer, as well as tumors of different types that have a genetic characteristic called high microsatellite instability.

The challenge, Glimcher says, is in applying immunotherapy to cancers that are immunologically cold, such as glioblastomas (the most common type of brain cancer), ovarian, prostate, and pancreatic cancer. “How do we make them immunoresponsive?” Glimcher asks.

At Dana-Farber, many scientists are tackling this issue—one of the most important questions for the future of immunotherapy. They are developing and testing an array of strategies aimed at converting cold tumors into hot ones.

In a small clinical trial carried out by Dana-Farber’s F. Stephen Hodi, MD, and colleagues, a type of human herpes virus that infects cancer cells was injected into tumors of 21 patients with advanced melanoma. Subsequently, the patients received pembrolizumab, a checkpoint inhibitor. The combination of virus and checkpoint blocker shrank tumors in a remarkable 62 percent of patients, with a complete response rate of 33 percent; those rates were higher than for either the virus treatment or checkpoint inhibitor therapy alone. And there were no unexpected side effects.

What happened in the patients who responded, according to the investigators, was that the viral infection reprogrammed the microenvironment in patients whose tumors initially were cold. The virus attack inflamed the tumor, attracted immune antigen-presenting cells, and recruited two types of T cells that can kill tumors. Whether this strategy can work on a larger scale is being tested in a phase 3 clinical trial. Meanwhile, Hodi and colleagues are also attempting to make tumors hotter by giving anti-angiogenesis drugs such as Avastin, which help bring immune cells into the tumor microenvironment.

Testing the concept in patients is just beginning. Schoenfeld is leading a nationwide clinical trial combining radiation therapy with the checkpoint inhibitors durvalumab and tremelimumab in patients with lung and colorectal cancer.

A personalized cancer treatment vaccine that targets patient-specific tumor neoantigens showed it could stimulate a potent anti-tumor response in melanoma patients who were at high risk for recurrence following surgery.

Dana-Farber researchers led by Catherine J. Wu, MD, and Patrick A. Ott, MD, PhD, reported in 2017 on six patients who received the vaccine, called NeoVax. The vaccine was created using neoantigen peptides from the patients’ melanoma tumors. When injected into the patients, the vaccine spurred responses by immune T cells, both helper and killer T cells, that recognized the neoantigens on the tumor cells. Four of the six patients had no recurrence of the cancer at a median of 25 months. Two patients had recurrences, but were then treated with the checkpoint inhibitor pembrolizumab, resulting in complete disappearance of their cancer. The researchers say these outcomes support the idea of a doublepunch against tumors: using vaccines to rev up an immune response combined with checkpoint blockers to release the brakes.

In laboratory experiments, Dana-Farber scientists have used tiny nanoparticles to deliver immune-stimulating drugs into tumors with pinpoint accuracy in an effort to enhance both the effectiveness and safety of immunotherapy.

Nanoparticles are extremely small manufactured spheres that can be loaded with a variety of drugs and chemicals. A team led by Michael Goldberg, PhD, a researcher in Dana-Farber’s Cancer Immunology and Virology department, engineered drug-filled nanoparticles that seek out and bind to key T cells. The T cells then migrated to solid tumors—making them “hotter”—where they attacked the cancer cells with increased vigor. The heightened activity of the T cells prolonged the survival of tumor-bearing mice.

Several years ago, before becoming Dana-Farber’s president, Glimcher discovered a basic process in cells under stress—immunosuppressive dendritic cells, for example—that creates a microenvironment that prevents T-cell invasion of tumors. When the cell senses a stress – like a shortage of oxygen or nutrient deprivation, which are conditions typical of cancer cells – it activates a signaling pathway known as IRE1/XBP1. Glimcher says silencing that pathway in ovarian cancer tumor-associated dendritic cells reprogrammed them into highly immune activating cells.

“That showed we can reprogram that tumor microenvironment to get T cell activation and enhance tumor immunity—in effect, making the tumor hotter,” she says. She suggests that this line of research could lead to small-molecule drugs that might be effective against ovarian cancer.

The checkpoint molecule PD-1 acts like a brake on the immune response by keeping T cells in an inactive or “exhausted” state. In an effort to improve immunotherapy by reviving the slumbering T cells, investigators led by Dana-Farber’s Kwok-Kin Wong, MD, PhD, searched for small-molecule drugs that could increase T cell activity. They discovered that short-term exposure of tumors to drugs that inhibit cyclin-dependent kinases 4 and 6 (CDK4/6) strengthened T cell activation, increasing the penetration of T cells into tumors in laboratory models. While the CDK4/6 inhibitors—some of which are approved for treating breast cancer—didn’t eradicate tumors on their own, they worked synergistically with PD-1 checkpoint inhibitors in the laboratory models, suggesting that the combination is worth trying in patients, say the researchers.

These are just a few of the strategies being pursued; it’s hoped that some will prove worthwhile to develop as practical treatments.

“The challenge now is taking these findings and turning them into real drugs that we can test through clinical trials,” says Freeman. “There are so many good ideas. We need to prioritize and test them.”

Still, it is a good problem for immunotherapy researchers to have. Now that it’s becoming clearer why this form of treatment often fails—even though it’s a highly complicated picture—scientists have a wealth of leads to follow in bringing the heat to cold tumors to expand the reach of immunotherapy.