Nancy Hale was given a 30 percent chance of surviving three years when she was diagnosed with lung cancer. But today, six years after her initial diagnosis and because of an immunotherapy clinical trial, Hale is in remission—and “blazing the trail” for other patients.

It all began with a feeling that something was not quite right. Hale, an active resident of Burlington, Vt. who loves snowshoeing, cycling, and other outdoor activities, experienced that feeling in April 2012.

Hale was skiing 12,000 feet above sea level in Colorado with her husband, Dave, who she had married six months earlier. After returning from a day of hitting the slopes, she felt short of breath and extremely tired, leading her to wonder if she was experiencing altitude sickness.

The next day, she woke up and couldn’t move or breathe. There was excruciating pain in her chest that “hurt like the dickens,” Hale recalls. But she was resolute: She was in Colorado, and she was going to go skiing.

She did, and the pain subsided. But Hale still had that nagging feeling that something was wrong, and she made an appointment to see the doctor. An X-ray revealed the news: She had stage III non-small cell lung cancer. There was an eight-centimeter tumor in her right lung, which had spread to her lymph nodes and chest.

Hale’s oncologist in Vermont suggested she undergo 12 weeks of chemotherapy and radiation, which slowed down the cancer’s growth, but only momentarily. It was back again four months later, and after more chemo, the cancer returned once more. After her second year of treatment, by which point her cancer was categorized as stage IV, she was told she would have three more years to live. 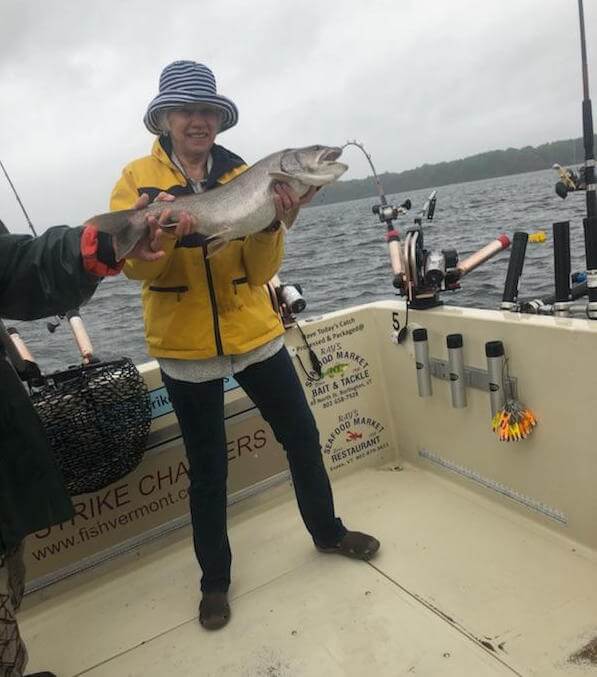 Hale was tired of all of the treatment, and opted to stop chemotherapy. Meanwhile, her friend urged her to explore clinical trials. She did, and with the help of her Vermont oncologist, she landed on a trial at Dana-Farber Cancer Institute under the care of Geoffrey R. Oxnard, MD, of the Lowe Center for Thoracic Oncology. She received biweekly infusions of pembrolizumab (Keytruda), an immunotherapy drug that uses the immune system to attack cancer.

“Before I got on the clinical trial, I said, ‘I’ve got to think about this because I don’t know if it’s worth it for me,’” Hale says. “I later told my friend that he saved my life.”

It was a 216-mile one-way drive from Vermont to Dana-Farber in Boston and throughout treatment Hale experienced some of the worst winter storms Boston had seen in decades. But she found a way to look at the bright side: “I would just smile some nights because it was so beautiful,” she reminiscences.

And it was worth it: Scans showed that Hale’s cancer was shrinking because of the immunotherapy, and finally, a scan revealed the best news—no sign of the cancer at all. In October 2015, Oxnard pulled Hale off of the treatment, assuring her that could go back on the treatment if need be.

“I said, ‘Nancy, we’re ahead of the curve here; we never expected we’d be here, and we’re blazing the trail,’” Oxnard recalls. “Nancy is an amazing example of how you can take someone who’s dying of lung cancer and instead, help them live with lung cancer—even work to put it behind them,” Oxnard says.

Three years later, Hale is still healthy, and she’s active in the lung cancer patient community. She has participated in the annual Stowe Weekend of Hope, where she has met other patients being treated with pembrolizumab—now approved as standard treatment for some forms of non-small cell lung cancer. She also helps counsel and support patients one-on-one, is a board member of the American Lung Association, and is working on starting up her own Vermont support group.

And she tries to spend as much time as she can with Dave, her two sons, Brent and Travis, and her three grandchildren.

“I do consider myself a success story, and I think I’m here for a purpose,” she says.