Logic said that drugs known as PARP inhibitors would work as well ­— and perhaps even better — in breast cancer marked by BRCA gene mutations than in ovarian cancer carrying the same abnormalities. Clinical results said otherwise.

Researchers puzzled over this discrepancy for years. The most common forms of breast and ovarian cancer are surprisingly similar. They both develop in tissues on the surface of an organ. And they’re both driven by the same genetic shortcoming — a vulnerability that PARP inhibitors are specifically designed to exploit. There was every reason to think the drugs would be equally effective against both diseases.

In a new study, Dana-Farber scientists show why they aren’t. The answer, it turns out, lies in an interaction between breast tumor cells and immune system cells known as macrophages. Specifically, researchers found that breast tumor cells carry out a feat most lawbreakers can only dream of — turning their adversaries into accomplices. The effect of this role reversal is to neutralize PARP inhibitors as a cancer therapy.

The change need not be permanent, however. In follow-up experiments, researchers found that drugs targeting a key protein pathway in macrophages can turn the cells back into cancer warriors. The finding, reported in a paper in the journal Nature Communications, opens the way to clinical trials of PARP inhibitors in combination with drugs targeting that pathway.

“Although the FDA has approved PARP inhibitors for ovarian and breast cancer with BRCA mutations, it was clear by 2016-17 that they were far more effective against ovarian cancer than breast cancer,” says the study’s senior author, Jean Zhao, PhD. “In 2020, a paper at ASCO [the annual meeting of the American Society of Clinical Oncology] presented data showing that the PARP inhibitor olaparib produced no overall survival benefit in patients with BRCA-mutated breast cancer. That prompted Qiwei Wang [PhD], a postdoc in our lab, to resume a research project he had been doing into the mechanism by which PARP inhibitors work in breast cancer. Our new study presents the findings of that project.”

The purpose of PARP

PARP inhibitors work by making a tenuous situation within some cancer cells even worse. The PARP protein signals a cell that DNA damage has occurred so it can be repaired. Olaparib and other PARP inhibitors prevent that signal from being sent, allowing DNA damage to accumulate. In cancer cells already encumbered by a balky DNA-repair system — because of a mutated BRCA gene, for example — the additional build-up of DNA damage can be fatal.

So why wasn’t that happening with BRCA-mutated breast cancer cells? Wang, the first author of the new study, examined the effect the cells had on neighboring macrophages.

Despite their well-earned reputation as crushers and destroyers of infecting or damaged cells, macrophages actually perform a variety of roles, which exist along a spectrum of responses to cancer. At one end of the spectrum are M1 macrophages, which help eliminate bacteria and suppress tumors. They summon other components of the immune system to remove dead or disabled cells. At the other end are M2 macrophages, which are normally involved in tissue repair.  In the presence of cancer cells, M2 macrophages put their tissue-building and cell-fortifying skills to work in service of the tumor. They become, in effect, the tumor’s enablers.

In the laboratory, Wang grew BRCA-mutated breast cancer cells in the presence of so-called “naïve” macrophages, which hadn’t specialized as M1 or M2. “We found that the tumor cells caused the macrophages to ‘polarize’: many more of them were programmed to become the M2 subtype than the M1,” Zhao relates. “This contrasts with ovarian cancer cells, which cause far less polarization of macrophages.”

These divergent effects underscore that despite the similarities between BRCA-mutated breast and ovarian cancer cells, they are fundamentally different cell types with different sets of active genes, Zhao observes. The breast cancer cells secrete substances (scientists have yet to identify them) that polarize macrophages to a far greater degree than ovarian cancer cells do.

PARP inhibitors aren’t the only drugs rendered less potent by M2-like macrophages. The macrophages also inhibit the activation of immune system T cells, which are expert cancer-fighters. “The activity of M2-like macrophages is multi-layered,” Zhao says, “making tumors resistant to many therapies.”

The obvious way to double-cross M2-like macrophages ­— and restore the efficacy of PARP inhibitors — is to eliminate or reduce the number of those macrophages. Drugs that block the CSF1 receptor on macrophages can do just that, but haven’t worked well in clinical trials and are often highly toxic.

Zhao’s team focused on another target: a cascade of protein activity within macrophages and other immune system cells known as the STING pathway. “We found that STING agonists — drugs that switch on the STING pathway — reprogram M2-like pro-tumor macrophages to become M1-like anti-tumor macrophages,” Zhao remarks. The M1-like macrophages work in unison with PARP inhibitors to strangle tumor growth. The STING agonists also rouse other components of the immune system to launch an attack on cancer cells, the researchers found.

In both laboratory cell lines and animal models of human BRCA-mutated breast cancer, STING agonists reversed the cancer’s resistance to PARP inhibitors. The researchers found that the agonists work best when given systematically — infused into the bloodstream — than when injected directly into the tumor.

The findings lay the groundwork for clinical trials combining a PARP inhibitor with a STING agonist in patients with breast cancer carrying BRCA mutations, Zhao says. 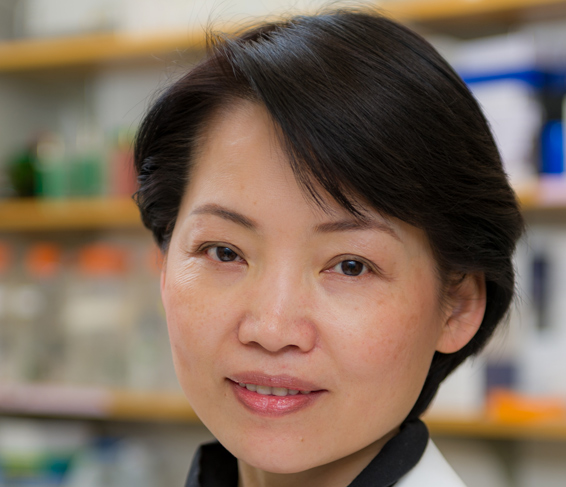