Steven Clifford is an 18-year-old osteosarcoma survivor. A Boston native, he starts college at the University of California, San Diego this month. This is his story.

Life is made up of many difficult decisions. However, imagine my surprise when I had to make a tough and potentially life changing decision at the young age of 11. Up until then, I just was an average child who couldn’t wait to get out of school to play any sport imaginable with his friends. 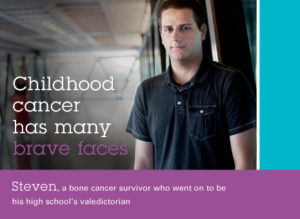 All that came to a close when I was diagnosed with osteosarcoma, a bone cancer, in the tibia in my right leg. The innocent days of childhood were washed away, and suddenly I was faced with decisions that can be difficult for a grownup to make, never mind an 11-year-old kid.

One of the biggest choices came pretty early on: What would happen to my leg?  My doctor from Dana-Farber/Boston Children’s Cancer and Blood Disorders Center, Megan Anderson, MD, explained that I had two options to choose from when it came to surgery: either bone resection (removing the cancerous part of my tibia) or amputation of my leg.

I would like to say that my choice was easy but it was nothing such. Each had its benefits. With the amputation, I would still be able to play all of the sports I loved with a prosthesis, but at the time I wasn’t sure I could deal with the emotional strain it would put on me. With resection, I would be able to keep my leg intact and be perceived as “normal,” but because the plates and screws in my leg were only made to walk on, I would have to give up on my dream: becoming a professional football player.

Being 11, most people believe that the decision was unusual for me to make, and I would definitely agree if I had been a normal 11-year-old. By the time the decision needed to be made, I had already showed maturity beyond my years within each chemotherapy treatment. I can’t say that my opinion was the only one that mattered though. I had many discussions with my family about what option they believe to be best. All of these conversations definitely encouraged me that I was making the right decision.

Ultimately, I chose the resection, thinking that the emotional impact would be less. Before the surgery, I had to have two months of rigorous and exhausting chemotherapy. But Holcombe Grier, MD, the oncologist on my care team, finally told me my tumor was small enough to surgically repair. I had the surgery two weeks later.

Looking back upon my experience, I am not sure if I would make the same choice if faced with the decision again, but I am definitely happy with the one I made. It could be because I was able to keep my leg, but I think it’s more that I have enjoyed my experiences the way I currently am.

The biggest adjustment for me was talking to my friends about everything. It was great that people from Dana-Farber/Boston Children’s went to my school and had an assembly letting everyone know what was going on, but my friends were still not quite sure what this all meant. For the most part, we never truly talked about it at first. I think that was good for me at first, as it got my mind away from all of the issues I was facing and allowed me to still be a kid. As I got older, though, I started to write more and more about my experiences. Writing helped me sort out everything I was feeling, but when it came to explaining things to close friends I would give an in-depth analysis of my leg and everything I had gone through. It helped me to talk about it, and sharing that kind of story with my friends often ended up making us even closer.

Choosing resection meant that I couldn’t play sports anymore. Instead, I focused most of my effort in to my schoolwork. This is not to say that I wasn’t a good student before (I was receiving straight A’s before the surgery) but now it was different. I saw and still see education as a necessity, but having it take center stage—this was the changing point in my life. Understanding that education was important, I realized that my interests and energies could be expanded into my schoolwork. Following that path, I ultimately ended up giving the valedictorian’s speech at my high school graduation this past spring.

During my treatment, it was difficult to do my schoolwork and I never wanted to do it as I was always exhausted. But once I got started, I didn’t want to stop. It took my mind off of the treatment and I usually felt better while doing it. It allowed me to feel like every other kid that had to finish their homework before they were allowed to play outside.

As I look forward to entering college, I know I have many, many more decisions ahead of me in life, though hopefully none of them will have the same gravity as the ones I’ve already had to make. But one decision has come pretty easy in the last few months. After treatment, I really took an interest in science, and in particular biology. Something about how the body works really started to intrigue me. That interest, along with my personal connection to oncology, has set a path for what I want to do in the future.

I want to help the future children and families that have to face the decisions by becoming a pediatric oncologist. I believe that I can help and relate to the patients. By taking this path, I feel like I am giving back to others. I had great help when I was receiving treatment and I would like others to have the same.