Caitlynne McGaff is an active 17-year-old. She owes a lot of her mobility to an innovative surgery she had at Dana-Farber/Boston Children’s Cancer and Blood Disorders Center to treat her osteosarcoma. This is her story.

When most people my age talk about a day they’ll never forget, they mention getting their license, or a great sweet sixteen party. For me, it’s a little different. 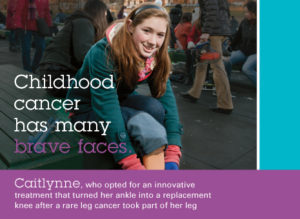 I’ll never forget March 1, 2001, because it was the day I was diagnosed with cancer. I was just 6 years old at the time, and honestly didn’t fully understand what was happening when the doctor said I had a bone tumor known as osteosarcoma growing just above my knee. But from the shocked looks on my parents’ faces I knew it was big. The rest of the day is a blur. We went from doctor to doctor, office to office, as my new medical team explained my treatment plan to me and my parents. It was a whirlwind, but over time everything became normal, almost comforting. Dana-Farber/Boston Children’s Cancer and Blood Disorders Center became like a second home to my family and me. Wednesdays were the longest day because that’s when I had chemotherapy. But the staff at Dana-Farber/Boston Children’s offers so many entertainment options to its patients you almost forget why you’re there. I may have spent hours tethered to an IV that delivered my medications, but all I remember are the endless arts and crafts projects I did, or the time spent with nurses and doctors I came to see as friends. (Not to mention hours and hours of board games.)

When my chemotherapy session was over I’d head to my room on 7 West, Dana-Farber/Boston Children’s own treatment wing. The similarities between the Jimmy Fund Clinic and the hospital inpatient area are plenty; there’s a surplus of activities in the craft room, tons of movies to watch or games to play and people to hang out with who understand just how much a simple smile can mean to a child in the hospital.

My treatment had me in the hospital for three days a week for just a little over a year. My birthday fell on a treatment day—cancer doesn’t give you time off for your birthday—so I spent it with my friends at Dana-Farber/Boston Children’s. They held a small party in the activities room for me, some of the patients I was friendly with stopped by and the all nurses came by on their breaks. One of them even played a song for me on his guitar. Honestly, it was one of the better birthdays I’d ever had. It was like I was at home, in the company of friends and family. The fact that I was in a hospital barely crossed my mind. If it wasn’t for the IV in my arm, I probably would have forgotten completely.

When I was getting treatment adults always told me how strong or brave I was. Usually their compliments were met with a blank stare. I was only six at the time, and maybe I didn’t fully grasp the whole situation, but as far as I was concerned cancer wasn’t that bad. In fact I think there were days I almost enjoyed treatment because it meant I got to be around so many nice people. My parents played a big role in fostering that positive outlook. They made sure I didn’t curl up into a ball of depression and hide from the world during treatment, and helped me live as normal a life as possible. And then there were the special benefits: I went to summer camps for kids with cancer where I met some of my best friends. The Red Sox are huge supporters of Dana-Farber/Boston Children’s so I got to go to a lot of games and even got to meet a few players. It really proves that Dana-Farber/Boston Children’s doesn’t just take care of their patients inside the hospital, but outside as well.

After months of treatment it became clear that surgery was my best bet for beating osteosarcoma. I met with Mark Gebhardt, MD, a surgeon at Boston Children’s Orthopedic Center. He explained that because of where the tumor was in my leg I had two surgical options: he could either replace the knee and surrounding bone with a metal duplicate, or perform a rotationplasty, where he’d remove my knee and attach my shinbone and ankle to the thigh bone. In the process of doing that he’d rotate it 180 degrees so the ankle becomes a new “knee,” formed by the rotated ankle and foot. A prosthetic leg and foot would make up the difference in height.

It’s a complicated surgery, but the metal prosthetic option would prevent me from any activity that put large amounts of pressure on the bone, like running. As an active kid the possibility of life without any type of running wasn’t all that appealing, and the rotationplasty would allow me to continue living my life just the way it was, so that’s what I chose. I’ve never once regretted the decsion.

I’m now 17 and living my life just like all my friends. I’ve spent a week in a forest as part of a wilderness survival program, hiked in Haiti and climbed rocks along the beaches in Maine. Cancer treatment can be long and tiring, but it can also remind you of what’s important. As a cancer survivor I feel more alive than ever. Sure, I have challenges like any other teenager, but very little really scares me because I know I have the strength to get through. Maybe that’s the bravery all those adults were talking about when I was younger. If so, I’m proud to say they were right.

Caitlynne talks about her rotationplasty in this video.

Next week, our Faces of Pediatric Cancer series continues with Fernando, a star soccer player whose time away from the field during treatment gave him a new outlook on life.

1 thought on “The Faces of Pediatric Cancer – Caitlynne McGaff”