A diagnosis of ovarian cancer can raise a lot of questions. It can also raise many new medical terms, which your doctor or a member of your care team can explain. Here are a few terms to know.

There are several stages of ovarian cancer, each of which represent how far the cancer has spread. 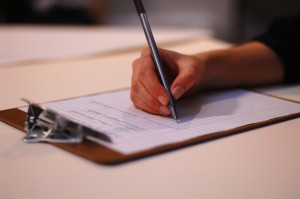 Brachytherapy is a form of radiation treatment in which radioactive material is sealed in needles, seeds, wires, or catheters and placed directly into or near a tumor. Different types of brachytherapy include tandem and ovoid brachytherapy, cylinder brachytherapy, and interstitial brachytherapy. New techniques in the procedure are also being developed, including three-dimensional image-guided brachytherapy.

Watch a detailed explanation of the brachytherapy process.

Many ovarian cancer patients undergo surgery to remove as much of the tumor as possible. An oophorectomy — the surgical removal of one or both ovaries — is one of those surgical options.

Physicians are also exploring new technology for these surgeries, such as robot-assisted hysterectomies.

Ovarian cancer is a hormone-sensitive cancer, meaning that hormones can help fuel the cancer’s growth. Patients with ovarian cancer should avoid highly-concentrated soy foods and flaxseeds, which can have an estrogen-like effect in the body.

The best foods for a cancer diet include fruits and vegetables, lean protein and whole grains. For more healthy food ideas, visit Dana-Farber’s nutrition site, the recipe page or download the Ask the Nutritionist: Recipes for Fighting Cancer iPhone app.

Metastasis refers to the spread of cancer from one part of the body to another. During metastasis, cancer cells break away from the original tumor and may form another tumor elsewhere in the body.