In January 2012, my wife and I had left Boston to spend a few months in sunny Florida. We had just passed Orlando when my cell phone rang. It was my primary care physician calling to tell me she was concerned that my PSA  was elevated to 6, which showed that I did have a problem with my prostate.

This is where it all started.

I settled into sunny Florida and started searching online to become better educated about the prostate. Prior to the PSA test, I had none of the telltale signs of a prostate issue. My primary care doctor advised me to wait until I returned to Boston in the spring and then test my PSA again. 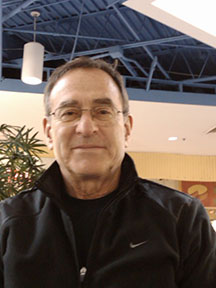 While we were in Florida, I spoke with a friend of mine, who I knew was knowledgeable in this area. I asked her who I should contact if I needed a specialist. She said the only person to see is Dr. Philip Kantoff at Dana-Farber.

When I had another PSA test in April, the level had not changed much. My doctor referred me to a urologist. After the initial consult, he performed a biopsy. A few days later the biopsy results came back, with not very good Gleason scores. By this time I had a better understanding of the Prostate, the tests and some of the procedures. I knew that Gleason scores are the standard measure of prostate cancer’s aggressiveness.

My urologist suggested immediate surgery, then some radiation follow-up if needed. My wife and I were not comfortable with this course of action because we had not yet seen an oncologist.  We made an appointment with Dr. Kantoff, and had the biopsy sent to Dana-Farber, in advance of our appointment.

Our first full day at Dana-Farber was busy. We were treated like royalty from the moment we arrived. It was clear to us that this was standard operating procedure. No matter who the patient was, they were treated with respect.

We met with Dr. Kantoff, who was concerned about the biopsy test results. He immediately prescribed a battery of tests, including an MRI, a bone scan, more blood tests, and I also volunteered blood samples to be used in research studies.  I was followed carefully throughout the test process which took a couple of days. He spent considerable time with us, answering every question, repeating anything we needed to hear. I didn’t know then how much I’d grow to like and respect Dr. Kantoff.

After many emails and phone calls with Dr. Kantoff, I finally decided to do the standard treatment of hormones and radiation. I began taking Casodex pills (hormone), July 1st and a short time later started on the Lupron shot. In September, 2012 , I began radiation therapy under the direction of Dr. Paul Nguyen. After 48 early morning trips for my 15 minutes under the radiation therapy machine, my treatments were finished with no complications.  All during the treatments the staff at Dana-Farber and Brigham and Women’s Hospital were outstanding. This made the unknown much easier to cope with.

Along the way, I joined the fundraising efforts of Movember, designed to raise awareness and money, for prostate cancer research and testicular cancer initiatives. Together with the other members of the Dana-Farber, we formed the BellissiMo team, which was Movember’s top academic institution in the USA. Movember has raised more than $300 million worldwide.

Recently, I had new blood tests, which showed my PSA had dropped to 0.01. If it hadn’t been for the expertise of the people at the Dana-Farber/Brigham and Women’s Cancer Center, especially Dr. Kantoff and Dr. Nguyen, and their efforts to make my visits a welcome one, I do not know where I would be today.

Leonard Ansin is a software developer and prostate cancer survivor. He lives with his wife Jane in the Boston area.