An analysis of data from the decades-long Nurses’ Health Study revealed that women who ate a one-ounce serving of nuts – any kind of nuts – two or more times a week had a 35 percent lower risk of pancreatic cancer than women who abstained from them. That’s a significant and encouraging piece of news for a field that has had far too little. 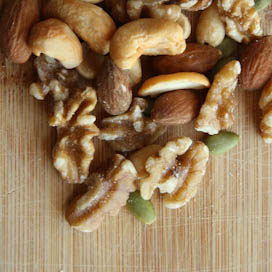 “To date, there have been very few studies showing a dietary intervention for pancreatic cancer prevention – so this is exciting,” says Charles S. Fuchs, MD, MPH, director of Dana-Farber’s Center for Gastrointestinal Oncology. He is senior author of the report published in October in the British Journal of Cancer. The first author is Ying Bao, MD, ScD, of Brigham and Women’s Hospital.

Although the study did not cover different preparations of nuts — such as peanut butter, candy-covered nuts, or cooked versus raw nuts  — the researchers had reason to think that a diet rich in nuts might alter pancreatic cancer risk. Nut consumption is linked to reduced rates of insulin resistance and type 2 diabetes, which are risk factors for cancer of the pancreas. Nuts are a good source of substances such as unsaturated fatty acids, fiber, and magnesium, which can improve insulin sensitivity.

Infographic: Pancreatic Cancer by the Numbers

But the benefits of nut consumption aren’t limited to pancreatic cancer. A second study from the same research group, published in The New England Journal of Medicine on Nov. 20, found that deaths from all causes were 20 percent lower among men and women who consumed one ounce of nuts five or more times a week than those who did not eat nuts.

For those who cannot eat nuts, Fuchs says there are many other dietary and health practices that can offer the same benefits, such as reducing red meat consumption, having a balanced diet, and regular exercise.

A new unrelated study led by A. Lindsay Frazier, MD, of Dana-Farber/Boston Children’s Cancer and Blood Disorders Center suggests that women who eat more peanuts and tree nuts during pregnancy might be less likely to bear nut-allergic children, the Wall Street Journal reports.