When it comes time for x-rays at the dentist, the technician or hygienist always covers the patient with a lead apron before leaving the room. This precaution often sparks the question as to whether the radiation from dental x-rays can increase the risk of cancer. 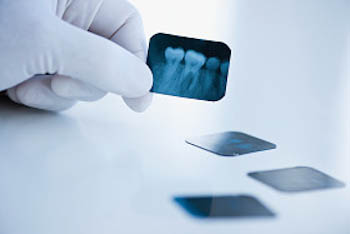 The level of radiation used in a typical dental x-ray is extremely low. A full-mouth series of radiographs – which involves 18 separate pictures of the teeth – exposes an individual to roughly the same radiation risk as a plane passenger would absorb during a cross-country flight. At such levels, radiation is thought to have little or no effect on the risk for cancer.

Some studies have purported to show a link between dental x-rays and thyroid cancer and certain forms of brain cancer such as gliomas and meningiomas, but the results of such studies have been questioned because of a problem known as “recall bias.” Instead of showing a direct, physical connection between x-rays and cancer, these studies have relied on patients’ recollection of how many radiographs they’ve had during their lifetime.

Today, dental patients are exposed to even lower levels of radiation than in the past, as a result of digital x-ray technology, more precise radiation beams, and the addition of collars to x-ray shields placed over patients’ chests. When considering a dental x-ray, it’s important for patients to weigh the potential benefits – early and accurate diagnosis of oral and dental diseases – against the very minimal risks, says Jennifer Frustino, DDS, PhD, an oral medicine expert with Dana-Farber/Brigham and Women’s Cancer Center.