Multiple myeloma is a poster child for recent advances in treatment: In the past decade, the U.S. Food and Drug Administration (FDA) approved no fewer than nine treatments for the blood cancer, and several more drug approvals appear to be near. Not coincidentally, multiple myeloma is also a popular target that researchers use to study the interactions of tumor cells and their “tumor microenvironments” — the non-cancerous cells, molecules and blood vessels that surround and often support the malignant cells.

“These new myeloma drugs are all based on understanding how the tumor cells interact with other cells in their bone marrow environment,” says Kenneth Anderson, MD, director of the Jerome Lipper Multiple Myeloma Center and LeBow Institute for Myeloma Therapeutics at Dana-Farber/Brigham and Women’s Cancer Center (DF/BWCC).

Multiple myeloma begins with mutations in the development of B cells — white blood cells that can turn into plasma cells that normally fight bacteria or viruses. The first clinical sign is a condition called monoclonal gammopathy of undetermined significance (MGUS), with abnormal plasma cells appearing in the bone marrow.

Throughout the course of this disease, the interaction of these mutated plasma cells with their microenvironment is critically important.

Numerous types of nearby cells may be enlisted to aid the tumor, and thus may be targets for new agents. One example is plasmacytoid dendritic cells (pDCs), which normally alert the immune system to respond to a suspicious cell.

“In myeloma these pDCs do not stimulate immune responses as they should, and even worse, they promote tumor cell growth and drug resistance,” says Anderson. “So we are utilizing agents that target these pDC cells as potential myeloma therapies.”

In another project reported in 2014, researchers led by Irene Ghobrial, MD, demonstrated that in mice, an agent that blocked a protein known as stromal cell derived factor-1 (SDF-1), which is present in high levels in areas of the bone marrow with myeloma lesions, slowed the spread of the cancer and improved survival.

With this and many other research projects underway in her lab, “the whole idea is to reverse the way we think – instead of treating patients later on when the disease has progressed, can we change the microenvironment to prevent progression?” Ghobrial emphasizes. “We’re designing trials now to take the best drugs we have and bring them earlier to smoldering disease.

Tumor microenvironments are studied broadly and deeply in other blood cancers, and in many solid tumors as well. “In breast cancer, there’s a lot of data showing that the microenvironment is really important for tumor progression and for therapeutic resistance,” says Kornelia Polyak, MD, PhD, a breast cancer geneticist at DF/BWCC.

In one line of microenvironment research, Polyak’s lab is focusing on the role of fibroblasts from primary breast tumors and metastatic sites such as brain lesions that tend to be particularly resistant to treatment.

Other work examines the role of immune system cells in the progression of ductal carcinoma in situ (DCIS) to invasive breast cancer.

One key theme across cancers is the role of the microenvironment in metastasis, the spreading of cancer to additional parts of the body. For example, tumor cells secrete “exosomes”, tiny packages of protein and RNA that may help to seed metastases. Demonstrated in breast cancer, this phenomenon has been hypothesized to occur in myeloma as well. Another common theme is the hope that drugs targeting the microenvironment may not need to be as selective as targeted drugs that seek out very specific mutations in tumor cells. Since the microenvironmental cells aren’t mutated, each type can be attacked as a population and it can’t develop resistance to drugs.

“If you look at the successful treatments in myeloma, they are not mutation-specific,” Ghobrial points out. For instance, proteasome inhibitors such as Velcade, which block the breakdown of proteins so that cells fill up with molecular garbage and die, “just kill any plasma cell,” she says.

“If you think about treatments for myeloma or breast cancers or other tumors directed against intrinsic abnormalities in the cancer cell, that gives you a number of opportunities,” Anderson sums up. “But if you target the host microenvironment or the interaction of the tumor with the microenvironment, you broadly expand the therapeutic options available.” 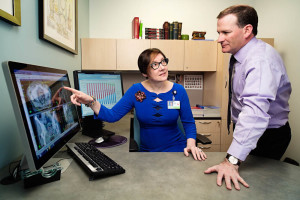