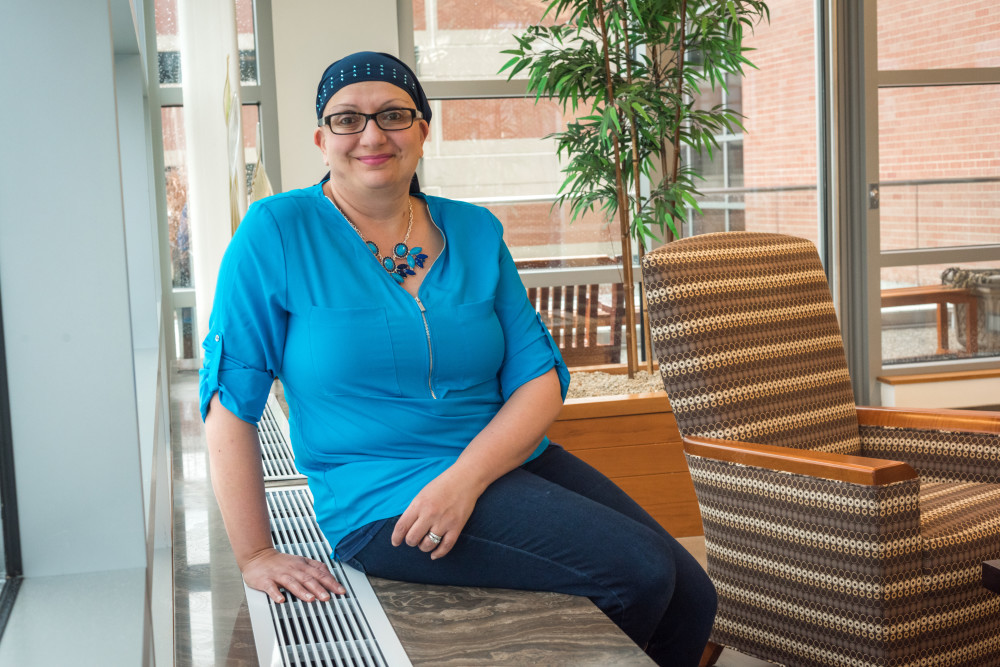 When Cathy McCue, 44, tried to find words to tell her 8-year-old twin boys about her cancer, she turned to books like “Mom Has Cancer” and “Nowhere Hair.”

Her own story began in June 2015, when she felt a pain in her right breast while at the gym. After finding a lump later that night, McCue, a homemaker in Hanover, Mass., went to see her primary care physician, and was guided quickly through detection to diagnosis.

A biopsy revealed that she had triple negative breast cancer, in which the cancer cells do not have estrogen, progesterone, or HER2 receptors, and therefore do not respond to some commonly used breast cancer drugs.

McCue began treatment 20 minutes from home at Dana-Farber/Brigham and Women’s Cancer Center in clinical affiliation with South Shore Hospital. Under the care of Meredith Faggen, MD, medical director of medical oncology, she started a clinical trial that involved giving the chemotherapy drug Taxol for 12 weeks before surgery to shrink the tumor. Faggen stopped the trial at 10 weeks because McCue’s tumor was growing.

McCue had a mastectomy, followed by a combination of two chemotherapy drugs. Then, she began a clinical trial of cisplatin and concurrent radiation therapy for patients with “residual disease following surgery,” Faggen explains. “It’s intended to decrease the risk of local recurrence and make radiation more potent.”

McCue’s case is unusual, because she was able to participate in two clinical trials in the course of her care. “Cathy is enthusiastic about participating in clinical trials, which will improve the care of future generations of patients,” Faggen says. “Because she’s relatively young, she can tolerate very well the treatment we’re giving her. She has soldiered on and remained strong.”

For McCue, who will have reconstructive surgery later this year, there is comfort in receiving care close to home. “I can’t imagine driving into Boston through all of this,” she says, praising everyone from front desk staff to physicians and nurses and staff in the boutique who helped with scarves, prosthetics, and wigs.

Young women like McCue also have access to Young and Strong: A Program for Young Women with Breast Cancer at the Susan F. Smith Center for Women’s Cancers at Dana-Farber. The program was founded in 2005 on the Longwood campus, and in 2014 began expanding to Dana-Farber satellites and affiliates with a grant from the Centers for Disease Control. The program helps young women with breast cancer deal with challenges unique to their time of life.

Like the little girl in Nowhere Hair, who searches the house for her mom’s missing hair, McCue’s sons have learned some very adult lessons: Although their mom is going through cancer treatment, she is still their mother – patient, loving, sometimes tired, and always honest. They know that love is sturdier than cancer and, for McCue, easing their hearts is a gift.