Her voice at first sings softly, then gradually gains intensity and rises to a crescendo as she belts out the refrain of a tune she and her dad co-wrote: “You’re not standing alone!”

15-year-old Carlie Gonzalez has been singing and making music for as long as she can remember. But these days singing has new meaning. After eight months of intensive treatment for Ewing sarcoma, a type of bone cancer, her powerful voice is also a symbol of her physical and emotional strength.

Three weeks after school started in September 2015, Carlie began to feel a pain in her collarbone. Since she also played volleyball, when an X-ray showed nothing, the doctor suggested the pain was likely something minor caused by sport. Carlie’s mom, Julie, wasn’t convinced. They sought a second opinion at another hospital, and this time discovered Carlie had a tumor in her clavicle (collarbone). 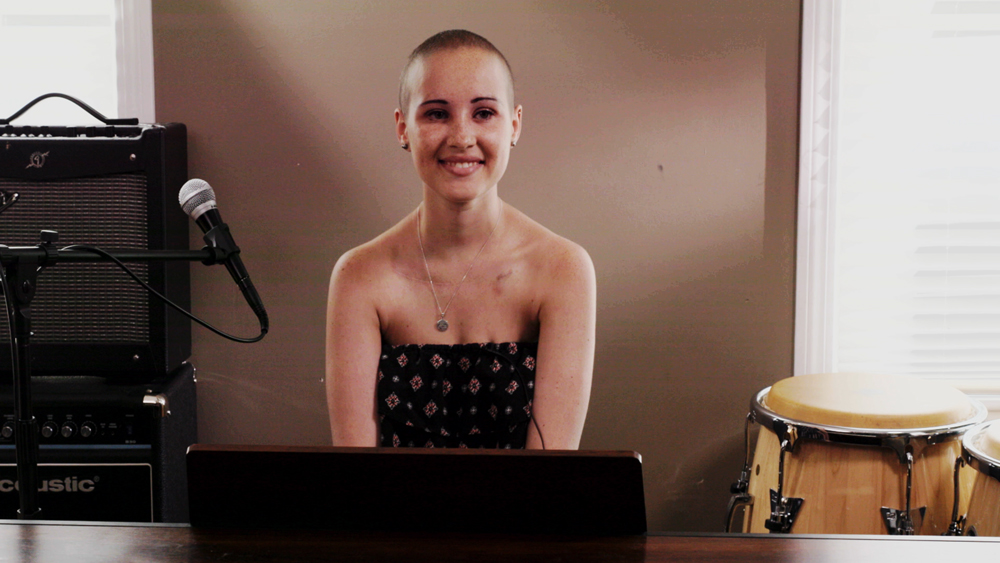 They immediately sought care at Dana-Farber/Boston Children’s. On October 12, Carlie began a grueling chemotherapy regimen – infusions five times a week for a week, followed by a week off – a cycle that continued for eight months. She also had surgery January 8. Finally, on May 21, she received her last chemotherapy infusion.

“I used to sing for literally hours at a time,” notes Carlie. And not quiet tunes either – but truly powerful songs ranging from pop/rock to gospel. “Right now my voice isn’t quite as strong,” Carlie claims. “But it’s coming back.” On this late-July day, her voice sounds remarkably robust.

In fact, throughout treatment, Carlie never stopped singing. She had plenty of tired days, when she couldn’t muster energy to belt out tunes. But on the good days, she’d be back on the keyboard and testing her voice again. And throughout treatment she continued live performances, singing at church, fundraisers and other live events.

Throughout this journey, she hasn’t hidden the visible effects of her treatment. She always bared her bald head proudly. And these days, she often chooses outfits that show off her dual scars – one on her collar bone from the surgery and the other on her upper chest from the port (a central line used for chemotherapy infusions, blood transfusions and more).

Carlie was never too bothered when people gazed at her bald head or scars. And yet, she also always has wanted people to look beyond that – to know that she’s much more than her cancer diagnosis. Here’s what Carlie would like people to see in her: She is a singer and a musician; music is a fundamental part of her life and always will be.

In the video below, watch and listen as Carlie performs “God Bless America” during the 7th inning of a Red Sox game at Fenway Park.


September is Childhood Cancer Awareness Month – and this month, Carlie and other children at Dana-Farber/Boston Children’s are sharing this message: We are more than you see. Don’t focus on the side effects of our treatment – see who we really are. Learn more and see more stories at DanaFarberBostonChildrens.org