Worldwide, more than 700,000 people are diagnosed with liver cancer – a leading cause of cancer death – each year. Does drinking alcohol cause liver cancer?

Although alcohol is a risk factor for liver cancer, it’s not the most common one. Chronic infection with the hepatitis B or C virus is the leading risk factor – though heavy drinking (six or more drinks a day) further boosts the risk in people with these infections. Smokers are also at a higher risk for liver cancer. 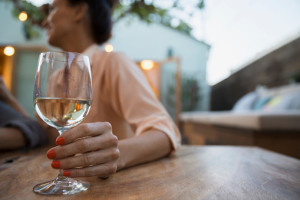 Alcohol itself is directly toxic to liver cells. In addition, alcohol abuse is a major cause of cirrhosis, a gradual form of liver damage in which scar tissue replaces healthy tissue, causing the liver to malfunction. (Chronic hepatitis infection is another cause of cirrhosis.) Cirrhosis from any cause, including alcohol abuse, raises the risk of liver cancer. There is a particularly high risk of cirrhosis when a patient with chronic hepatitis infection also drinks alcohol.

Although deaths from cancer have been declining since the early 1990s, the death rate from liver cancer has been rising since the 1980s – a late effect of the peak incidence of hepatitis C infection in the 1960s, 70s, and 80s caused by contaminated blood transfusions and injected drug use. Since then, improved prevention and treatment of hepatitis C infection has lowered the risk of liver cancer, a trend that should show up in future statistics.

Alcohol use is linked not just to liver cancer, but to a number of other types, including head and neck, esophageal, breast, and colorectal. A study in the American Journal of Public Health concluded that alcohol use accounted for approximately 3.5 percent of all cancer deaths from 2009 to 2010. The risk increased the more a person drank, but the study authors said even low levels of alcohol use were associated with higher-than-average risk. The picture isn’t entirely consistent, though: Studies have found that higher alcohol consumption is associated with a lower risk of two cancers – kidney cancer and Hodgkin lymphoma.

Health experts say efforts to prevent liver cancer should focus on vaccination against the hepatitis B virus, reduction of hepatitis C infection, and avoiding heavy drinking.