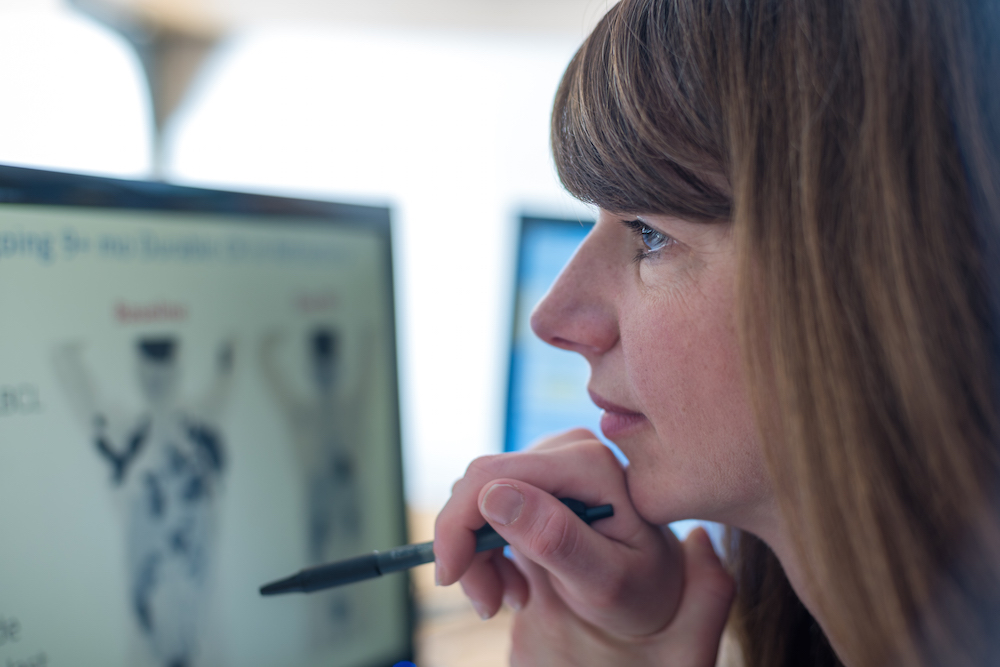 In the high-stakes contest of hide-and-seek between cancer cells and the human immune system, the advantage doesn’t always lie with the body’s defenders. A new approach to treatment, known as CAR T-cell therapy, may shift that balance of power.

Cancer cells conceal themselves from the immune system not by barricading themselves in an impenetrable shell, but by the biological equivalent of hiding in plain sight. Their strategy is to make themselves inconspicuous by blending in, as far as possible, with their normal neighbors. They accomplish this by displaying proteins, known as antigens, on their surface, that are similar to those on the well-behaved cells nearby.

This uniformity can mislead the body’s T cells, the patrol officers and duty inspectors of the immune system. T cells conduct their interrogations of the body’s cells with specialized protein hooks called receptors. The receptors interlock with different types of antigens: If the antigen is normal, the cell is left alone; if it signifies a cancerous or infected cell, the cell is destroyed. The trouble is that T cells may not carry receptors for certain cancer-associated antigens and therefore don’t recognize the cells as cancerous. Such T cells are in the position of a colorblind detective searching for a criminal known to be wearing a red scarf. 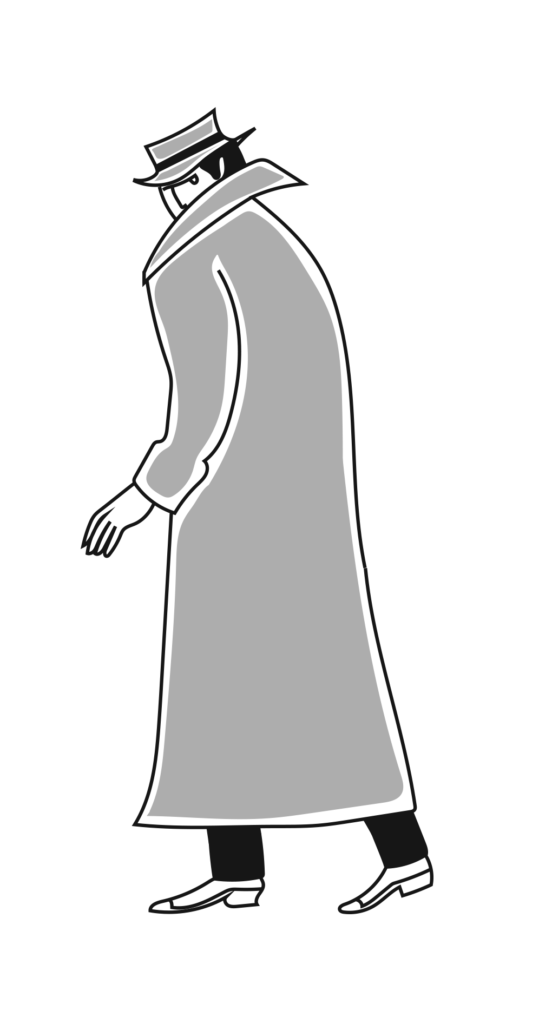 In the late 1980s, an Israeli chemist named Zelig Eshhar saw the potential for a powerful new form of cancer therapy. At first glance, his approach seems almost too contrived and ungainly to work. What if it were possible, Eshhar wondered, to equip T cells with a receptor for a specific antigen found on certain types of cancer cells? In theory, the newly accessorized T cells would recognize the cancer cells, snag them with the receptor, and initiate their destruction. The concocted cells were dubbed chimeric antigen receptor (CAR) T cells. (“Chimeric” derives from “chimera,” a Greek mythological monster with a lion’s head, goat’s body, and serpent’s tale. Like the chimera of old, the CARs on T cells are composites of elements not found together in nature.)

To build a CAR, researchers glean materials from the immune system. The “hook,” or receptor, is an antibody that homes in on diseased cells such as cancer cells. Other components include a protein that puts the T cell in killing mode, and one that keeps it in that mode.

“CAR T cells are, in a real sense, a ‘living drug,’ a treatment created by enhancing a patient’s own immune system cells,” says Sarah Nikiforow, MD, PhD, a physician in Dana-Farber’s Adult Stem Cell Transplantation Program and assistant medical director of the Institute’s Connell and O’Reilly Families Cell Manipulation Core Facility, which makes CAR T cells. “When they’re infused in a patient, they reproduce dramatically and instigate a ferocious attack on tumor cells. They’re one form, maybe the most high-profile form, of a new generation of engineered cell therapies, in which cells are altered to generate a more potent immune response to cancer.”

Clinical trials of the latest generation of CARs began in earnest in 2015, primarily in patients with B cell malignancies such as acute lymphoblastic leukemia (ALL) and non-Hodgkin lymphoma (NHL). Even in a field as replete with breathtaking results as cancer immunotherapy has been in recent years, the results of these trials have stood out – for physicians, patients, and researchers alike.

Example: A phase 1 trial of CAR T cells in patients with relapsed B-cell ALL that hadn’t responded to other therapies. Traditionally, further treatment would control the disease in only about 10-20 percent of such patients. In this trial, 82 percent of the participants had a complete response – tumor cells were no longer detectable in their blood, bone marrow, or in body scans. The CARs were fast: the median time that it took to produce a complete response was three weeks. Some patients experienced such a response within eight days.

Another example: In two trials involving patients with NHL who had relapsed after undergoing stem cell transplants, 82 and 97 percent of the participants, respectively, had a clinical response to CAR T-cell therapy, meaning at least some decrease in tumor burden. The historical response rate for patients in this situation is about 26 percent.

In two trials, 82 and 97 percent of the participants, respectively, had a clinical response to CAR T-cell therapy.

It’s too early to know how lasting these remissions will be. Cancer cells are notorious camouflage artists; they may find ways to shed the antigens that CARs recognize, rendering themselves invisible to the immune system. To date, however, CAR therapies are showing strong signs of durability.

From the earliest reports of the success of CAR T-cell therapies, Dana-Farber investigators have sought to make them available to Institute patients in clinical trials.

“As an academic community, we could see how promising these therapies would be,” Nikiforow says. “It was clear that the early stage trials opened by several research centers in 2015 would quickly expand to include other institutions. We wanted to be able to offer these cutting-edge therapies to our patients.”

Today, Dana-Farber and its clinical partners, Boston Chilren’s Hospital and Brigham and Women’s Hospital, have joined in eight trials of CAR T-cell therapy, including one trial for pediatric patients. The trials are open to patients with certain types of ALL, NHL, acute myelogenous leukemia, or multiple myeloma, who have relapsed after previous treatment – often, several previous treatments. More than 30 patients have participated in them so far.

CAR T-cell therapy begins with the collection of thousands of a patient’s T cells. From a needle in the patient’s arm, blood flows through a tube to an apheresis machine that separates out immune system cells and returns the rest to the other arm. The collected cells are then sent to a lab, such as the Connell and O’Reilly Families Cell Manipulation Core Facility or a commercial facility, where they’re expanded and engineered to express the new receptor. The engineering involves a deft bit of gene therapy: a virus carrying a particular trio of genes is allowed to infect the cells. The virus, essentially a molecular delivery van incapable of replicating, releases the genes, which are then sewn into the cells’ genome. Ensconced in the cells’ basic operating system, the genes direct the assembly of the three-part CAR to the cells’ surface.

The process of engineering and growing sufficient quantities of CAR T cells can take a few weeks. In the meantime, patients may receive chemotherapy for their cancer. When the CARs are ready, they’re reinfused into patients in a process similar to a blood transfusion. 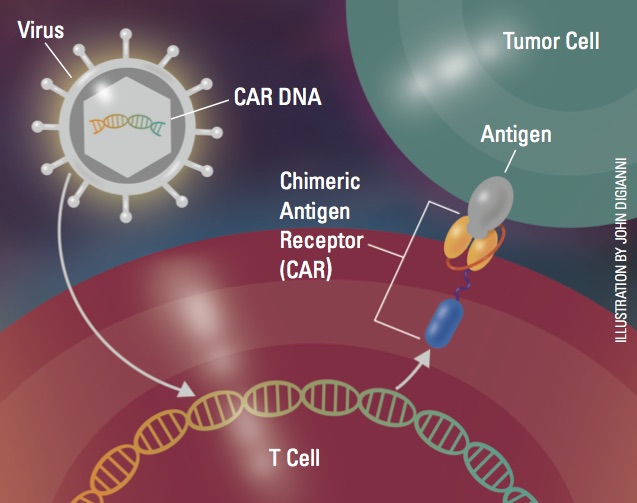 The biggest challenge for patients, and for those charged with their care, comes after the infusion. Effective CAR T cells typically multiply profusely and besiege cancer cells throughout the body. A single CAR T cell can annihilate 100,000 cancer cells. And CAR T cells don’t work alone – they initiate a massive release of proteins called cytokines, which whistle to other elements of the immune system to come join the attack. The resulting onslaught can trigger in inflammatory condition known as cytokine-release syndrome – more evocatively dubbed a cytokine storm – an array of complications that includes dangerously high fevers, extreme fatigue, difficulty breathing, and a sharp drop in blood pressure. The condition tends to be particularly severe in patients with extensive cancers.

“Cytokine release syndrome tends to arise within one to five days of infusion,” says Dana-Farber’s Caron Jacobson, MD, who is leading the Institute’s participation in several clinical trials of CAR T-cell therapy for patients with treatment-resistant large B-cell lymphomas. “We have medications that in most cases can treat these symptoms effectively. They usually abate in about five days.”

In a set of trials involving patients with lymphoma, the ebbing of the cytokine storm has often been a prelude to a second wave of complications that affect the nervous system. “These patients have often experienced memory loss and difficulty understanding language and speaking,” Jacobson relates, noting that this period can be particularly difficult on patients’ families. The cognitive problems have so far proved impervious to drug treatment, but tend to last just a few days, although they sometimes last for weeks. “At the time of infusion, patients are generally admitted to the hospital for a minimum of seven days, and remain hospitalized until the symptoms abate, which usually takes about two weeks,” Jacobson says.

Because of the potential for complications, the severity and breadth of those complications, and the fact that they aren’t always predictable and may arise after hospital discharge, caring for patients receiving CAR T-cell therapy poses enormous logistical, communication, and coordination challenges for caregivers. At Dana-Farber, clinicians have built an extensive infrastructure to ensure the therapy is delivered safely.

“CAR T cells and other engineered cellular therapies are some of the highest potential benefit/highest potential risk treatments that we have for cancer,” Nikiforow states. “We’ve brought together clinicians and staff from an array of areas – physicians, nurses, the pharmacy department, information technology, and others – to create a system that’s efficient and provides for a rapid response when complications arise. It has involved educating physicians about cellular therapies and cell-collection processes, establishing direct lines of communication between caregivers and the principal investigators of CAR T trials, and developing guidelines and pathways for treating specific complications. We consult regularly with the leaders of CAR T-cell therapy trials at other institutions to share information, including details of any new complications and how to respond to them.”

Reassured by these arrangements, patients have been undaunted about enrolling in clinical trials of CAR T-cell therapies, and unfazed by the science fiction-sounding process of retrofitting T cells with genes intended to make them better cancer fighters. In part, this is because patients eligible for the trials have few remaining treatment alternatives, and because they’ve educated themselves about the promise and risks of CAR T-cell therapy.

“Patients eligible for these trials have advanced disease that has relapsed after previous treatment, often several previous treatments,” says Dana-Farber’s Daniel Deangelo, MD, PhD, who is leading the Institute’s involvement in two trials of CAR T cells for a form of B-cell leukemia. “They’re excited by the results they’ve read about, particularly in pediatric patients, and are eager to participate in a trial. We’re glad to be able to provide options where there otherwise might be none.”

Although the initial clinical trials of CAR T-cell therapies involved B-cell cancers, other engineered T-cell trials are rapidly opening for patients with certain kinds of solid tumors, including sarcomas. The challenge is to identify antigens unique to specific types of tumor cells, then to construct CARs or other T-cell receptors that target them. “Basically, any antigen that we can generate an antibody to, we can also make a CAR T cell against,” Nikiforow says. “There are many years of trials to come.”