On a hot, August day in a Boston park, Jesus Apolinaris Cruz cooled off with a water squirt gun fight with his mother and sister. As he nimbly ran and dodged their aim, he twisted around to sneak shots of water back in their direction.  Peals of laughter rang out from the group as Jesus landed a jet of water on his sister. 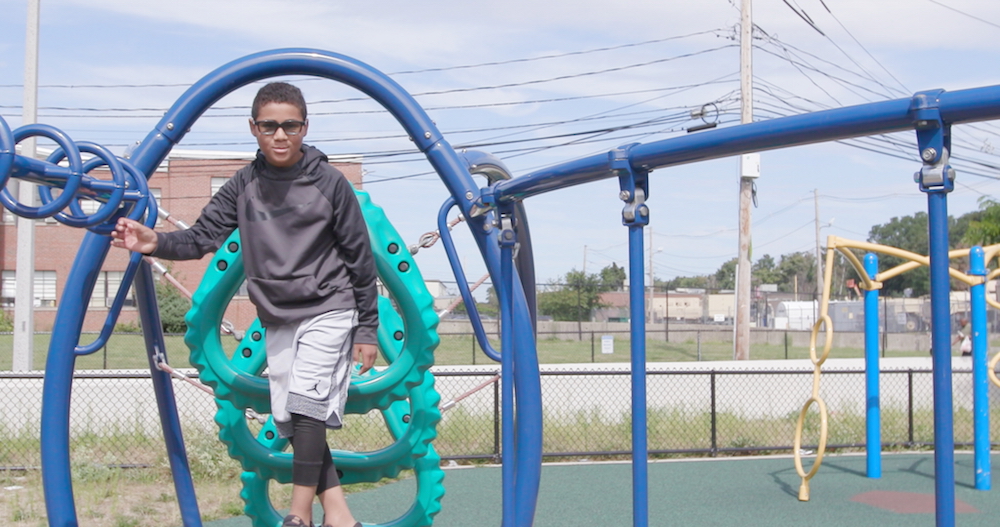 It’s hard to imagine that just weeks earlier, Jesus, 13, had undergone surgery near his hip to remove an unclassified tumor, so-described because it couldn’t be categorized as any specific kind of cancer.

“We had been praying for months that the surgery would go well,” says Maria, Jesus’ mother. The family had uprooted themselves, moving to Boston from Puerto Rico, to get the right care for Jesus’ tumor.

The successful surgery was only possible because a coordinated team of clinicians and researchers at Dana-Farber/Boston Children’s Cancer and Blood Disorders Center made a match between the genetic profile of Jesus’ tumor and an experimental drug, which could turn off the specific genetic variation that was spurring the tumor’s growth.

“Before treatment with the experimental drug, which targets a genetic abnormality called a TRK gene fusion, Jesus’ tumor was about the size of a large grapefruit,” says Dr. Katherine Janeway, pediatric oncologist and clinical director of the Solid Tumor Center at Dana-Farber/Boston Children’s.

When he arrived at Dana-Farber/Boston Children’s last year, Jesus’ tumor had been lodged deep in his abdomen, encompassing the top of his hip bone and encroaching on his vital organs, pushing them aside in his abdominal cavity.

“It was huge,” Janeway says.

At that size, Jesus’ care team concluded, surgery to remove the tumor would jeopardize his ability to walk and risk damage to surrounding organs.

Without knowing its specific tumor type, the Dana-Farber/Boston Children’s team turned to genome sequencing — analyzing the complete sequence of Jesus’ DNA — to cast a wide net in their search for any genetic markers that might reveal a therapeutic vulnerability in the tumor. Sure enough, after identifying the TRK fusion through sequencing, Jesus’ tumor quickly responded to treatment with Loxo Oncology’s TRK fusion inhibitor, larotrectinib.

“We were really pleased that our Experimental Therapeutics Program had the right drug for Jesus,” says Dr. Steven DuBois, who is director of the program. “We conduct a large number of clinical trials for new cancer drugs that work by targeting the proteins involved in cancer. In Jesus’ case, we had the right drug to block the protein that was driving the growth of his tumor.”

Between November 2016 and July 2017, Jesus’ tumor shrank down to the size of a deflated lemon, earning him the green light for surgery to remove it.

Making a Complete Rebound After Treatment

When the surgical team finally did remove the tumor in July, they happily discovered that it had more than just shrunk — the cancerous cells had completely died under the influence of larotrectinib.

“We couldn’t find any living tumor cells under a microscope,” says Janeway. “As we had hoped, larotrectinib stopped it dead in its tracks.”

Because of its greatly-reduced size, the surgery was drastically less invasive than it would have been otherwise.

“The surgery that had originally discussed early on, before larotrectinib, was completely different than the surgery that actually happened,” says Janeway.

Jesus’ surgery went so well that, after five days of recovery, he was back home and soon up on his feet.

“He was walking around right away!” says Maria. “We’re so glad we decided to do the experimental therapy — I can’t imagine how different life would be right now if we hadn’t.”

Now, Jesus, who enjoys playing soccer and video games with his older siblings, is enjoying his freshman year of high school with a clean bill of health. The Dana-Farber/Boston Children’s team will check up on him every few months for the next couple of years to monitor his health and make sure the tumor doesn’t regrow.

But Janeway and DuBois are encouraged by the fact that larotrectinib worked so efficiently against Jesus’ genetic abnormality.

“Jesus is truly one of a kind,” Janeway says with a smile. “The ability to tailor treatment plans based on an individual’s genomic profile is what makes these new sequencing technologies so powerful.”