It’s not uncommon for cancer patients to take to a pen after a diagnosis. Peter Rooney’s taken that to another level. Rooney, a former journalist and author of the book Die Free, captured his cancer journey in the new book Immunopatient: The New Frontier of Curing Cancer. The following excerpt is reprinted with permission from Immunopatient by Peter Rooney (Hatherleigh Press, 2017). Available at Amazon.com, wherever books are sold, and at immunopatient.com.

I did the best I could to take Dr. Mier at his word—he would know better than me, after all—but a question kept nagging at me. A question whose answer would have much further-reaching effects on my life and my treatment than I would have ever imagined.

Does my immune system work in the brain the same way it works in the rest of my body?

Dr. Mier said that, while he didn’t know the answer to that question, he was inclined to think it didn’t.

“I’ve always been a little doubtful,” he explained. “If the immune system could get into the brain that easily, we’d all have MS by now. But you shouldn’t be discouraged. The good news is there’s no evidence of cancer in the rest of yourbody,which could very well mean there aren’t any cancer cells to travel to thebrain and seed more tumors.”

My reaction was, as you might expect, less than thrilled. “Cancer-free from the neck down is great and all,” I said, “but I was hoping the news would be even better.”

“If you had to pick one person to thank for this,” Dr. Mier remarked while reviewing the test results with me, “it would have to be Gordon Freeman at [Dana-Farber].”

“I  wouldn’t be so quick to assume that the news won’t be as good as all that in the future,” Dr. Mier replied. “Remember, these small brain tumors are very receptive to radiation, and there may very well be an immune response. We  just don’t know yet.”

I paused to think for a moment before asking, “Do you think Gordon Freeman would know?”

Dr. Mier paused as well before cautiously saying, “He might. If anybody would know, he would.”

I’d first heard the name “Gordon Freeman” about a year earlier, while basking in the afterglow of a clean scan report.

“If you had to pick one person to thank for this,” Dr. Mier remarked while reviewing the test results with me, “it would have to be Gordon Freeman at the Farber.”

The poet Emily Dickinson calls hope “the thing with feathers,” perhaps because the feeling itself can be so light and fleeting.

I was becoming increasingly worried by the information Iwas finding online about my prospective treatment  options.  What I read suggested that the various types of white blood cells that constitute the body’s immune system don’t easily pass through the blood-brain barrier.

I was quietly beginning to panic. Throughout my cancer treatments, one of the foundations of healing—for me, at least—was positive visualization. Picturing my body’s white blood cells actively hunting down and killing cancer cells had become a vital mental exercise for me, one that helped me follow the concrete, scientifically-established path to remission and restored health. But that sense of focus and momentum was in danger of becoming unpinned as I pictured an impermeable locked gate somewhere at the base of my skull, keeping out a teeming swarm of frustrated T cells.

I was counting on Freeman to help me erase that scenario and replace it with a more hopeful image—ideally one that featured marauding T cells and melting cancer cells. Maybe he could offer some encouraging insights about how the immune system works in the brain and how it shrinks brain tumors like mine.

Postscript from the author: 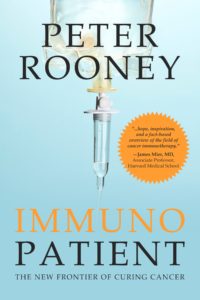 It’s been almost seven years since I was first diagnosed with Stage IV kidney cancer, and almost five years since I began a clinical trial that combined two immunotherapy agents. There have been setbacks, but I continue to hold cancer at bay, through strategies I discuss in my book that include traditional medicine along with exercise, good nutrition, mindfulness meditation and a spirit of acceptance, but not resignation. I have a lot to live for and I’m thankful to be around at a time when there are so many exciting developments in the care and treatment of cancer patients.