How do you repay someone who has given you the gift of life? Eight-year-old Emma Duffin of Enfield, Connecticut, started by giving a kiss and cuddle to her brother, Alexander, who donated his bone marrow stem cells to Emma to reboot her immune system and send her rare form of leukemia into remission.

Emma’s journey to a stem cell transplant began in April 2014, when her usual energetic demeanor began to change. “Emma was very vibrant, very active, and she did not like to rest,” says her father, Brian Duffin. But suddenly his go-go daughter was exhausted all the time. She was diagnosed with strep throat, then foot-and-mouth disease, but neither medication nor time brought any improvement.

During yet another trip to the emergency room, a blood draw revealed Emma had an alarmingly low level of hemoglobin – a 3 instead of the normal range for a juvenile of 11 or higher.

“For an adult, such low levels would have been fatal,” Brian says. Emma was rushed to Connecticut Children’s Medical Center (CCMC), where she was diagnosed a few days later with acute undifferentiated leukemia.

Most leukemias fall into two types: acute lymphocytic leukemia (ALL) or acute myeloid leukemia (AML). Each type is treated with a distinct protocol. Acute undifferentiated leukemia is a subset of the disease that shows markers of both types.

“As a result, part of the leukemia is often resistant to one protocol or the other,” explains Steven Margossian, MD, PhD, a senior physician of pediatric hematology and oncology at Dana-Farber/Boston Children’s Cancer and Blood Disorders Center. “In this circumstance, the best approach is often a bone marrow stem cell transplant. The bone marrow is the factory where leukemia cells are made. By using strong chemotherapy to destroy the existing bone marrow cells, you can then replace those with normal, healthy cells from a donor as closely matched to the patient as possible.”

In Emma’s case, Alexander ended up being her perfect match.

Emma’s oncologist at CCMC trained under Dr. Margossian and referred the family to her mentor.

“When your doctor tells you the number one pediatric stem cell transplant hospital in the world is only 90 minutes from your house, you don’t question it,” says Allyson Duffin, Emma’s mom.

After Emma completed three rounds of chemotherapy at CCMC, the Duffin family traveled to Boston to prepare for “zero day”: the day Dr. Margossian would perform the stem cell transplant. Prior to the transplant, Emma had one last round of high-dose chemotherapy and radiation – a typical pre-transplant treatment called conditioning therapy – to wipe out any remaining malignant stem cells. Then, on zero day, Margossian’s team harvested and processed Alexander’s stem cells and prepared Emma for the infusion. Brian had the privilege of pushing the button that began the infusion, transferring this gift of life from his son to his daughter.

Emma remained at Boston Children’s Hospital for about a month until engraftment, or the point at which the new stem cells produce enough neutrophils, a specific kind of white blood cell, to provide protection against bacterial infection.

“She was still energetic during that time; she has a zest for life that is unquestionable,” Brian says.

On Halloween, Emma dressed as Elsa and enjoyed “reverse trick-or-treating,” as doctors and nurses brought candy to her on their rounds.

Still, the month of recovery had its challenges. The conditioning therapy often causes the onset of mucositis, an extremely painful inflammation of the mucous membranes that line the digestive tract. Emma’s case was especially severe; she had to be fed through a nasal tube.

“For 95 percent of stem cell patients, the pain of mucositis is what they remember the most about their transplant,” Margossian says.

Emma also endured graft-versus-host disease (GVHD), another expected side effect of a stem cell transplant in which the donor’s white blood cells (the “graft”) attack the host’s cells, which can cause skin rashes and irritate the digestive system and liver.

“Emma’s nurses were very proactive about it,” Allyson says. “They gave her Benadryl and used every lotion known to man to soothe her skin.”

After Emma was released from the hospital, she remained in quarantine at home for nine months, allowing her fragile immune system to gradually rebuild itself without unnecessary exposure to germs in indoor public places. She entertained plenty of visitors on her front porch, relished rides around town with her family, and enjoyed the occasional meal on the outside patio at her favorite restaurant.

When Emma’s quarantine restrictions were lifted on June 1, 2015, “she celebrated by doing anything and everything,” Brian says with a laugh. “She shopped, she visited friends, she ate inside at her favorite restaurant – and she was excited to go back to school.” 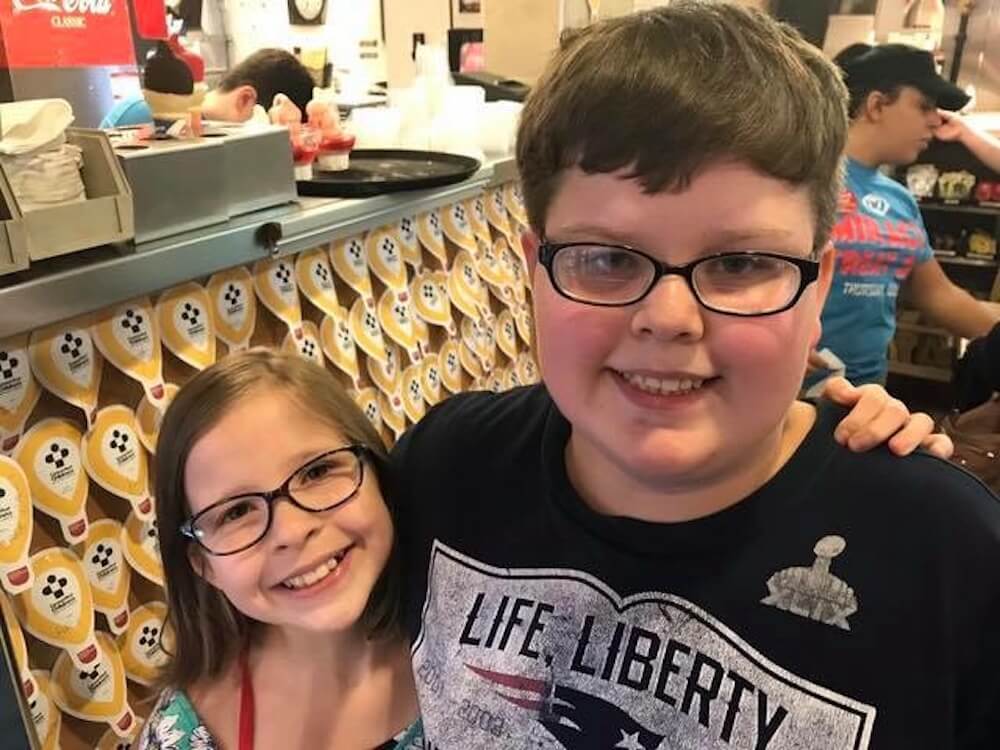 Today, Emma remains healthy. “You would never know she had been so sick,” Allyson says. Now 11, Emma is in a dance troupe and involved in acting. She plays trumpet in her school band. And yes, she and Alexander are back to the usual sibling antics.

“Kids often bounce back more easily, physically and psychologically, because they are more resilient,” Margossian said. “Emma is spunky, and her energetic attitude went a long way in positively influencing her recovery.”

Learn more about treatment for children with leukemia from Dana-Farber/Boston Children’s Cancer and Blood Disorders Center.