Before Oct. 31, 2012, I would have probably guessed that desensitization was a process invented by mental health professionals to make really sensitive people less sensitive. I might have inquired about the cost to put my four-year-old son through “desensitization” so that he wouldn’t throw such a fit when he lost a game of knee hockey in our basement.

Now I know that desensitization is a life-saving process necessary to treat cancer patients like me.

On August 8, 2012, I was diagnosed with breast cancer.  I was 32, had no family history of cancer, no other health issues, and no warning except for the lump I felt in my left breast the week prior. I was shocked, crushed, and scared to the point that I could barely eat (and I like to eat).  One month later, I underwent a successful double mastectomy with reconstruction, and by October, I was ready – even eager – to begin chemotherapy. 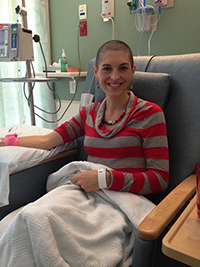 My first infusion was great. I had three weeks before my next round of chemo and although those three weeks included some of the typical (and totally un-fun) side effects of chemo, it actually wasn’t as bad as I thought it could be.

On October 31, I took my mounting confidence with me to my second round of chemo. Since it was Halloween, I was even festive in my orange striped shirt, black tights, and wacky beaded Halloween necklace that my son made me.

My Herceptin infusion went just fine. However, a few drops into my Taxotere infusion, Boom … or maybe more like…Crash. It wasn’t pretty.

When I first felt the intense heat in my chest, I knew something was very wrong. Granted, I’m generally one of those my-headache-must-be-a-brain-tumor types, but this, well, I knew this was serious. It turns out that I was right, and that anaphylactic shock is not a fun way to celebrate Halloween. Groundhog Day, maybe, but not Halloween.

As soon as I fell into shock, a team of angels descended from above, or from some other place at Dana-Farber. They stabilized me but once I realized I was going to survive, one intense fear was replaced by another one: how would my medical team get those life-saving drugs into my system?

That night, I went trick-or-treating with my son and one-year-old daughter, watching them skip up to our neighbors’ houses in their pirate costumes. And I breathed fresh, clean air, never so appreciative of my ability to do so.

For the next two weeks, I did one of the toughest things to do in a battle with cancer – I waited. I waited for the allergist to decide if it was safe for me to receive my chemotherapy regimen through the desensitization (or “desens”) process. It was.

Desens patients typically receive a protocol of drugs to prepare their bodies for the drug that was otherwise unfriendly to their system. Once the body is made stronger, the pesky drug is infused at such a slow pace that the body is essentially tricked into accepting it. For me, an infusion that should have taken one hour took upwards of seven hours. Added to the other drugs I received, the entire infusion took a full day. At the end of that day, I felt great victory and great appreciation for the Desensitization clinic at Dana-Farber and the medical team that I will always credit for saving my life.

I had never been allergic to anything before. I won’t lie, at first I was so terrified that I was deathly allergic to a drug that was supposed to save my life. But I was equally as relieved to learn that Dana-Farber had a way to solve this problem. In fact, they had an entire department devoted to it.

I successfully completed the remainder of my chemotherapy through the desens process and now, just over two months after my last chemo treatment, I feel absolutely great. I continue to visit Dana-Farber every three weeks for my Herceptin infusions. Those infusions last only 30 minutes. Which brings me to one enormous benefit of desens (besides the whole life-saving part). Once I endured up to ten hours of chemo infusions, 30 minutes seems like a drive-by.  It’s kind of like swinging one bat right after swinging twenty.

Tara Shuman is a 33-year-old lawyer, wife, mother of two, and a breast cancer patient. She blogs about her experience at www.tarabeatscancer.com.

7 thoughts on “What Happens If You’re Allergic to Your Chemo Drugs?”