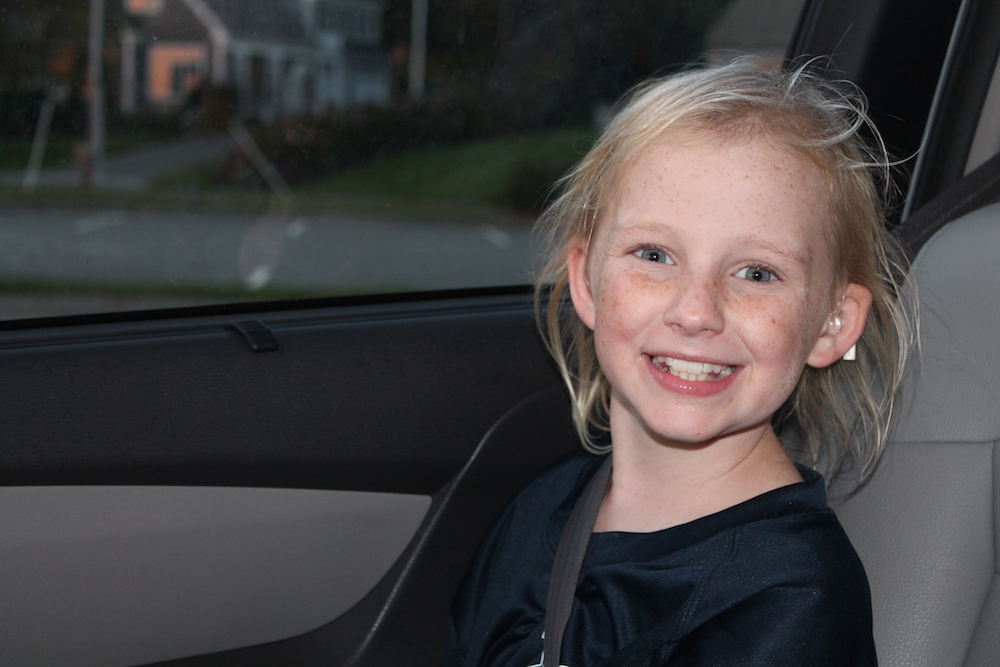 When Emily Coughlin complained of a sore knee in May 2009, doctors initially suspected Lyme disease. After antibiotics failed to relieve the pain, the girl, who was just shy of her fourth birthday, was diagnosed with neuroblastoma, a cancer that begins in nerve cells outside the brain and usually affects children under 6. Though rare – about 700 new cases annually in the United States – it is the most common cancer in infants and toddlers.

Instead, Emily – who loves drawing, soccer, and her family’s golden doodle dogs named Obi and Agnes — withstood the newer but extremely rigorous treatments that spell hope for today’s neuroblastoma patients. She has been cancer free since 2010, and recently celebrated her 11th birthday with a trip to the pool with friends, followed by pizza and cake at her Cape Cod home. “I don’t really think about it,” she says.

In 2009, Emily participated in a randomized, multi-center phase 3 trial that involved chemotherapy followed by back-to-back stem cell transplants. The transplants utilized Emily’s own previously harvested blood stem cells to enable her to tolerate the extremely high doses of chemotherapy needed to destroy her cancer. The recently announced results of this trial, co-led by Diller, herald a new standard of care for high-risk neuroblastoma, establishing that two transplants yield significantly better outcomes than the previous standard of a single transplant. Emily also benefited from the immunotherapy drug dinutuximab approved last year by the Food and Drug Administration, its first approval of a medication for high-risk neuroblastoma.

The road to improved outcomes began three decades ago, when researchers noticed that higher doses of chemotherapy killed neuroblastoma cells in a laboratory dish, while lower doses were ineffective. The only way to deliver such high-dose chemotherapy at the time was via bone marrow transplant, in which the patient’s bone marrow cells are harvested for safekeeping and returned to the body after intensive chemotherapy that would have destroyed the marrow.

In the early 1990s, clinicians began harvesting blood stem cells, instead of bone marrow, for transplants in adults. Scientists wondered if this technology could be used in young children and infants, given the technological difficulties of catheters and collection machines, and the challenge of keeping a young child still for the hours needed for collection. Convinced the problems could be surmounted, Diller and her colleagues developed the technology to safely harvest young children’s stem cells.

“Then,” Diller recalls, “we began to think, if one transplant is good, maybe two are better.”

Armed with the stem-cell collection technique, Dana-Farber/Boston Children’s pioneered tandem transplants for neuroblastoma, beginning in 1994. In 2007, the Children’s Oncology Group opened the randomized trial to definitively determine the relative efficacy of two transplants versus one. The trial enrolled 652 patients newly diagnosed with high-risk neuroblastoma, most with stage IV (metastatic) disease. Their median age at diagnosis was 3.1 years. All were initially treated with surgery and six cycles of high-dose chemotherapy, with stem cells harvested for transplant after two rounds.

The results were striking. Three years after treatment, 62 percent who received two transplants were alive and cancer-free, compared to 49 percent of those who underwent a single transplant, according to findings Diller and Julie R. Park, MD, of Seattle Children’s Hospital, recently presented to the American Society of Clinical Oncology. Children who also received immunotherapy after transplant, as part of a second, linked study, fared even better, with 74 percent of tandem transplant patients and 56 percent of single transplant patients alive and cancer-free three years after treatment.

“The findings define a new standard for treatment,” Diller says.

For Emily Coughlin’s parents, the decision to participate in the trial was challenging. “There was the possibility of subjecting her to a second transplant, and the transplants were only two weeks apart,” says Amy McHugh, Emily’s mother.

Emily had six rounds of chemotherapy to reduce the softball-sized tumor, which shrunk to the size of a golf ball, followed by an eight-hour surgery to remove it. Next came back-to-back transplants, followed by 21 treatments with radiation and six months of antibody immunotherapy.

“Everybody is affected,” says McHugh. “Our other daughter was in first grade. My husband and I switched between hospital and home and didn’t see each other for 18 months. It was hard, but when you have to do something you just do it.”

The double transplant, as expected, was difficult. “Emily was in the intensive care unit twice during the first one,” McHugh recalls. “It was awful to have the intense experience of the first one and know she was going to go through it again. Luckily, the second one was a little easier for her.”

As much as Emily has put her experience with cancer behind her, she lives with some of the consequences of the cure that saved her.

“Emily is great,” McHugh says. “The protocol was so intense that many kids have issues. Emily has 25 percent of her kidneys and uses hearing aids because she lost 65 percent of her hearing. She has stunted growth, endocrine issues, and sparse hair. But academically she does really well. She plays sports and has good friends. She has some collateral damage, physically, but her quality of life is really, really high.”

Only one of the children Diller treated for high-risk neuroblastoma in her early days as a pediatric oncologist survived his cancer. Today, the Dana-Farber/Boston Children’s survivorship program cares for dozens of long-term survivors of the disease.

“As encouraging these new tools are, the fact remains that we are treating some of our youngest patients with the most toxic therapies in our arsenal,” Diller says. “While we continue to strive to improve survival, we must also seek ways to reduce the toxicity of our treatments.”