More than 50 feet above ground, a wire rope extends from one tree to another. High in the trees, seven-year-old Carter Mock fearlessly steps off a platform and places first one foot, then the other, onto the wire. Holding tight to hanging ropes for balance, he navigates across the wire to the next tree.

It’s an impressive feat for anyone, but for Carter it’s extra special. Just weeks earlier, he completed treatment for osteosarcoma (a bone cancer), and he now has a prosthetic bottom left leg and foot.

Carter says navigating the wire rope is tricky, because he can’t feel the pressure of the rope below his prosthetic leg as distinctly as he can with his other leg. But that doesn’t deter him. On this warm August day, he expertly completes all four levels of an aerial rope course at Mount Sunapee in New Hampshire with remarkable speed and agility.

Two weeks after school had started in fall 2015, Carter started to complain of a strange knee pain, and he developed a slight limp. After a whirlwind of subsequent doctor visits – and an X-ray, MRI and then biopsy – his family received his diagnosis: osteosarcoma. 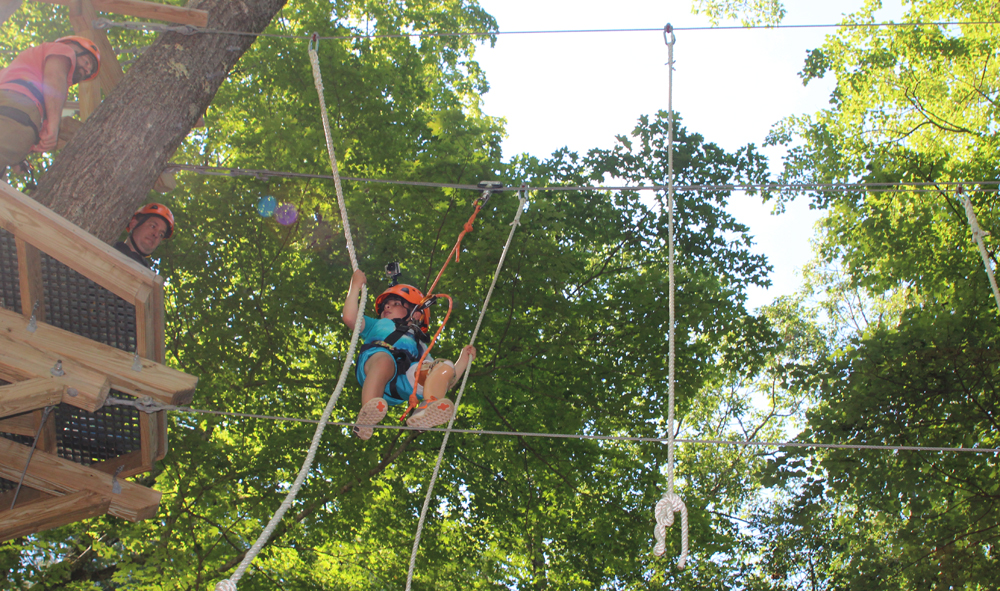 Carter would need months of treatment, including chemotherapy and surgery. He had two options for surgery. One was rotationplasty, a unique procedure that would provide Carter similar mobility as a below-the-knee amputation. Rotationplasty preserves the lower leg, attaches it to the thighbone, then uses the ankle as a knee joint. After surgery, he’d be fitted with a specialized prosthetic leg in which his backwards foot would fit into a socket and his ankle would act as his knee. Once healed, he could resume all types of physical activity again, even high-impact sports.

Another option was limb-sparing surgery, which would maintain the normal appearance of the leg. But the leg would never have the strength it had before, and Carter wouldn’t be able to ski, skate, or run again.

It was an easy choice for Carter. He had no plans to give up skiing, skating, baseball or activities like the aerial course challenge – so he chose rotationplasty. After interviewing many surgeons at many cancer centers, Carter’s parents chose Dana-Farber/Boston Children’s. They were impressed by surgeon Dr. Mark Gebhardt’s experience – and even more convinced when another rotationplasty surgeon told them outright: If it were my child, I’d go to Dr. Gebhardt.

Carter received his first of many ongoing chemotherapy infusions in October 2015. His surgery was in January, and physical therapy started just days later. In April, he received his prosthesis. In June, he had his final chemotherapy infusion, and his doctors cleared him to resume medium-impact activities, including the aerial rope course. He hopes to get full clearance for all sports – including skiing and hockey – in January.

Sometimes, Carter notices people stare at his prosthetic leg, and when he still was in treatment some people gazed at his bald head. But here’s what Carter really wants people to see in him: He is active and athletic. He can complete the aerial course at Mount Sunapee without fear or difficulty. And soon, he will ski and play hockey again.

September is Childhood Cancer Awareness Month – and this month, Carter and other children at Dana-Farber/Boston Children’s are sharing this message: We are more than you see. Don’t focus on the side effects of our treatment – see who we really are. Learn more and see more stories at DanaFarberBostonChildrens.org