Balloons of various colors are taped in a row across the wall. Twenty yards away, 8-year-old Dylan Berio announces “yellow,” pulls back the string of his bow, then releases – smiling as he hears the “pop.” His arrow successfully pierced the yellow balloon.

Archery requires focus and precision – something Dylan has in ample quantities. That would be impressive in its own right – but it’s even more remarkable given that he’s been on and off chemotherapy since age 3 ½ to treat pilocytic astrocytomas (brain tumors). As a result of the tumors, he has lost most of the vision in one eye and he needs glasses for both eyes. Nevertheless, when Dylan stands with instructor Chris Reedy at the archery range, he is focused and engaged.

Dylan was diagnosed with brain tumors in 2011. He had two surgeries and receives chemotherapy. To monitor potential changes, Dylan has an MRI every three months. Currently, Dylan’s tumors are stable, but an MRI last January had revealed progression in the tumors.

When Dylan’s mom, Dawn, shared that news on Dylan’s Facebook page, Chris Reedy, owner of Reedy’s Archery in Middleborough, Massachusetts, immediately reached out. He suggested Dylan stop by his archery range and learn to shoot arrows. He thought it might prove therapeutic.

Dylan took to archery right away. After a few sessions of borrowing equipment, Dylan received a gift from Reedy – a bow and arrows of his own. Dylan chose a black bow with a green string, and arrows with orange and white flights (feathers). 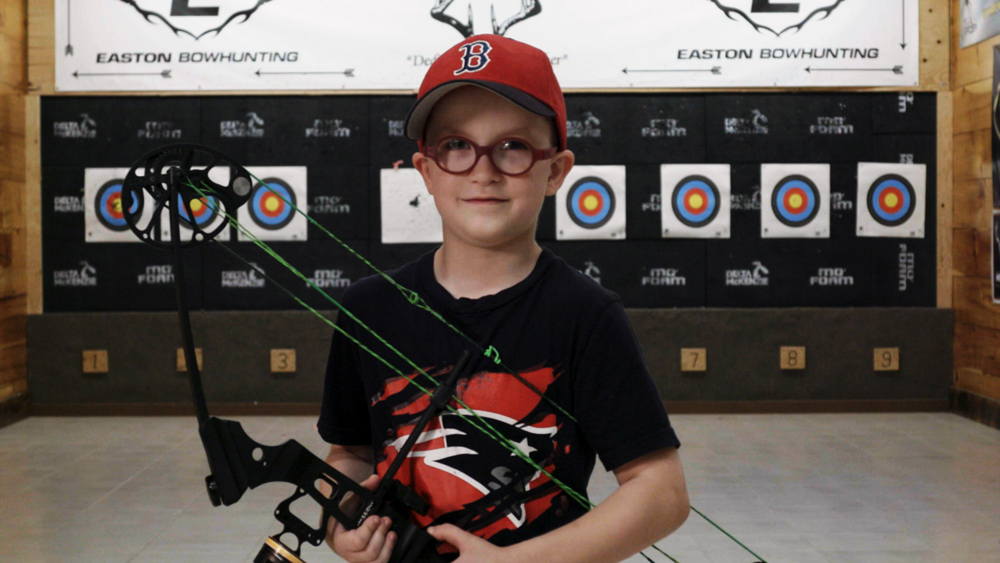 On a day in late July, Reedy sits beside Dylan to coach him along. But when Dylan shoots the arrow – it’s his own muscle and focus that direct the arrow into the balloons. “He has his good days and his bad days,” says Reedy. “But I can tell when he’s focused.”

Sometimes, Dylan sees people stare at his bald (or near-bald) head or the scars on the back of his head – and he doesn’t like it. That’s because Dylan wants people to see him as he sees himself: He is active and playful. He can shoot an arrow with the precision needed to pop a balloon 20 yards away. He also loves Legos toys, Matchbox cars – and to ride a kid-sized 4×4 off-road vehicle with a friend outside the archery shop.

September is Childhood Cancer Awareness Month – and this month, Dylan and other children at Dana-Farber/Boston Children’s are sharing this message: We are more than you see. Don’t focus on the side effects of our treatment – see who we really are. Learn more, see more stories, and join the campaign at DanaFarberBostonChildrens.org/MoreThanYouSee