One of the primary goals of today’s breast cancer research is to personalize the treatment of the disease, tailoring therapies to the specific characteristics of each patient’s cancer.

“The future of breast cancer therapy is tied to the idea of individualizing treatment for each patient — not only to the stage and subtype of the cancer but also to a patient’s response to prior therapy, as well as the molecular makeup of the tumor cells and state of the patient’s immune system,” says Sara Tolaney, MD, MPH, associate director of the Susan F. Smith Center for Women’s Cancers at Dana-Farber and director of clinical trials in the Institute’s Breast Oncology Program. “Research being done today is increasingly making that possible.”

Here are some examples of recent advances in treatment.

The U.S. Food and Drug Administration (FDA) has approved a new two-in-one therapy for patients who have undergone at least two prior treatments for metastatic, triple-negative breast cancer. The therapy, called Sacituzumab govitecan, consists of an antibody bound to a chemotherapy drug, an arrangement that harnesses the antibody’s cancer-seeking ability as a delivery agent for chemotherapy. In clinical trials, the therapy, known as an antibody/drug conjugate, showed a clear survival benefit for many patients. Dana-Farber investigators are now studying its safety and effectiveness in combination with other therapies, including immunotherapy agents.

Two new drugs for metastatic HER2-positive breast cancer — marked by an excess of the HER2 protein — received FDA approval in 2020, based on the results of clinical trials led by Dana-Farber investigators.

Trastuzumab deruxtecan, another antibody/drug conjugate, was approved after the DESTINY-Breast01 clinical trial led by Ian Krop, MD, PhD, showed it produced responses in more than 61% of patients who had undergone at least two previous treatments with anti-HER2 therapies. The median progression-free survival — how long patients lived before the disease worsened — was 16.4 months, substantially longer than in any other study of patients with pretreated HER2-positive metastatic breast cancer.

The HER2-targeting agent tucatinib was approved in combination with trastuzumab and the chemotherapy agent capecitabine for patients with at least one prior treatment with anti-HER2 therapy. In the HER2CLIMB trial, led by Eric Winer, MD, 33% of patients who received tucatinib, trastuzumab, and capecitabine were alive at one year with no worsening of their disease, compared to 12% of those who received trastuzumab, capecitabine, and a placebo. The two-year overall survival — the percentage of patients alive two years after the start of treatment — was 45% for the tucatinib group and 27% for the placebo group. Among patients whose cancer had metastasized to the brain, 25% of those in the tucatinib group were alive with no advance of the disease a year after beginning treatment, compared to none in the control group.

Dana-Farber researchers have begun studying combinations of these agents with other drugs. Clinical trials of tucatinib and the drug conjugate T-DM1 have opened for patients with either early-stage or metastatic HER2-positive breast cancer. And trials combining trastuzumab deruxtecan with tucatinib or with immunotherapy agents are planned.

Recent research has provided exciting findings for preventing the recurrence of this type of breast cancer, which grows in response to the hormones estrogen or progesterone. Data from the monarchE clinical trial show that the drug abemaciclib — a CDK4/6 inhibitor that interrupts the process of cell division in cancer — helps prevent cancer recurrence in patients with high-risk, early-stage hormone receptor-positive breast cancer.

Learn more about breast cancer from the Susan F. Smith Center for Women’s Cancers at Dana-Farber. 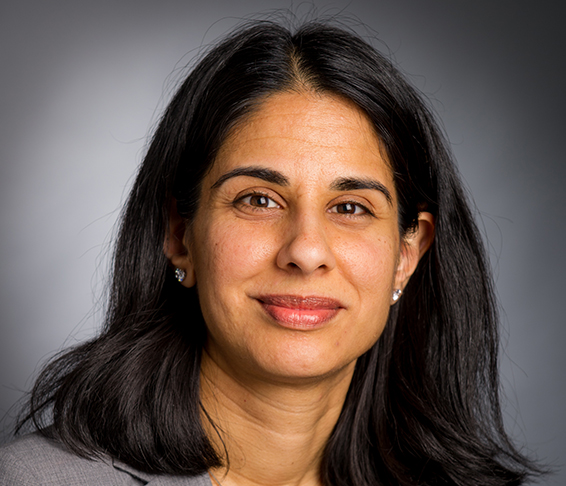 Dr. Tolaney received her undergraduate degree from Princeton University in 1998 and her medical degree from UC San Francisco in 2002. She subsequently completed her residency in Internal Medicine at Johns Hopkins University, and fellowships in hematology and medical oncology at Dana-Farber Cancer Institute. She obtained a Masters in Public Health from the Harvard School of Public Health in 2007.

In 2008, she joined the staff of Dana-Farber Cancer Institute and Brigham and Women's Hospital, where she is a medical oncologist and clinical investigator in the Breast Oncology Center. Her research focuses on the development of novel therapies in the treatment of breast cancer.