Ingersoll “Sandy” Cunningham has the dignified, silver-haired appearance of a man you’d expect to find sipping tea with friends. So what is this Harvard-educated great-grandfather doing pushing food carts through the hallways of Dana-Farber, handing out sandwiches to patients?

“You’ve got to have some objective when you get up in the morning, a purpose and a place to be,” a retired investment advisor who has spent the last 20 years serving lunch to cancer patients off a food cart as a weekly volunteer at Dana-Farber. “This is mine. I used to take care of people and their money; now I take care of people facing cancer.”

Possessing a warm smile and gentle, mischievous manner, Cunningham knows just how to put patients at ease. He loves making them laugh, whether by singing “going to get the Mayonnaise” while searching his cart for condiments or by donning a tuxedo, top hat, and red clown nose during his shift, as he did for years on Valentine’s Day. 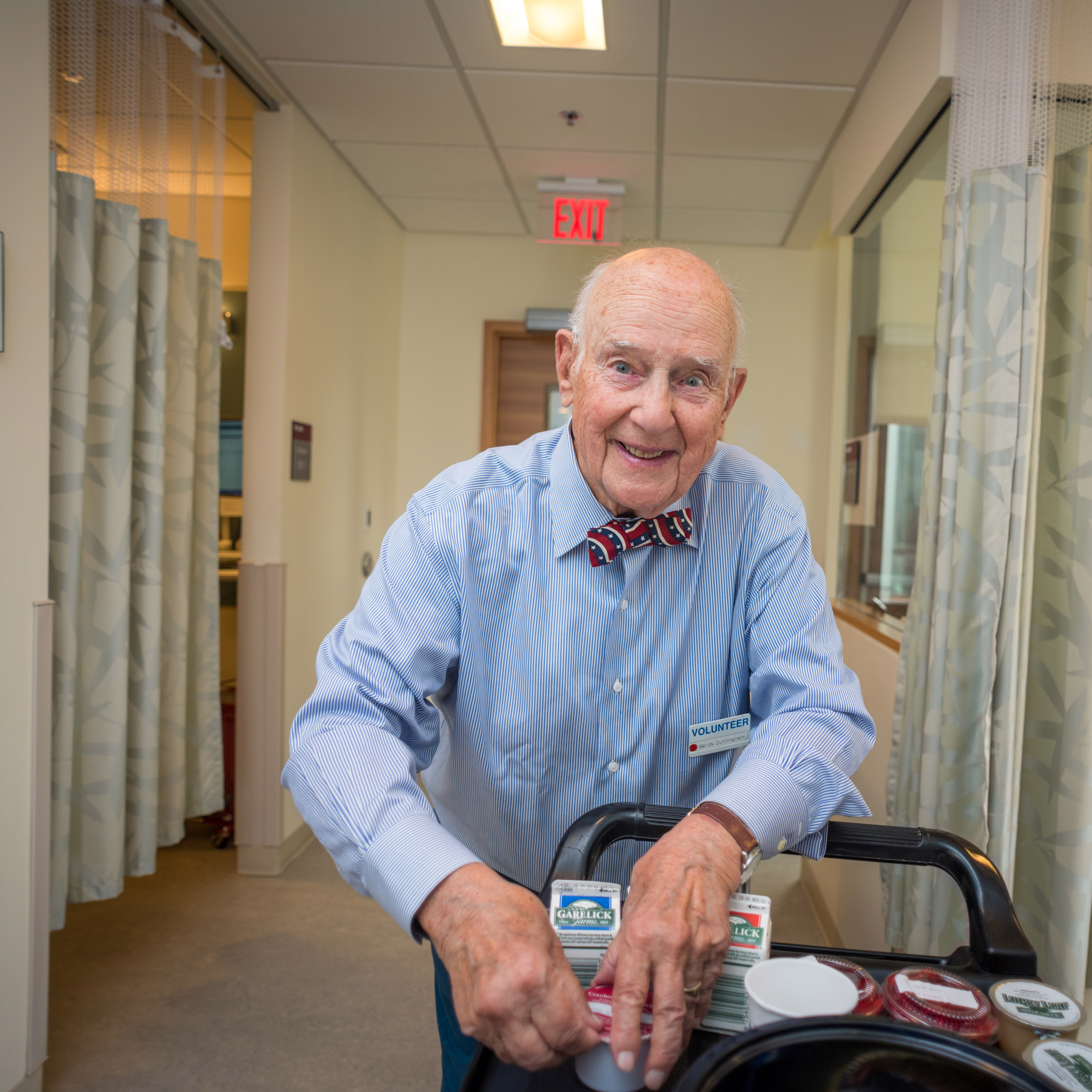 Most importantly, he understands just what patients and families are going through—because he’s been there himself.

His wife of 56 years, Sheila, died of cancer. So did two of her brothers, two sister-in-law, and his own two brothers. Sandy has prostate cancer, and, like Sheila, was treated at Dana-Farber. Most recently, he’s been there for his daughter Jen’s cancer experience. He knows the drill.

“These patients often have a long drive in, and then need to give blood, meet with their doctor, and get a chemotherapy infusion,” Cunningham explains. “They welcome the chance to talk, and I get—and learn—so much from them.”

Approaching patients at their infusion chairs, Cunningham’s eyes sparkle and his voice rises with enthusiasm as he rattles off his menu of offerings. Then, after delivering their tuna on wheat or bag of chocolate chip cookies, he chats with them about their lives outside Dana-Farber.

“He’s a character, and so friendly,” says Deb Graff, a multiple myeloma patient. “Because of his own experience, he brings a lot of credibility to his job.”

“Sandy is full of a joy for life that’s evident the second you lay eyes on him,” says Patricia Stahl, M.Ed, senior manager of Volunteer Services and Programs at Dana-Farber. “He adds courage, humor and kindness to each sandwich he serves.” 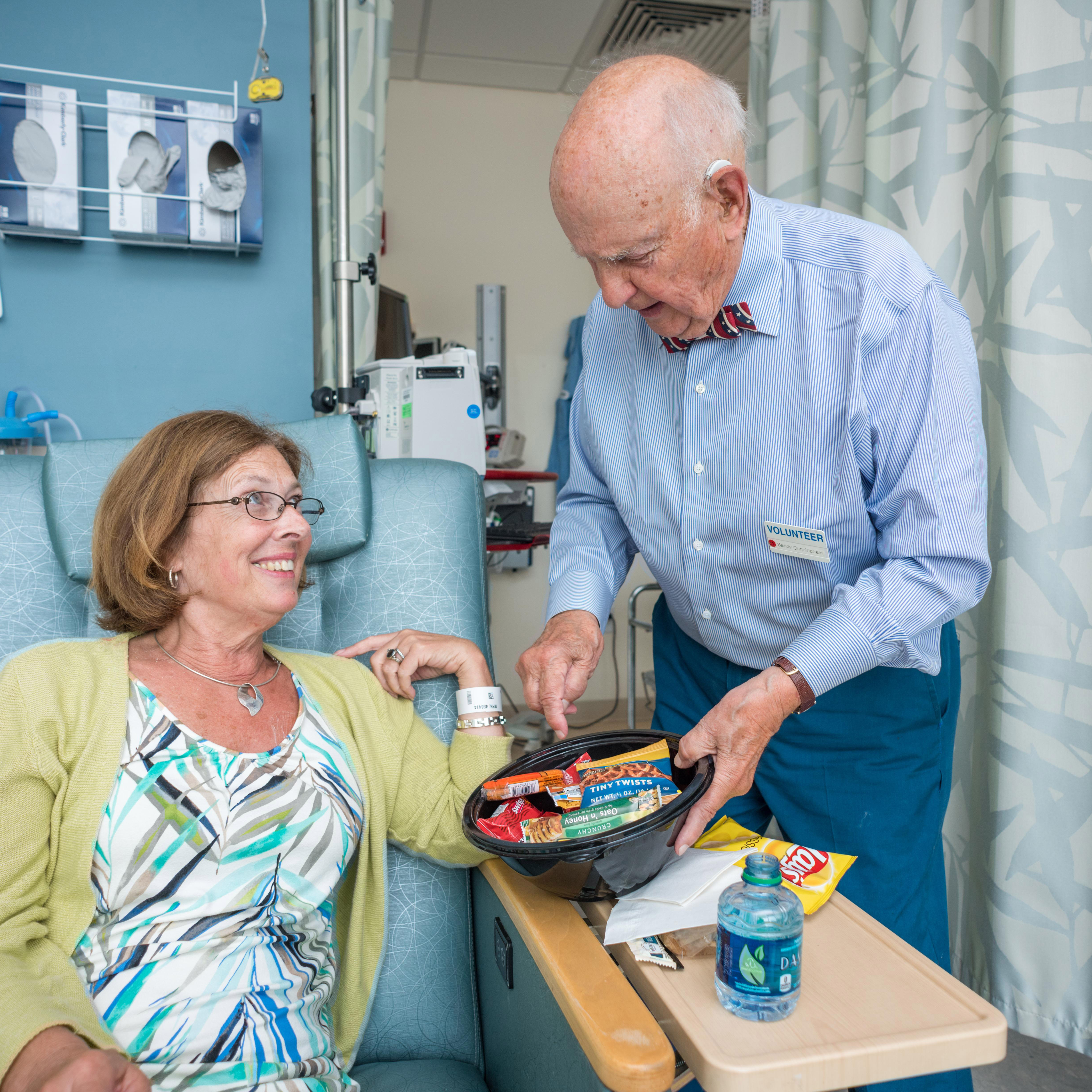 Asked about the prime motivations for his volunteerism, Cunningham cites two: his late wife and his father.

“Sheila was the greatest human being I’ve ever met, and I’ve known some real Cracker-Jacks,” Cunningham says in his trademark folksy style. Founding president of the Friends of Dana-Farber Cancer Institute, an all-volunteer giving organization that has allocated more than $35 million to cancer research, care, and support programs at Dana-Farber, Sheila Cunningham devoted her life to helping others in addition to raising their five children. One of their daughters, Jen, is a past co-president of the Friends and currently vice president of patient services for the group.

“It’s just a wonderful, giving family,” says Dawn Belizaire, program director for the Friends. “Sandy is a sweetheart who tells the funniest jokes.”

Sandy’s father, John H. Cunningham, MD, was a surgeon who let his son follow him on his rounds as a young boy. Although the family lived comfortably, Dr. Cunningham reminded his children that “everybody pulls the oar.” This included a stint for Sandy in the Navy during World War II, which interrupted his years at Harvard.

“We were damn lucky, and he never let us forget it. He expected us to always make time for others.”

That is why, retired after more than 40 years with Bank of Boston, and married to his and Sheila’s dear friend, Joanna, Sandy keeps pulling the oar.

“There is never a day when somebody doesn’t say, ‘I am so thankful for what you do for us,’ says Cunningham. “As a volunteer, that’s our payment. And I hope that after seeing my story, more people consider joining us.”

26 thoughts on “For 95-Year-Old Dana-Farber Volunteer, Serving Cancer Patients is a Proud Privilege”